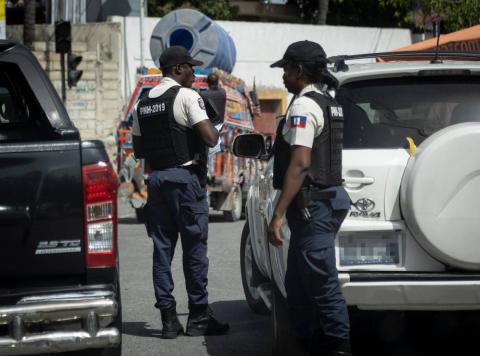 ‘Luck and God’: How Haitians survive gang violence, kidnappings in their nation’s capital

This teeming Caribbean capital, with its hair-raising traffic, army of sidewalk vendors and once vibrant nightlife, is now a metropolis that lives only by daylight. People leave home only after sunrise and hurry back before sundown. They lumber along traffic-clogged main roads rather than take shortcuts, and zip through empty streets at top speeds. Instead of driving to the beach, they go to hotel pools — preferably one close to home. “Even in the daylight, there’s still a high risk,” said Cédrice Joseph, 18, attending his high school graduation from Lycée Alexandre Dumas at the Karibe Hotel in Petionville in late June. “I won’t say it’s safer at day than at night; really, it’s anytime you go out or are at home.”

Following the assassination of Haitian President Jovenel Moïse a year ago, the private international school, more commonly known as Lycée Français and run in conjunction with the French ministry of education, closed its doors and went indefinitely on remote learning due to security concerns. Those concerns have only deepened during the past year amid reports of students and parents elsewhere being kidnapped and held hostage by gangs demanding ransom. “It’s been pretty hard knowing that sometimes you can’t go to school, or you’re not sure if you’re going to be able to come to school and learn ... or if today is your last, or if you’re going to get kidnapped every time you’re in the streets,” said Joseph, dressed in his cap and gown. Describing what living in a captive country is like, he said, “It’s luck and God.”

As kidnappings spike and gangs extend and tighten their grip on metropolitan Port-au-Prince — after seizing the main courthouse in downtown last month, gangs now have their sights on the ports — Haitians are increasingly feeling helpless. Collapse: Disaster in Surfside What went wrong in Surfside? Listen to our new 12-part investigative podcast READ MORE Some people are taking steps to protect themselves, though they are not cheap and are psychologically taxing. Rottweilers are priced at $1,500 a pop, and armed guards are big business. So too are armored cars for those who can afford them. For those who can’t, even the most mundane of errands here have now become a perilous exercise in risks and distance. “You are risking your life out here,” said Edy Remy, 53, a lone vendor on a sidewalk in Pacot, the residential neighborhood south of downtown where he supports his four children by selling bread.

With gang graffiti scrawled on the wall behind them, women sell their wares on the street of Port-au-Prince on Tuesday, June 21, 2022. Jose A. Remy says it’s easy to become discouraged with Haiti’s descent into the abyss and change “for the worse” as it becomes marred by the kind of violence he didn’t see even during the days when dictators ruled the country. “We didn’t have this in ‘85. We didn’t have this in ‘86, not even in ‘87,” said Remy, referring to the last days of the nearly 30-year father-son Duvalier dictatorship, which ended in 1990. “The decline of the country started in 1990; ever since then Haitians have been afraid to take to the streets.”

While people in other countries hole up in their homes because of COVID-19, Haitians note that in their case it’s been due to a different kind of pandemic. Kidnappings and intentional homicides, according to the United Nations’ Haiti office, have risen by 36% and 17% respectively, compared with the last five months of 2021. In May alone, the Haitian National Police reported 200 kidnappings, an average of almost 7 cases per day. A report by the local Center for Analysis and Research in Human Rights, which monitors kidnappings, says the total for the year has already surpassed 290. The spike in crime comes on top of double-digit inflation that has been rising month after month, chronic fuel shortages, soaring prices and political paralysis that has deepened after the assassination of Moïse. In the upscale mountaintop Pèlerin neighborhood where Moïse lived, red and white signs on electrical poles feature the number for a hotline that residents can call in case of trouble.

And for good reason. Gangs are increasingly targeting places where the well-to-do live, and even diplomats are not immune. Three United Nations employees were recently abducted, along with two consultants from Belgium. They were later released. The first half of this year saw the abductions of 40 foreign nationals, compared to 53 for all of last year, according to the nonprofit Center for Analysis and Research in Human Rights in Haiti. Among the victims was a security guard working for Helen La Lime, the representative of the United Nations Secretary-General and head of the Integrated Office of the U.N. in Haiti. The guard was kidnapped on the morning of May 23 in Torcel while in a U.N. mission car. He was eventually released on June 10 without a ransom payment Ransom demands, according to a report by the human rights center, go as high as $1 million.

Though families end up negotiating down, kidnappings are still “a highly profitable criminal enterprise,” the report’s author, Gédéon Jean, noted. A man walks by graffiti on a wall demanding justice for slain President Jovenel Moïse in Petionville. Normally the street would be clogged with bumper-to-bumper traffic. But fear has many people staying off the streets or going home early. Jose A. Iglesias jiglesias@elnuevoherald.com The fear of being kidnapped or killed is so pervasive that spouses track each other’s commutes by calling people along the travel route, and working parents live away from home during the week to cut down on their commutes. In other instances, businesses have been left with no choice but to close or abandon certain areas. After four delivery employees of a large hardware company were killed during an armed attack on a national road, their employer, MSC Group, issued a note saying, “Fathers of families and brave workers lost their lives brutally and inhumanely, while they were only engaged in a legal activity to earn their daily bread.”

Unable to depend on the police or politicians for safety, some Haitians have chosen to organize themselves, forming neighborhood watch groups on the WhatsApp social media platform, where they exchange information about suspicious activities, break-ins and kidnappings. Once relatively safe, the Pacot neighborhood on a mountain slope, characterized by its historic gingerbread homes on large lots with high walls and green foliage, isn’t immune to Haiti’s crime wave. Homeowners turn to a chat group on WhatsApp to keep each other informed. They also use the app to raise money to subsidize fuel for police cars in order to guarantee regular security patrols of the neighborhood and speedier response times in emergencies. The fuel subsidies started when the inspector in charge of the local Canape Vert police substation complained that he had two patrol cars with no fuel. After neighbors raised about $100, the contributions have now risen to about $250 a month to gas up eight police vehicles, said one of the group’s founders, who declined to be named for fear of being targeted by gangs. “If security here was at two, we are now at five,” the homeowner said as his wife chimed in that it’s more about the psychological comfort than real safety. Residents of Pacot for over 50 years, the couple rarely venture outside. When they do, they have armed guards and two dogs. Neither has been able to visit property they have in Jacmel in the southeast during the last two-and-a-half years, and in the wife’s case, she’s been unable to get to her factory or her church. “I cannot get there.” “It’s as if I had a passport and they took it away,” she jokes, trying to make light of what she and her husband admit is a “very stressful” situation. Haiti National Police officers check identifications at a checkpoint in Port-au-Prince on March of last year, the Pacot area registered at least three abductions in one day between 7 a.m. and 9 a.m.

One of the victims was plucked from her Toyota SUV by heavily armed individuals as she was taking her daughter to school. Another victim was an executive at the country’s central bank, and the third was the husband of a government minister. More recently, a man was killed after trying to fend off his abductors and left in a pool of blood on the street. Residents say police enforcement is still limited. Some homeowners have been calling for the immediate cessation of public pool parties in the community known as “Santorini-en bikin-tout-nu,” where young women are encouraged to remove their bikinis to the sounds of screams and blaring music. But police have allowed the parties to go on, despite fears that such activities could invite gang violence. Elsewhere across the capital, people are just as fearful. “Before you used to be able to be open until midnight; no one does this anymore,” said Abner Exilie, 49, standing in front of his street lottery business in Tabarre, where he currently lives after being forced to move from the Croix-des-Bouquets area because of rising crime. “Now, everyone is afraid to be in the streets. Once 7 p.m. hits, I can’t stay here anymore. I have to leave.”

After police arrested the alleged leader of the gang Baz Pilat, Ezéchiel Alexandre, and a former police officer accompanying him in June, Alexandre’s gang followers began spraying automatic gunfire in the central areas of the capital. They demanded the release of Alexandre, who is accused of assassination, illegal possession of firearms, rape and armed robbery. FAMILY SEPARATION Up until six months ago, Samuel Ambroise used to take his chances commuting back and forth to his logistics job in Petionville from his home in Carrefour, the sprawling suburb that serves as a gateway to four regional departments south of the capital. But as armed clashes between warring gangs intensified in Martissant — which residents of Carrefour have to cross to get to Port-au-Prince — passage along the national road became deadly and Ambroise, who has a 3-month-old daughter, was forced to make a difficult choice: Live away from home during the week. “I have no choice but to spend the week in Petionville and go to Carrefour on the weekends,” he said. “It’s really hard when you have your family and spend a week unable to see them.”

To get to Carrefour, he takes a previously little-used route through the mountains above Port-au-Prince. Named after a Catholic Church in the area, the unpaved St. Jude road was built back in 1999 as a shortcut to the south that avoided having to cross through Petionville or downtown Port-au-Prince. Now it’s become a life-saving means to avoid deadly gangs. Legions of commuters on motorbikes, buses and private cars use it every morning, an example of how the gang violence is affecting even rush-hour traffic patterns. “It’s not an easily accessible route,” Ambroise said about the road, which has fallen into disrepair over the years and is almost impossible to cross during heavy rainstorms. Both the commute and the separation from his family, are tough, said Ambroise, who stays with a friend during the week and now finds himself supporting two households on his small salary. Being away from his family during the week means he’s missing out on their lives, especially his 3-month old daughter’s. “It’s frustrating. You are living in the same country with your child … and then you see her do something and you say to yourself, ‘How come I didn’t know she could do this?’

This story was originally published July 8, 2022 10:15 AM. JACQUELINE CHARLES 305-376-2616 Jacqueline Charles has reported on Haiti and the English-speaking Caribbean for the Miami Herald for over a decade. A Pulitzer Prize finalist for her coverage of the 2010 Haiti earthquake, she was awarded a 2018 Maria Moors Cabot Prize — the most prestigious award for coverage of the Americas.