Gangs Steal Maternity Hospital's Generator - Now It Has to Close 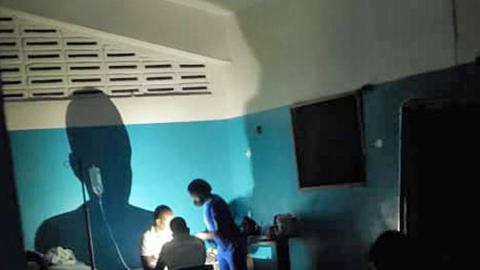 A kidnap gang stole a maternity hospital’s new generator in Haiti. Now it has to close

After a violent gang in Martissant stole their generator on Wednesday, nurses and doctors at Sainte Croix Hospital in Léogâne, Haiti, were forced to use the flashlights on their cellphones to provide care to patients. The hospital’s director has announced he has no choice but to shut down.  For the past three years, Sainte Croix Hospital, a rural 90-bed medical facility south of Haiti’s capital with the only maternity and neonatal wards for miles, has endured almost every emergency imaginable in a country besieged by clashing armed gangs and economic collapse. Life and death decisions over who gets the last supply of oxygen before new tanks arrive by boat. Subsidized medical care because those needing it can’t afford the symbolic $3.50 specialist fee, much less the taxi ride to its front door in rural Léogâne. Postponed medical procedures because of power blackouts, a lack of fuel or a broken generator. While none had managed to force the hospital’s closure, the latest crisis has.

On Wednesday, kidnap gangs from an hour east in the Port-au-Prince neighborhood of Martissant heisted the hospital’s delivery truck along with its two drivers and newly purchased — and still not yet paid for — $38,000 generator, forcing the hospital leadership to do what they had long resisted: close their doors. “We have no choice,” said the Rev. Jn Michelin St. Louis, director of the hospital, which is run by the Episcopal Church. “It’s with a heavy heart that we are making this decision because we know it will have disastrous consequences. We know a lot of people will die, but we really do not have a choice.”  St. Louis announced that Sainte Croix is closing — unless staff can get a new generator donated, or the gangs are benevolent enough to return the stolen 120-kilowatt one they are holding hostage for ransom.

“When people come, we are telling them that we cannot receive them because we have no electricity,” St. Louis said, noting that there are 55 hospitalized patients who are slowly being discharged. “Those who are already here, we will continue to provide care until we discharge them so that we can close the hospital’s door.” What it means, he and one of his doctors said, is that the region’s sick who have long relied on the hospital will have to seek assistance elsewhere in the south, risk dying at home, or cross gang territory to get help in Port-au-Prince.

“People will be in great difficulty,” said Dr. Pierre Wilson Romestil, an obstetrician-gynecologist who has worked at the hospital for the past six years. “We are like the General Hospital of the Great South, and when you consider the negative consequences of closing, it’s really hitting us hard.”   Sainte Croix is the latest hospital to become a victim of Haiti’s gang epidemic. Last year, two hospitals in Martissant — one run by the French medical charity Doctors Without Borders/Médecins Sans Frontière and the other by DASH, a network of eight private hospitals and clinics that operate in the capital — were forced to close after warring gangs began shooting at each other from their facilities. Sainte Croix hopital began as a clinic in 1968. In 2010 it managed to sustain only minor cracks in the earthquake that rocked the region and brought down structures around it. But after years of facing one natural disaster after another, it now finds itself in the cross hairs of Haiti’s mushrooming gang problems.

Specialists, doctors and the sick are unable to cross gang-controlled Martissant, which has created pressure on the hospital as patients show up suffering with everything from COVID-19 to preeclampsia — the dangerously high blood pressure afflicting some pregnant women — to elephantiasis. The hospital offers the only clinic in all of Haiti to treat the painful disease where one leg is larger than the other. This is not the first time that Haiti’s gang problems have threatened operations at the facility. After a violent gang in Martissant stole their generator on Wednesday, nurses and doctors at Sainte Croix Hospital in Léogâne, Haiti, were forced to use the flashlights on their cellphones to provide care to patients. Hospital director Rev. Jn Michelin St. Louis has announced he has no choice but to shut down.

During the gang-aggravated fuel crisis last fall, the hospital was forced to sound the alarm after it started running out of oxygen for 20 babies in its neonatal ward. The children managed to survive after the government sent oxygen and fuel by boat, because gangs made road passage from Port-au-Prince impossible. “If we didn’t issue that appeal, patients would have died,” St. Louis said. The current problem, he said, is twofold. There are the violent gang clashes in Martissant, which has led to the forced displacement of more than 19,000 Haitians since June and increased pressure on the hospital because the violence has cut off five regional departments from Port-au-Prince. And then there are Haiti’s perennial blackouts, even though a power plant is nearby in Carrefour. For the past five years, St. Louis said, Sainte Croix Hospital has been relying solely on generator power because there is no consistent electricity in Léogâne, where there is no public hospital.

When the state does manage to provide power, it’s been too weak to run the hospital’s equipment. The hospital’s generators are at least 20 years old, and after repeated repairs, the last working generator finally broke down, forcing St. Louis to purchase a new generator on credit, he said. This was the 120-kilowatt generator that was stolen Wednesday when bandits stopped the truck as it traveled south to Léogâne from Port-au-Prince. “We’ve had a huge power crisis since Wednesday,” St. Louis said. Romestil said staff morale has been hit hard by the latest crisis. A resident of Port-au-Prince, Romestil, 41, braves the gang-plagued roads at least twice a week to make it to work, paying four times the normal passage to cut through back roads. Rather than go home at the end of his shift, the married father of a 3-year-old daughter says he stays for days on end in Léogâne to avoid the risk of going back and forth. “It’s a lot of stress because you really can’t control the situation,” he said about his journey, admitting that lately he had been asking himself if the risk was worth it. And then there is work.

“The operating rooms are not enough. All of the sick flood us and we are doing six to seven cesarean-section deliveries a night,” Romestil said. “We are seeing in maternity, for example, numbers we have never seen before, already surpassing more than 100 deliveries just last month. “The other hospitals, private and government, that used to relieve the pressure on us are in difficulty,” he added. “They cannot get anesthesiologists or other specialists who used to come from Port-au-Prince because of the situation at Martissant.” Haiti has the highest maternal mortality rate in the Western Hemisphere, with an estimated 480 deaths for every 100,000 live births compared to 75 for Latin America and the Caribbean, according to the World Bank, which has tracked outcomes and spending in the country.

Meanwhile, the infant mortality rate is about 50 deaths for every 1,000 births, compared to 16 for the Latin American and Caribbean region. What this means is that many pregnant women, especially those in poor rural communities like Léogâne, face enormous challenges in not just receiving prenatal care, but in delivering safely. With government-operated hospitals often lacking even the basics and the population unable to afford medication, many women risk dying in childbirth or shortly after. St. Louis said this is why his facility, which offers a number of other medical services, has become the hospital of choice for expectant mothers, who make up the majority of patients occupying the 90 beds inside the multi-story building and the 30 beds in a guesthouse. “It is the only hospital in the entire region where regardless of what time a pregnant woman shows up, she will find services available, whether it’s to do a simple delivery or a cesarean section,” he said.

This was reinforced in December, when hospital staff had to place 40 extra mattresses and beds in the hallways for deliveries. “It was really difficult for us,” he said. “We had a doctor who was working and said in a 24-hour period, he did nine cesareans.” The closure means that pregnant women, who come from as far away as the port city of Jacmel in the southeast, will now have to go to one of the poorly resourced public hospitals or risk death by crossing gang gunfire into Port-au-Prince, where St. Damien Pediatric Hospital runs a maternity department and offers one of the country’s few neonatal intensive care units. It also means that 200 people, including 25 doctors and 65 nurses, will be out of work. “Before I can think of those who are going to be unemployed, I am thinking about those who are going to die,” St. Louis said.