Cholera Arrived 10 Years Ago. Victims are Still Waiting for Compensation 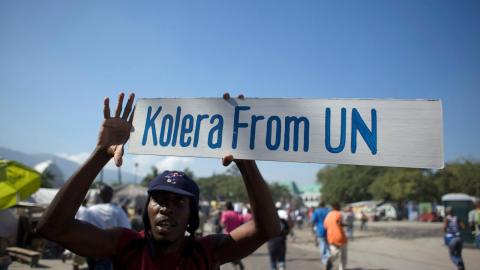 It started as rumor: farmers in Haiti’s Artibonite Valley were dying after drinking unchlorinated water from the Artibonite River, becoming dehydrated and suffering severe diarrhea. Haiti’s health ministry, on guard for an outbreak after the devastating Jan. 12, 2010, earthquake left more than 300,000 dead and 1.5 million homeless nine months earlier, suspected it could be cholera, the deadly waterborne disease. The representative of the Pan American Health Organization, however, dismissed the possibility. The mortality rate, he told journalists, was too high. Specimens were eventually taken on Oct. 18 and 19 from rice farmers who drank from the river and Haiti’s National Public Health Laboratory confirmed that cholera — a disease that had never been reported in the country — was now in Haiti. The government made the official announcement on Oct. 21, 2010, nine days after the first cholera case was detected near Mirebalais.

In the decade that has followed, more than 10,000 Haitians have lost their lives, advocates say, and another 850,000-plus have been infected. After years of denying its role in introducing the disease in Haiti, and refusal to accept any moral responsibility for the outbreak, the United Nations finally did so publicly in 2016. That came two years after the U.N. secretary general had admitted to the Miami Herald that the U.N. “has a moral responsibility to help the Haitian people stem the further spread of this cholera epidemic.

The 2016 admission came after press reports and a scientific study reported that blue-helmet peacekeepers from Nepal had infected one of the tributaries of the Artibonite River, which played a significant role in the disease’s rapid spread. The contingent had set up camp in Meille, a small village south of Mirebalais in Haiti’s central plateau, and sewage waste had been improperly disposed of in the Meille tributary. Haiti has now gone 21 consecutive months without a recorded case of the disease — an indication that cholera may be close to eradication in the poverty-stricken nation. But victims, their lawyers and advocates continue to criticize the U.N. and successive Haitian governments for the disease’s mishandling. They note that 10 years after cholera’s introduction into Haiti, there still has been no justice for the victims, and the U.N.’s member states still refuse to adequately contribute to a victims’ support fund.

“We’ve held a lot of peaceful marches, we’ve had a lot of meetings and nothing. Today, there are a lot of children who do not know their fathers, who do not know their mothers,” said Berthony Clermont, who participated in a day of reflection Wednesday to commemorate the anniversary and is an advocate on behalf of those demanding U.N. compensation for victims. “For us, it’s abuse. It’s abuse because the United Nations has never taken a decision to compensate the victims.  Beatrice Lindstrom, the former legal director for the Boston-based Institute for Justice and Democracy in Haiti, agrees with Clermont’s sentiments. “We thankfully are at a point where the epidemic seems like it’s under control. It may be possible to eliminate it,” Lindstrom said. “But when it comes to the lives that were lost, the families that were impacted, we really haven’t seen anything meaningful happen for them.”

In 2013 the institute, which works with thousands of Haitian cholera victims through the Bureau des Avocats Internationaux, BAI, a Port-au-Prince-based human rights legal firm, filed suit in the Southern District of New York on behalf of 5,000 cholera victims. The suit, similar to another, was dismissed by a U.S. judge. Earlier this month, Lindstrom, who is currently a lecturer on law and a clinical instructor in the international human rights clinic at Harvard Law School, moderated a Harvard Law School virtual discussion about cholera in Haiti: “10 Years On: Lessons from the Cholera Epidemic in Haiti.” The panel featured Mario Joseph, the head of BAI and the victims’ Haitian lawyer, along with representatives of three Haiti medical organizations that were on the frontlines of the response and the current U.N. Special Envoy to Haiti, Josette Sheeran, who is tasked with the cholera portfolio. Philip Alston, the former U.N. Special Rapporteur on Extreme Poverty & Human Rights, and Andrew Gilmour, the former U.N. Assistant Secretary-General for Human Rights, were also among the panelists. Both were critical of their former employer’s reluctance to accept responsibility, and the poor legacy it has cast of the U.N.’s involvement in Haiti.  “The tragic and deplorable fact is that 10 years after bringing cholera to Haiti through the negligence and mismanagement of its peacekeeping troops, the United Nations has still never acknowledged its responsibility, never apologized for having caused the cholera outbreak, and never provided direct compensation to the families of the more than 10,000 people who died as a result,” Alston told the Miami Herald Wednesday, calling it “a sad day.” “For those of us who have worked for and believed deeply in the U.N.’s overall mission, this is a dramatic breach of faith and should be a cause of shame both for those senior officials responsible for these policies and for the diplomats, including especially those from the United States, who have orchestrated this tragic abdication of responsibility.”

Berthony Clermont, 46, in blue, commemorates the 10th anniversary of the arrival of cholera in Haiti with other Haitians and victims of the disease at a Port-au-Prince hotel on Wednesday, October 21, 2010, in “A Day of Reflection.” Clermont, who contracted the disease in 2014, is an advocate on behalf of those demanding compensation from the United Nations.   In April, Alston was among 14 independent U.N. human rights experts who called on U.N. Secretary General António Guterres to “urgently step up efforts” to fulfill a U.N. pledge to help victims of the cholera epidemic.  During the virtual Harvard conference, Alston said successive governments of Haiti also share in the blame. They “have behaved very badly by refusing to promote or push for international accountability,” he said, referring to Haitian officials’ refusal to publicly make demands of the United Nations or its member countries.

The U.N., Alston said, never gave any compelling reasons for its refusal to accept responsibility for its role, “other than the assertion that this amounted to a political matter.” Gilmour, who recently retired from the U.N. after 30 years, told the Herald that the “real shame isn’t what happened on the ground.” “That was obviously a terrible mistake and a massive tragedy,” he said in an email. “The shame lies in the fact that our chief lawyer at the UN went to almost extreme limits to prevent any sort of meaningful apology or acceptance of accountability, when there was a real effort to go in that direction in 2016. What that did was expose the UN to the charge of total hypocrisy — more than any other act in the UN’s 75-year history. Because we rightly preach the need for accountability to everyone else but blocked it for ourselves when it came to this sorry episode. It was putting aside true UN principles and any compassion for Haitian victims in favor of cheap political expediency.”

During the conference, held on Oct. 10, Gilmour recounted that he had been told that “any admission of legal responsibility could lead to such enormous damages by a class action in U.S. courts by people they termed ‘ambulance chasers’ actually could lead almost to closing down the U.N.” “Many felt, including a number of legal scholars, that the U.N. could have gone out much earlier in terms of accepting moral responsibility and also showing far greater compassion for Haitian victims,” he said. Within the U.N., Gilmour said, many “felt very bad about this and actually felt that it was actually unconscionable what we were doing, at the behest of our legal advisers.”

As Gilmour exited the U.N. a few months ago, he wrote a memo to senior colleagues identifying some of the positive and less positive trends going on inside the powerful world body. Haiti’s cholera epidemic, he said, was among the incidents that brought deep shame within the ranks. “For many, nothing comes close to the ethical morass of our response on Haiti cholera,” Gilmour repeated during the conference. “Everyone understood the need to preserve the U.N.’s immunity. But our organization makes great play of demanding accountability on the part of others.... Presenting legal arguments against even the most limited accountability for that avoidable tragedy, while at the same time derisively rejecting arguments in support of the U.N. Charter and Haitian’s rights, may rank as the single greatest example of hypocrisy in our 75-year history.”

On Wednesday, Guterres’ office said that since the outbreak, the international community has spent over $705 million to fight cholera in support of the Haitian government’s national plan. The amount included more than $139 million mobilized by U.N. agencies. In a statement from the office of U.N. Special Envoy to Haiti Josette Sheeran about the 10th anniversary, Sheeran once more expressed regret. “The United Nations conveys its tremendous regret and sorrow at the profound suffering of Haitians affected by cholera as well as deep condolences to all those who have lost a loved one to this scourge,” she said. The office also called upon member states, which have largely refused to provided needed funding, “to put their financial backing behind the Secretary General’s New Approach to Cholera, with specific support for victims of cholera.“ “Haiti will be declared cholera-free by the World Health Organization after reaching three consecutive years with no new cases,” the office said. “Having made it two thirds of the way to this goal, no efforts should be spared to ensure that Haiti is firmly on the path to this momentous declaration.” Sheeran’s office has shied away from the question of individual compensation, preferring to highlight community efforts to eradicate cholera in Haiti’s Central Plateau, where the first outbreak happened before it spread deep into regions that require victims to travel hours on foot before receiving help.

The United Nations, privately, has resisted the idea of individual compensation. But the mechanics mean little to Clermont, who contracted the disease in 2014 and today advocates on behalf of others like himself, who lost not just family and friends to the disease, but in many cases, their entire livelihoods. “It’s true in 2016, they recognized that they were the ones who gave us cholera and asked for forgiveness,” Clermont, 46, said. “For us it’s important but it’s equally important that they compensate the victims. Ten years after cholera, four years after they admitted they gave us cholera, there is nothing concrete that has been done. They are always talking about projects.” “Part of the thing that’s been really sad is seeing this issue go completely silent at the U.N.,” said Lindstrom. “It’s hard to see how that isn’t partly responsible for the lack of momentum,” she said. “I feel like there has been generally a public perception this was taken care of in 2016, the U.N. apologized and there was this big plan.... The fact is nothing has happened.”