The Second International Haitian Jazz Festival provided an opportunity for many of Haiti's best musicians to showcase their talents.  Below, long time Haitian Culture Vulture Tequila Minsky writes about the St. Trinity Music School in Port au Prince, which is educating the next generation of Haitian musicians. 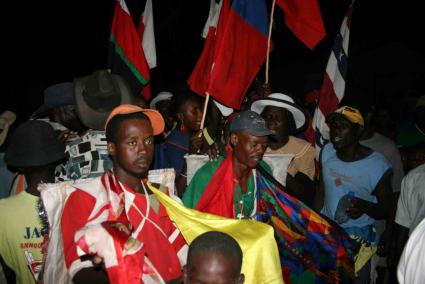 Sitting in Project Medishare's office in Thomonde, located in the Plateau Centrale, I overhear the sounds of pounding drums and overpowering song. During the days leading up from Carnival to Easter it is not unusual to come across a Rara band in the rural roads of Haiti. Especially in time for the final week of Easter, Thomonde has Rara bands parading down the streets with drums, maracas, guiros, and cylindrical metal trumpets. The bands construct unique instruments such as trumpets made from cans imprinted with "USAID Vitamin A Fortified Oil" to produce an amazing variety of rhythms and melody that attests to Haitians' creativity and inventiveness.