The 2008 International Jazz Festival of Port-au-Prince, presented by a host of sponsors and originally conceived by Joel Widmaier, the French Institute's Paul Levy, and Pascale Monnier, March 2-9, was a great success drawing more 13,000 music fans to four outdoor venues, with After Hours gigs in a restaurant jazz club setting.

The capital city of Haiti held the second edition of this eight-day international music event celebrating Haitian and world jazz music. The Jazz Festival represents exciting movement in the Haitian music industry and is a cultural force in this music-loving nation.

Joel Widmaier, co-founder of the Jazz Festival (along with Paul Levy of the French Institute and Pascale Monnier) is also a famous Haitian drummer from the group Zekle (one of the bands at the heart of the 1980s Nouvel Jenerayson movement), hopes the Festival will help promote Haitian Jazz across the country and perhaps the world. Thanks. "We have some excellent Haitian musicians playing jazz, and its a great movement to promote in Haiti. Joel and the Festival organizing committee, which includes the embassies of the United States, Brazil, Canada, Mexico, Switzerland, and the Haiti Cultural Ministry, seek to build on the success of the Jazz Festival from last year.

The Festival was not expected to draw foreign visitors; marketing tourism in Haiti is yet to be realized. There is one visitor from French Guyana who organizes a jazz festival in that South American country and coincidentally, one of the Mexican performers is a jazz festival organizer, too. For the Haitians of Port-au-Prince, the opportunity to listen to these styles of jazz is more food for the soul.

With a blend of a wide mix of Haitan and internationally renowned aritsts, the first two days of the jazz festival drew more than 10,000 concert goers at the historic "Canne a Sucre".

As this cultural celebration continues,the popularity continues with concert venues filled to standing-room. The French Institute, located downtown, offers an intimate outdoor venue inspite of its capacity of 1000. On Wednesday night, those that came out sought cover from the rain in overhang areas and, inspired by the high energy sounds of Haitian sax player Jowee Omicil from Miami, the majority of attendees stuck it out until the rain abated, loving his music. The following night, the band from Mexico, who had arrived from Miami that morning and had gone directly to teach a music workshop at the St. Trinity Music School, played the French Institute (with no rain!) The crowd just loved them, sitting at the edge of their seats and as one wise audience member said from the very last row, "Jazz used to be the music of the elite, but now everyone is catching it." The Mexican band Sacbe was followed by the Sirocco Trio from Chile.

Meanwhile the Champs Mars Concert had begun (on time!) with the band Jerez-Texas from Spain exuding a very Flamenco flavor. The plaza was filled with folding chairs so enthusiasts could properly enjoy the music, and they did. The last song, Color Cafe, with a rhumba rhythm, speaks of skin color. With the musicians encouraging the audience to sing the Spanish lyrics, the crowd was so involved when they sang the lyrics that after the piece was finished, they stood up waving their hands, continuing to sing the lyrics. They demanded an encore. How could the band refuse? The concert was broadcast live. 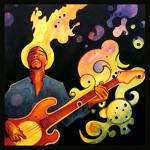 Following this band from Spain were Haitian and Haitian-America "all stars" led by Mushy on keyboard. The Haitian stellar percussionists including Azor and Joel Widmaier, on drums, saxophonist Jowee Omicil, engaged the fans. More than one young audience member proclaimed, "I love jazz, I love jazz." When pushed, one communication student admitted, "Konpa is number one; its my country's music, but jazz is number, two."

If that all wasn't enough, the Champs Mars Concert was follwed by a music session in a Petionville restaurant with all the day's musicians and then some, like Marc Richard on bass, jamming. This year's festival includes a series of music workshops, five held at St. Trinty Music School in the morning, and/or afternoon and at FOKAL. These workshops deal with everything from guitar and percussion, flamenco rhythms, singing, improvisation, arrangement and composition with Mushy, among the areas covered.