With gangs operating in almost total impunity throughout Port-au-Prince, catastrophic levels of hunger in some areas, and a growing cholera epidemic, the United States has decided to back a multinational rapid reaction force to Haiti.  This will not be a UN peacekeeping force and the USA is expected to play a major role in its operations.  At the same time, the USA has deployed a USAID Disaster Assessment Response Team (DART) and is expected to ramp up its humanitarian support.  The current situation is untenable and hopefully the multi-national force can help stabilise Haiti somewhat. The full article by MIchael Wilner and Jacqueline Charles in the Miami Herald follows.

According to the United Nations, over 470 people have been killed, injured or are missing in recent violence as gangs war with each other and the government.  Government officials have been told to stay home and the violence is getting closer to key governmental institutions including the National Palace.  This is not the first time that elites have used gangs as mercenaries and/or pawns for achieving their political or economic ambitions.  What is new is the sheer scale of the violence, made worse by illicit shipments of weapons.  The Haitian police are simply out numbered and out-gunned.  Unless the Haitian government and its partners can develop sufficient numbers of well-trained, well-armed, sufficiently paid and reasonable accountable police officers with the right leadership, the situation will only get worse.  The full NYT article by Maria Abi-Habib and Andre Paultre follows.

The investigation into the assassination of Haitian Presien Jovenal Moise has broadened to include law enforcement in both Haiti and South Florida, including finding those who provided logistical and/or financial support.  Part of the investigation is being carried out in Colombia given the significant role of hired Colombian mercenaries, both in custody and at large. The full article by Miami Herald journalists Kevin Hall, Jacqueline Charles, and Jay Weaver follows.

Haiti has submitted its first application to the UN Agency for Education, Science, and Culture (UNESCO) for international recognition of a cultural contribution to humanity. Win or lose, its entry of Soup Joumou (Pumpkin Soup) is a unique and delicious dish that is symbolic of Haiti's identiy and freedom.  As polarized as Haiti is right now, it helps to remember the things that unite people, one of which is a fondness for the country's national soup.  The full article by Miami Herald journalist Jacquline Charles follows.

Haiti makes some of the best rum in the world, the most iconic of which are made by Barbancourt.  Founded in 1862, it was now managed by CEO Delphine Nathalie Gardère. Barbancourt employs 500 people and works with 3000 local farmers making it a significant source of livelihoods.  Her goal is for Barbancourt to be an International Ambassador of sorts for Haiti.  Political unrest persists in Haiti - but so does the art, music, rum, humor, decency and everything else that makes Haiti unique.  Take a look at the full article in Sante Magazine, also copied below, and see if you can find or order a bottle of Barbancourt Rum.  You'll be glad that you did.

Haitian-Canadian filmmaker Michèle Stephenson’s documentary, Stateless, was the centrepiece film of this year’s Toronto Black Film Festival - which, due to COVID-19, was conducted online,  It examines the strained relationship between Haiti and the Dominican Republic and the consequences, sometimes violent, for Haitian migrant laborers and Dominicans of Haitian descent who, despite having been born in the Dominican Republic, continue to be denied citizenship due to racism and xenophobia.  A review by Sarah-Tai Black follows - a trailer is posted on The National Film Board of Canada’s Media Library and the documentary itself will follow. 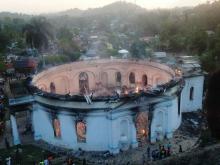 Haitians are, without a doubt, hard workers.   Most just want  opportunities, security, and for their familiies to have good lives.  Opportunity can be hard to come by in Haiti although some have found it in Tijuana.  In fact, the Mayor of Tijuana has praised Haitians for their work ethic and ability to integrate.  Given a chance, Haitians will prove themselves - whether in Miami, Montreal, or Tijuana.  The full article by Associated Press writer Julie Watson follows.

Haitian women are holding the country together - yet are vulnerable to gender-based violence and other abuses.  According to USAID, one out of every three Haitian women between the ages of 15 - 49 has experienced gender-based violence.  In this era of #MeToo, women are increasingly choosing to be voices for change instead of suffering in silence.  Haitian comedian Gaëlle Bien-Aimé is a brave Haitian comedian who has shared her experience as a rape survivor and became a human rights activitist.  Through her performances, her outreach, and her example she encourages other survivors to do the same.  Most about this inspiring activist in the full article below.

In the Caribbean, rum was born of pain and suffering but over time became an integral part of the identity of Caribbean countries.  Haiti is no exception - maybe I'm biased but I thnk Haiti has the most interesting rum in the world, ranging from Barbancourt 15 Years to the potent white rum of the countryside called Klerin.  Haiti's aged rums are ideal for enjoying neat - perhaps with just a bit of ice and a twist of key lime.  Klerin is gaining an appeciation by bartenders who appreciate its rustic, grassy flavors.  You don't have to get on an airplane to enjoy Haiti's rums although if you do, there will be no shortage of opportunities to try a range of traditional rums, infused rums, and rum-based cocktails.