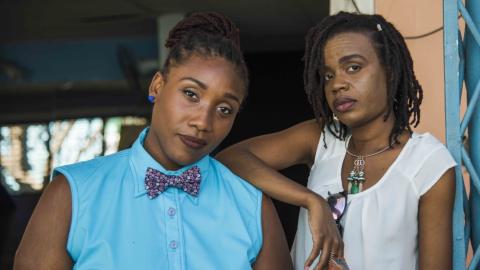 Gaëlle Bien-Aimé's presence never goes unnoticed. The 30-year-old woman is lively and has a contagious laugh — and it's no wonder that she’s a comedian, playwright and a vocal feminist. But her exuberance hides a wound that she finally confronted the day she spoke on camera about having been raped at the age of 6.   "I could recognize my rapist but I didn’t know his name. He used to climb over the mango tree. I couldn’t tell my mother," said Bien-Aimé in a video from Loop Haiti, an online news site, while struggling to hold back tears.  The internationally acclaimed Bien-Aimé of Haiti often speaks to gender issues, and her work carries strong feminist messages. Still, she says that opening up about the attack has been a lot to deal with, personally. But she was emboldened by the global #MeToo movement and wants to contribute to a larger dialogue — it's her responsibility as both an artist and a feminist, she says.

According to the United States Agency for International Development (USAID), in Haiti, 1 in 3 women between the ages of 15 and 49 has experienced gender-based violence. On paper, the country’s constitution establishes gender equality and guarantees political participation. Haitian laws protect women from workplace discrimination and physical and sexual abuse. In practice, however, women there often face exclusion and harassment. Very few women hold public office, and there is only one woman in Haiti's Parliament — up from none just a year ago. “When we saw on Twitter #MeToo, heads falling everywhere [so to speak], harassers, rapists, 'pigs' that were finally unmasked, we were super happy,” she told PRI, in Port-au-Prince, speaking for herself and some of her female friends. “#MeToo did a lot of noise over there [in the US, initially], and it’s great. But here, it is still tough to give the name of the pig [or an abuser] because we aren’t safe. There isn’t a justice system that protects us.”

In the video, Bien-Aimé mustered the courage to share about two incidents, including the rape and also how a few years ago, a friend tried to forcibly kiss her. Until then, “Only two people knew [about the attacks on me]. My boyfriend and my best friend,” Bien-Aimé said. “I felt suddenly dirty, and I thought that people were going to judge me. I had kept this for myself because I was very much ashamed.” But she drew strength from the responses she got to her testimony. "I am feeling better because there are a lot of women that have written me on Facebook. To say, ‘Gaelle, I want to talk about it.’" And it shows how "violence is not exclusive. The economic situation of a woman can vary from a social class to another but the condition of women is the same one."

The video spread on social media, and it led to the hashtag, #PaFèSilans ("Do not shut up" in Creole), as Bien-Aimé and others sought to get more people to speak out on against their abusers.  In many ways, #PaFèSilans builds on a feminist conscience that had been building for decades in Haiti. Since the fall of the Jean-Claude Duvalier dictatorship in 1986, feminist organizations throughout the country have worked to collect data and raise awareness on sexual violence against women under military regimes — and also later on in the 2000s.

Following the 2010 earthquake that devastated the country, protecting women from sexual assault was one of the top priorities of several international organizations working in the relief effort. International nongovernmental organizations themselves were criticized for abusing women — most notably Oxfam earlier this year.  “Public opinion in Haiti is sensitive to the issue of violence against women,” said Denyse Côté, a professor at the Université du Québec en Outaouais (UQO) and the director of the Observatory on regional development and gender-based analysis (ORÉGAND) who has done extensive fieldwork in Haiti on gender issues since the 1980s.

What may have changed this time, with #MeToo and #PaFèSilans, she says, is that feminist messages are now more accepted outside the usual circles.  “The pressure has been continuous and has intensified,” she added. “It is interesting that a woman from a theater background is speaking on these issues; it can help spread more the word.” Bien-Aimé, the daughter of a filmmaker and a medical lab worker, lives in Port-au-Prince with her boyfriend of 10 years. Despite the increased awareness of women’s issues, there is still strong cultural pressure to get married and have children. It's a pressure she is resisting as she doesn’t plan to get married and isn’t sure if she wants children because of the uncertainty of what life may offer them. She has dedicated her life to combining her strong passion for theater with inspiring women around her.

Bien-Aimé, at the opening of a drama school in the capital in early February, says that theater allowed her to feel beautiful when she was an overweight teenager and eventually revealed her feminism without her even trying. “People told me I was a 'feminist,'” she said about a play she wrote and performed in 2011. “I went on Google to find out what it meant, and I read books and I realized that it was pretty cool.” Since then, she has performed routinely, and she regularly speaks out against sexism and other women's issues, like abortion — still illegal in Haiti. Next, she plans to tackle gay rights. The idea is to bring the conversation onto the stage in an entertaining way. She shakes people’s beliefs and shatters taboos while making her audiences laugh during her shows usually performed mostly in Haitian Creole with some French.

She is a part of Nègès Mawon, a collective of women that will hold its third annual feminist festival in Port-au-Prince this summer. Her friend since primary school, Pascale Solages, 30, a journalist and feminist currently working for the Haitian women’s rights minister, says that #PaFèSilans was just one of many steps towards achieving gender equality. “We are using art to amplify feminist voices,” Solages said. “Haitian history is still told through its masculine figures. People know Dessalines, know Toussaint Louverture but nobody knows about the amazing female figures behind these men.” (Jean-Jacques Dessalines and Toussaint Louverture are revered in Haiti for their roles in the Haitian Revolution.)

Bien-Aimé plans to remain a forceful presence in Haiti. For International Women’s Day, she received many invitations to speak about women’s rights. Her message to younger women is to essentially never question their role in an assault but to boldly fight back. “If something happened to me today, I would say it right away and say the name of the attacker. But I used to be ashamed,” she said. "It is time for shame to change sides once and for all.”

This story was produced in association with Round Earth Media. Michel Joseph contributed to the report.