Multinational Investigation Widens into Haiti Assassination, Including Who Bankrolled It 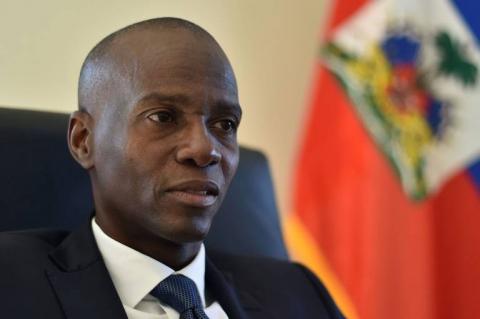 The multinational probe into the brazen, middle-of-the-night assassination of Haitian President Jovenel Moïse broadened Tuesday, with law enforcement in Haiti and South Florida searching for those who provided logistics and arms for the deadly assault — and who bankrolled it. Sources familiar with the probe say that at least nine or 10 arrest warrants could soon be issued by Haiti’s national police in the coming days as investigators continue to question 21 individuals in custody, including 18 Colombians and three U.S. citizens of Haitian descent. Police have said that five Colombians accused of killing the president remain at large.

On Tuesday, police published wanted posters for three Haitian nationals. They include an ex-Haitian senator, Jean Joel Joseph; a longtime government functionary once assigned to the anti-corruption unit, Joseph Felix Badio, and a convicted drug trafficker with South Florida ties and a reputation as a money man, Rodolphe Jaar. Jaar was sentenced in 2014 to 51 months in prison after pleading guilty in a U.S. courtroom to conspiring to distribute more than five kilos (11.02 pounds) of cocaine knowing the drugs were being imported into the United States. Jaar cooperated with U.S. prosecutors and the DEA in another Miami case against a Haitian police commander who accepted bribes for protecting drug shipments. With a recommendation from prosecutors, Jaar’s sentence was then reduced to 45 months.

Jaar is the second suspect who had formerly assisted the DEA and has now been snagged in the Moïse assassination. Joseph G. Vincent, 55, a West Palm Beach resident who had worked as a paid confidential informant for the DEA, was arrested after surrendering. Vincent and another South Florida resident arrested in Haiti, James Solages, 35, whose last address was in Tamarac, say they were hired as translators for a group of Colombian security contractors, and their mission wasn’t to kill the president but to arrest him and install a new leader.

Haitian investigators allege that the would-be president is Christian Emmanuel Sanon, 62, a Haitian doctor with ties to Florida dating back more than 20 years. Haitian police say it was Sanon who contracted with a Miami-area firm, CTU Security, owned by a Venezuelan emigre known in Doral, to provide the group of Colombian security men and Haitian translators. After one of the suspects was arrested, his first call was to Sanon, Interim Haitian National Police Chief Léon Charles said. Sanon then “made contact with two other people who are implicated. They know who they are, and are recognized as intellectual authors of the assassination of President Jovenel Moïse,” Charles said Sunday.

Haitian authorities are now assisted in their search by agents with the Federal Bureau of Investigation and Homeland Security Investigations, both of whom are knocking on South Florida doors to broaden the sweep beyond the group of 21 alleged plot members in custody in Port-au-Prince. U.S. law enforcement agents are searching for a money trail that may have funded what one high-ranking Haitian official has described as a “multimillion-dollar” operation. On the face of it, neither Sanon nor CTU Security President Antonio Intriago, who has disappeared from public view, has the financial standing for such an operation. Public records show both men with a history of debt problems.

Agents are not just looking into who tortured and murdered the Haitian president in his bedroom in the overnight hours of July 7, they are also looking at who played a role behind the scenes. That includes who provided the high-caliber weapons, the vehicles used in the early morning assault and even assisted in the logistics needed to conduct a deadly assault. Moïse was shot inside the bedroom of his private residence in the hills above Petion-Ville, a week ago Wednesday. His wife Martine was wounded but survived the attack, and was flown to South Florida, where she has undergone surgery. No one in the president’s security entourage, which consisted of 23 guards, was killed or apparently even shot, a justice of the peace told the Miami Herald.

Haitian authorities said Tuesday they expect to issue several arrest warrants in the coming days, including for three individuals whose faces are now on wanted posters put up online and on Haitian media outlets. They are wanted for assassination, attempted assassination and armed robbery, the fliers say. One of the three posters was for Jaar, the convicted drug trafficker who has a brother living in south Miami-Dade County. Jaar is described by authorities as a money man with both financial and political connections. Another poster is for Badio, who worked for the Anti-Corruption Unit (ULCC) as the Field Operations Coordinator of the General Intelligence Service and Grievances before he was dismissed on May 17, 2021, according to a note issued by the agency. On his Linkedin profile, Badio also claimed that he worked for the General Inspectorate of the Haiti National Police. Joseph is a former senator from the West region, which encompasses metropolitan Port-au-Prince, who appeared on the political scene in 2004 and was elected under the same party banner, the Inite platform, as the late president René Préval.  All three men, according to a source who has debriefed some of the suspects in custody, are accused of providing arms and money; Badio is also accused of providing vehicles, according to the source.

Part of the investigation is being carried out in Colombia, where the question remains how ex-soldiers ended up in Haiti, who got them there, why and how. Eighteen Colombians are in custody, three are dead and five were still sought in Haiti as of Tuesday evening. Colombia’s vice minister of foreign affairs, Francisco Echeverri, met in Bogota on Monday with Jean Mary Exil, Haiti’s ambassador to Colombia. Echeverri made an urgent plea that consular access to detained Colombians be granted immediately, and asked Haitian officials to preserve and return the bodies of the three Colombians killed in a firefight with police.

Interviewed by Colombia’s W Radio, Exil said the truth will come out gradually about who really was behind the assassination. “This was something well planned, so what the Haitian state wants is to grab all the persons who have interests in the assassination to learn the truth,” he said.

Investigative reporter Kevin G. Hall shared the 2017 Pulitzer Prize for the Panama Papers. He was a 2010 Pulitzer finalist for reporting on the U.S. financial crisis and won the 2004 Sigma Delta Chi for best foreign correspondence for his series on modern-day slavery in Brazil. He is past president of the Society for Advancing Business Editing and Writing.