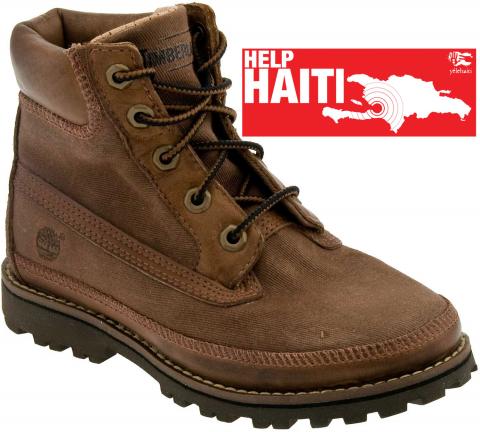 In 2010, just prior to the 7.0 magnitude earthquake that hit Haiti, American shoe and apparel company Timberland announced it would plant 5m trees on the widely deforested and impoverished island. After the earthquake hit, Timberland’s then CEO, Jeff Swartz, visited the country and was faced with two options: pivot to support the massive earthquake recovery, or keep the focus on planting trees.  The company considered its goal to improve the lives of family farmers who lacked the necessary tools, farming techniques and marketing and sales expertise to grow their businesses. Timberland decided to stick with the trees, and spent $1m to help local farmers turn barren land into orchards and forests. Timberland wrapped up the enterprise last year and funded a 45-minute documentary film, Kombit: The Cooperative, to chronicle its project. The film, which provides a glimpse into the challenges and success of the program, is now screening across the country.

Timberland’s reforestation project reflects the pressure on apparel companies to show they run an ethical business. The $2.5 tn fashion industry has been heavily criticized over the years for causing a wide range of social and environmental problems, from using slave labor and toxic chemicals to buying raw materials that require an abundance of water and energy. Companies like Nike, Adidas and Patagonia have all weathered controversies and changed, in some part, where and what they buy to make their merchandise. Some critics contend that the industry remains far from sustainable.  While Timberland’s tree-planting project doesn’t directly benefit the business, its helped pave the way for newer initiatives that the New Hampshire company hopes will create new sources of raw materials and improve its bottom line. For example, Timberland has kicked off a feasibility study for the reintroduction of cotton crops in Haiti. Timberland, whose parent company VF Corporation buys 1% of the world’s global cotton supply for its brands – which include The North Face and 7 For All Mankind – hopes Haiti can become a reliable supplier of organic cotton, according to Margaret Morey-Reuner, director of strategic partnerships at Timberland.

Haiti presents a great challenge for organizations that want to help improve the lives of its more than 10 million people. The country has lost as much as 98% of its forests, due in large part to Haitians’ reliance on charcoal for fuel. In addition, 3.6 million people often don’t have enough to eat. With a 2014 GDP per capita of $846, the World Bank has tagged Haiti as one of the poorest countries in the world. More than a third of Haitians make a living from agriculture, according to the UN’s Food and Agriculture Organization. Yet the country is entering its third year of drought, causing declining harvests.  The reforestation project in Haiti wouldn’t be Timberland’s first. Back to 2001, it began a tree-planting program in China’s Inner Mongolia. In partnership with Green Network, a Japanese nonprofit, Timberland has planted 2m trees in the region’s Horqin Desert to date. With Haiti, Timberland believed it could accomplish something similar closer to home.  “In re-establishing an agroforestry model, trees play a big role in the restoration of Haiti’s biodiversity,” says Morey-Reuner. “The idea is that it would be productive for the land, and farmers aren’t relying on one crop.”  Timberland ran into trouble early on in the Haiti project, when it was revealed one of its partnering charities, Yele Haiti, was mismanaging funds. The charity, founded by the singer Wycled Jean, split from Timberland and eventually shut down in 2012. Morey-Reuner says Timberland kept track of its Haiti program’s spending, and the controversy didn’t involve the company’s money.

Timberland later joined forces with a farmers’ cooperative called Smallholder Farmers’ Alliance (SFA), co-founded by Timote Georges and Hugh Locke, who also co-founded Yele Haiti, though he said he wasn’t responsible for the fund mismanagement. SFA, which also receives funding from the Clinton Foundation, provides small, mostly family-run farms with the tools and training to help them boost their production and incomes. With Timberland’s investment, SFA said it has created 19 tree nurseries and grown its membership to 3,200 farmers (46% are women). Crop yields for members increased by an estimated 40%, while household incomes jumped roughly 50%. The 5m trees planted include a variety of fruit trees, such as Haitian cherry, papaya, lime and orange. Some farmers are cultivating trees, such as Cedrela and Flanbwayan, for timber. “Their income goes up because they’re getting higher yields from better seeds,” says Locke. Timberland has enlisted Impact Farming, a US nonprofit, to carry out a feasibility study that will look for ways to farm cotton sustainably in Haiti.  As the drought continues, Locke and Georges have been encouraging farmers to plant more drought-tolerant plants, such as Moringa trees, whose leaves, fruit and seeds can be processed into food, hair care and other products. Locke and Georges say they are also focusing on building an international market for their farmers’ crops.

Meanwhile, Timberland is exploring the idea of buying organic cotton from Haiti. Timberland has enlisted Impact Farming, a US nonprofit founded by Locke, to carry out a feasibility study that will look for ways to farm cotton sustainably. The complexities of growing cotton are well known. It typically requires a great deal of water, along with pesticides and fertilizers. The company expects the study’s report to be completed this summer. Once the crop is planted, it would take six to eight months before the cotton is ready for harvest and shipment. “These things take time and a lot of things come up. We’re realistic. It’s not that we’re not in a hurry, but we want to be thoughtful and responsible,” says Morey-Reuner. Richard Holland, director of the World Wildlife Fund’s Market Transformation Initiative, said the key is to teach farmers how to produce good yields while using less water and chemicals, and ensure there is no child labor within the supply chain – a practice employed by cotton farming in the past. Holland suggests that Timberland look at the practices and lessons learned by other companies that have earned kudos for increasing their use of sustainable cotton, such as Ikea, H&M and Dutch fashion chain C&A. Those three companies, along with World Wildlife Fund, are part of the Better Cotton Initiative, a nonprofit that sets sustainable farming practices and runs farmer training programs in major producing countries such as China and India.  Timberland and VF also would need to ensure they follow up to make sure their suppliers buy the cotton from Haiti. Otherwise, farmers in Haiti could be stuck with crops they can’t sell because the country isn’t a well known source for cotton. “Haiti is really off the map – buyers won’t go looking for it,” Holland says.