ELMA Matches Contributions to MSF for Maternal and Child Health 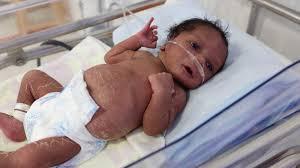 In the west’s poorest country, a Médecins Sans Frontières clinic is the difference between life and death for many mothers and their newborns.  In Haiti, life is a struggle that begins before birth. Even though the baby in the photo above has severe respiratory problems and needs round-the-clock care, he is one of the lucky ones. He was born in a sophisticated hospital dedicated to obstetrical emergencies run by Médecins Sans Frontières, the international aid agency that is the FT’s Seasonal Appeal partner.
The clinic in Port-au-Prince may look basic by Western standards, but it represents the difference between life and death for many mothers and babies in the poorest country in the western hemisphere. The rate of death in childbirth in Haiti is 25 times higher than in the US and neonatal mortality rates are 10 times higher – the worst levels in the region. “We have a lot of hospitals in Haiti, a lot, but they don’t work 24 hours,” says Rodnie Senat-Delva, medical director of the MSF clinic. “A woman can arrive and find no doctors, no care. Here we’re proud that a woman can find everything she needs … We save lives every day.”

Caenne Jeudi was well past her due date, expecting twins and suffering from hypertension when she arrived at the MSF hospital after being turned away from at least four other clinics. She had her eldest son, who is now 14, at the public general hospital and vowed “never again”. It is easy to see why. The public hospital should be a beacon of medical care. But, despite the shower curtains emblazoned with beaches and palm trees that cordon off the delivery cubicles, giving birth there is no paradise.
Patients have to buy their own medicines and even bring their own sheets to put on the stained hospital mattresses. Oxygen tanks stand empty. Cardboard boxes for syringe disposal are overflowing. There is blood on the floor and the toilets reek. The neglect is evident in a country that spends just 4.5 per cent of its $2bn national budget on healthcare, or roughly 1 per cent of GDP. Doctors complain they have no soap to scrub up; that they sometimes have to operate by the light of their mobile phones because of power cuts; that their ultrasound machine is broken.

“Once a patient arrives, we have to tell them the situation – we have nothing, and that they have to expect anything,” said one doctor, who has nine years of training but earns just $115 a month – when he gets paid at all. Doctors staged a five-month strike at the hospital earlier this year for better conditions, but little has changed since they went back to work. “The last cheque I had was in March,” says the doctor, who declined to give his name. It is no wonder then that the MSF clinic – which doubled its 2016 budget to ‎€12m after a superbug outbreak – is in such demand. It ensures drugs and equipment are on hand, that quality treatment is free, and that mothers get three meals a day, one of them hot. Haitian women have five to seven children each, on average. The MSF hospital, marked by a small sign on a busy road in Port-au-Prince that hums with cars and motorbikes, can carry out as many as 30 deliveries a day, often including 15 Caesarian sections. It is peak season now, roughly nine months after carnival. An auxilliary nurse helps Leyla Etienne to feed her baby  “The fact that we receive a lot of cases means we have more chance to practise techniques than in other places, like the [vacuum assisted] ventouse method,” says Esther Jeanty, a 30-year-old midwife contracted from August to the end of January to help with the seasonal rush. She earns twice as much here as in the public health service.

As heartbreaking as staff say it is to turn expectant mothers away, the clinic specialises in high-risk cases only – and there is no shortage of those. Patients stagger in, sometimes doubled over with life-threatening conditions like pre-eclampsia, and are speedily triaged. It’s action stations … An ambulance draws up and a woman, apparently unconscious, is stretchered out. Doctors and nurses set to work immediately, cutting open her dress, monitoring her baby by ultrasound, inserting a catheter and swiftly moving a bin into position as she begins to vomit. She has eclampsia — one of the main causes of admission to the MSF hospital and one of the reasons the Caesarian rate can be as high as 35 per cent of births here. José Naama Jean, 25, (below) was one such case. “I remember brushing my teeth and when I woke up I was in hospital and they were trying to stabilise me. I don’t know how I got here,” she says. ‘I remember brushing my teeth and when I woke up I was in hospital” She cradles her son on her chest in the “kangaroo ward”, where some of the tiniest babies snuggle skin-to-skin with their mothers, who drip milk into their mouths with a syringe. These babies – many of them, according to Haitian tradition, not named until they are certain to survive – are all expected to pull through. The skin-on-skin contact for babies as tiny as Louisise Orimane’s skeletal 860g son keeps them warm and helps them thrive.  ‘I thought he could die, he was so little – he was only 1.03kg when he was born. He was really sick’ “This is something we try to promote a lot – we’re an underdeveloped country and the kangaroo method is very low cost,” says Dr Senat-Delva. “We could use it in other hospitals which don’t have the structures for sophisticated neonatal units. With just one incubator and the kangaroo method, many lives could be saved.”

Caenne is whimpering “Jesus, Jesus”. She delivers the first of her twin boys, who weighs in at a lively 3.58kg. But the second, born breech, is having trouble breathing and is whisked to neonatal intensive care. It is the biggest such unit in the country – a far cry from the tiny, cramped room for neonatal emergencies in the public hospital. There, one baby was turned away bleating pitifully and bleeding from the mouth as he lay in his father’s arms, because no space was available. “Sometimes it takes us 15, 20, even 30 minutes to revive a baby and we manage to save it,” says Evens Estiverne, a neonatal ICU supervisor at the MSF hospital. “Seeing that baby leave the ICU is a joy for us.”  Not all stories have happy endings and some teenaged mothers seem hopelessly unprepared. Leyla Etienne, 16, is struggling to breastfeed her newborn boy, conceived after she missed her contraception injection by just one day. This is already her second child – her first, two years ago, was stillborn at five months after she suffered from eclampsia. But all’s well that ends well for José Naama, who also lost her first child to a heart attack aged less than three weeks. “It’s such a pleasure to feel his little body pressed to mine,” she says. For Dr Senat-Delva, the satisfaction is huge. “We all know that pregnancy isn’t an illness so women ought not to die giving birth,” she says. “Every time a woman arrives here in a terrible condition and leaves with a smile, we’re happy.”