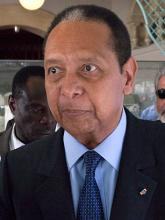 During their years in power, the Duvaliers led a kleptocracy - stealing from the people to maintain extravagant lifestyles.  They did not do so alone.  Being anti-communist, they were long supported by the United States while Swiss banks hid millions of dollars from the Duvaliers and those close to them.  In 2002, Duvalier funds in Geneva, Vaud and Zurich were frozen.  In 2009, the Federal Office of Justice announced the money would be returned to Haiti although this was overturned the following year.  These funds, which belong to the Haitian people, have yet to be returned.   Doing so is long overdue.