Haitians are Being Held Hostage by a Surge in Kidnappings 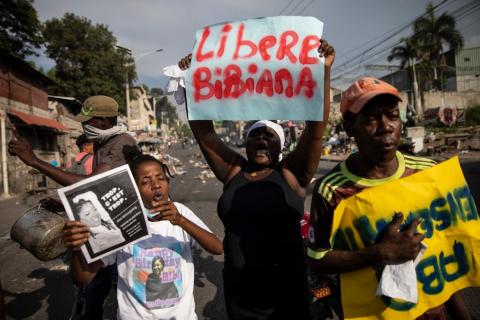 Abductions by the busload: Haitians are being held hostage by a surge in kidnappings

PORT-AU-PRINCE, Haiti — Four days after the August earthquake that devastated the south of Haiti, Walkens Alexandre, a physician, was traveling to treat victims at a hospital when a motorcycle blocked his white Ford Ranger. Two men hopped off, pulled guns, commandeered his truck and hauled him to the outskirts of the capital. He was held for three days while the kidnappers negotiated by phone with his family. He’d be set free for 30 times his monthly salary. Loved ones pleaded with relatives and friends to contribute to the ransom. “Now I’m traumatized, fearful of people, and reminded of this every time someone slams a door, or I hear a motorcycle,” said Alexandre, 43. “We don’t feel safe in Haiti. There is always panic, always fear.” The most troubled nation in the hemisphere is now being held hostage by a surge in kidnappings.

With victims spanning all social classes and ransoms ranging from as little as $100 to six figures, Haiti now holds the tragic title of highest per capita kidnapping rate on Earth. Recorded kidnappings so far this year have spiked sixfold over the same period last year, as criminals nab doctors on their way to work, preachers delivering sermons, entire busloads of people in transit — even police on patrol. So great is the surge that this year, Port-au-Prince is posting more kidnappings in absolute terms than vastly larger Bogotá, Mexico City and São Paulo combined, according to the consulting firm Control Risks.

Saddled with endemic poverty and violence, Haiti is no stranger to kidnapping waves. The country suffered a brutal surge from 2005 until the 2010 earthquake, which killed more than 220,000 people but had the effect of moderating kidnappings. Numbers have climbed steadily in recent years as violent gangs, unchecked by the government, have seized control over key portions of the country.  Analysts call the current wave by far the worst in Haiti’s history. During the first six months of the year, there were at least 395 kidnappings, more than four times the 88 during the same period last year, according to the Center for Analysis and Research in Human Rights in Port-au-Prince. After the assassination in July of President Jovenel Moïse — who was accused of being in league with the very gang members who use kidnappings as a source of revenue and control — abductions dropped briefly, before surging to 73 in August and to 117 in September, according to the center.

Analysts blame the increase on growing desperation, an increasingly compromised police force and a general rise in gang activity amid a political vacuum. Haitian gangs are believed to be linked to influential politicians and business executives; some analysts suggest the kidnapping blitz could reflect upended deals and shifting alliances in the aftermath of Moïse’s death. The kidnapping and the insecurity we are living today is unprecedented in the history of this country,” said Samuel Emieux Jean, founder of the consulting firm HaForS. Haiti is confronting a convergence of crises: political instability, a collapse of the rule of law, the spread of violent gangs, shortages of food and fuel, and massive need in the earthquake-hit south. But the surge in abductions for ransom is rapidly emerging as the clearest sign of its descent into anarchy.

The recent wave includes the kidnappings of two senior bank executives, raids of evangelical churches, the nabbing of nearly 20 doctors and the seizures of fuel trucks and their drivers. A police officer was kidnapped this week in Cap-Haïtien, the nation’s second-largest city. He was only the latest of several officers abducted for ransom in recent months. In Port-au-Prince, kidnappers now parade openly down streets, brandishing their AR-15s and other heavy guns. The Haitian National Police are too understaffed and ill-equipped to combat the growing threat. The U.S. Justice Department reported last year that the vast majority of guns recovered in Haiti and submitted for tracing were either manufactured in or imported from the United States.

Locals and foreigners alike are living in fear. The heads of several foreign companies told The Washington Post that the kidnapping wave led them to reassign staffers to remote work in other Caribbean countries, Europe or the United States. Other firms are leaving Haiti altogether. “Every time you leave your door in Port-au-Prince, it’s like a game of Russian roulette,” said one European executive, who spoke on the condition of anonymity to discuss security. “You don’t know if you’ll be kidnapped that day.” Maarten Boute, chairman of cellular phone provider Digicel Haiti, said his firm has resorted to moving staff only in armored cars with drivers trained for kidnapping scenarios. Because of the escalating risk, he said, he abandoned his Port-au-Prince home this year to move into a fortified hotel compound. “Most people who can afford it and have visas have sent their family away, or moved outside the country,” he said. “We are using armed security, armored cars and have patrols that [scout] roads. But we still avoid certain areas, or moving around, as much as we can.”

In April, four people, including a pastor and a well-known pianist, were kidnapped during the middle of a service at the Seventh-day Adventist Gospel Kreyòl Ministry Church in Diquini, in the outskirts of metropolitan Port-au-Prince. The brazen raid was streamed live on social media, launching a new modus operandi: targeting Christian worshipers during church hours. In September, a preacher was killed and his wife kidnapped in front of a church in Port-au-Prince. On Sunday, kidnappers wearing Haitian National Police uniforms snatched a pastor and two worshipers from a church in the troubled Delmas 29 neighborhood. “We cannot leave the door open to criminals who, for too long, have been damaging society,” Léon Charles, chief of Haiti’s National Police, told reporters in Port-au-Prince last month.

Many of the thousands of Haitians expelled from Texas in the past month by the United States remain stranded in Port-au-Prince. They have felt particularly vulnerable as word spreads that many have returned to Haiti carrying what’s left of their life savings in cash. “You can’t walk around after 6 p.m.,” said Roody Etienne, 31, who was deported from Texas last month with his wife and child and is temporarily living in a gang-infested part of Cap-Haïtien. “They kidnap everyone.” Mass kidnappings, meanwhile, are becoming more common. In May, armed men boarded a bus in Port-au-Prince and abducted more than a dozen passengers. In July, a busload of 16 people was kidnapped in the northern city of Gros-Morne. Hijacking buses, and cars with multiple passengers, has become a favored tactic of 400 Mawozo, one of the gangs most responsible for the kidnapping surge.

Some residents of the capital are commuting by boat to avoid gang-infested neighborhoods and roads. Some of the latest targets are fuel trucks and their drivers — so many that it’s affecting supplies at Haitian power plants and gas stations. David Turnier, president of the National Association of Petroleum Product Distributors, said seven fuel trucks were hijacked and their drivers held for ransom during just the first week of October. He said gas stations across the country have witnessed a 60 percent drop in fuel stocks.

Persistent fuel shortages caused by the hijackings are leading to intermittent blackouts. Some neighborhoods and cities go weeks without electricity. Abductions also raise the prices of goods and services such as transportation. “It’s catastrophic,” Turnier said. “Some gas stations refuse to operate in this mess. They just close shop.” Guilaine Pierre, a 50-year-old vendor who sells boiled eggs in the street, said her 25-year-old son was walking outside Port-au-Prince in February when bandits on a motorcycle grabbed him. Shortly after, she received a terrifying phone call. “They demanded 50,000 gourdes” — about $500 — “and told me they would kill him if I didn’t pay,” she said. “I almost died when I heard this. Even today, I feel sick remembering it.”

They held him for two days before releasing him for a reduced ransom equal to $223 — most of her savings. Like many kidnapping victims, her son, an agronomy student, was beaten during his ordeal. He required hospitalization for broken ribs. “We are lost,” she said. “Our only hope for change is God.”

Anthony Faiola is The Washington Post’s South America/Caribbean bureau chief. Since joining the paper in 1994, he has served as bureau chief in Berlin, London, Tokyo, Buenos Aires and New York. He has also covered global economics from Washington.