COVID Urgency in Haiti Has Biden Administration Working on Vaccines 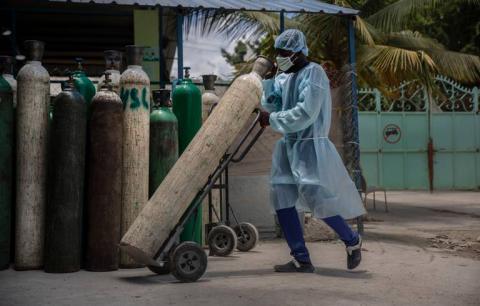 BY JACQUELINE CHARLES AND MICHAEL WILNER

The Biden administration is urgently working to get coronavirus vaccines to Haiti, but is concerned that the country’s weak healthcare infrastructure may not be able to deal with a large shipment, the Miami Herald and the McClatchy Washington Bureau have learned. A White House official said the administration is in “active” conversations with the Haitian government on the complexities of delivering a significant number of U.S. vaccine doses to the country, including Haiti’s storage capacity and the logistics of shipping the vaccines in proper conditions.

But “there is an urgency” within the White House to get doses delivered in short order, the official said. After reporting few COVID-19 cases and fatalities last year and perplexing the medical community, Haiti is seeing a deadly surge in infections. The list of the dead from COVID read like a who’s who of Haitian society, and new cases are stretching hospital capacity and the country’s oxygen supply. Antiviral treatments, readily available in the United States, remain out of reach, and on an almost weekly basis at least one hospital in the metropolitan Port-au-Prince area announces it is full and cannot accept any more patients..

Meanwhile, testing capacity remains low and the country remains the only one in Latin America and the Caribbean where the government has yet to administer a single shot of a COVID-19 vaccine. A shipment of 132,000 AstraZeneca vaccine doses from the U.N.-backed global sharing program, COVAX, was supposed to arrive on Monday, but has been delayed, the Pan American Health Organization said. “As a vital part of our commitment to share at least 80 million safe and effective COVID-19 vaccines, the Biden administration is actively engaging with Haitian government officials on how to get vaccines to Haiti as soon as possible,” the White House official said. “While no plans have been finalized, we hope to share more news on our commitment to Haiti in the immediate future.”

In the face of the surge, those with U.S. visas and means are flying to Miami and New York to get vaccinated. But the majority of Haitians are forced to wait amid fears of a pandemic many did not believe in. Concerned that the U.S. and COVAX are not moving fast enough, some Haitians and healthcare advocates are reaching out to hospitals and elected officials in the U.S. asking if they can get access to their extra vaccines. In particular, they are seeking access to some of the millions of doses of Johnson & Johnson vaccine that are set to expire in various states between now and August.  “We just don’t want Haiti to be the last country to receive” help, said Dr. Yves Renaud, one of the protesters at a rally last week who is hoping the U.S. will donate some of its Pfizer and Moderna overstocks to Haiti.

So far, however, Renaud and others are finding that getting the U.S.-purchased doses flown to Haiti is almost impossible.  All COVID vaccines in the U.S. have been purchased by the U.S. government, and all providers must register with the U.S. Centers for Disease Control and Prevention and abide by the provider requirements, which say they either have to discard the unused vaccine if it’s been out too long, or return it. Any sharing of vaccines outside of the U.S., a State Department official said, must proceed through the federal government.  “They’re not going into anyone’s arms right now and there are so many people so desperate for the vaccine in other parts of the world. To just let them languish on a shelf while people are dying in other countries is just such a huge inequity,” said Michael Kahane, southern region bureau chief for the AIDS Healthcare Foundation, which provides care to people living with HIV in Haiti and elsewhere.

Last week, Kahane and other protesters gathered outside the federal building in Fort Lauderdale calling on the U.S. to share its COVID vaccine with the world. Similar protests were held elsewhere around the U.S. The U.S. “bureaucracy is moving very slow,” he said. “Haiti is literally just miles off of our shores and we all know people travel back and forth to Haiti every day. The fact there are no vaccines available there is not only a huge inequity for the people of Haiti but it’s also a huge barrier to getting the world vaccinated and getting COVID behind us.”

Officially, Haiti has registered 16,662 infections and 358 deaths from COVID-19 as of June 10 in a population of 11.5 million people. In the last two weeks, it has averaged about 124 new infections a day. The numbers are still relatively low compared to the rest of the Caribbean and Latin America, but experts believe that cases are being undercounted. But with less than 300 beds to treat COVID patients, the global pandemic risks collapsing an already fragile health system. “Biden wants to be generous in vaccinating the world and we have expiring vaccines. I don’t know why the dots just don’t connect,” said Dr. Richard Frechette, whose St. Luke Hospital runs one of the few COVID-19 treatment centers in metropolitan Port-au-Prince. “It’s totally absurd from every humane point of view and justice. And it’s absurd in the face of the desire of the White House to be very generous in vaccinating countries of limited resources.”

St. Luke, Frechette said, is struggling under the weight of COVID. Though the hospital has expanded beds, it needs about 800 additional oxygen tanks at $300 each, he estimates. “We have 115 beds, but we cannot use one more bed than what we have oxygen for,” said Frechette, a Catholic priest who is also a doctor. “We have 280 tanks. ... We have to keep sending trucks down with 50, 60 tanks at a time in order to make 280 tanks turn to 400. A tank is empty in four hours.”  Gang violence is hindering oxygen deliveries. On Monday, attacks on businesses in the capital disrupted traffic along the main road to the airport as well as oxygen production for most of the day at a nearby production plant in the Cité Soleil slum. “We are totally going out of our minds with the oxygen and everybody else too because even when the liquid oxygen comes in, the gangs are disturbing the center,” he said.

Last week, the U.S. Agency for International Development announced that as part of a $16.1 million commitment to assist Haiti in the battle against COVID-19, it was providing lab equipment, disease surveillance, hand-washing stations and 50 oxygen concentrators to be distributed to 16 hospitals.  Haitian doctors say while they are grateful for the U.S. donations, the severity of the COVID-19 infections they are seeing are beyond the use of oxygen concentrators and require the use of anywhere between 400 and 500 oxygen tanks a day at some hospitals.

Hospitals also need more treatment options like access to the drug Remdesivir, which helps reduce the number of days patients spend hospitalized but is very expensive. They also need anticoagulants to treat blood clots, the cause of some COVID-19 related deaths, and Regeneron, the antibody cocktail once touted by former President Donald Trump, which is considered a luxury in Haiti.  “It’s really bad,” said Dr. Joseph Durandis, a front-line COVID-19 physician in Miami who has been giving advice on treatment protocols to doctors in Haiti. “I have patients here telling me, ‘Hey, I lost four people ... because of COVID.’ Those cases don’t make it to the hospital, some of them they don’t even get diagnosed. There’s a lot of underreporting.”

Durandis, who works with the Miami-based Center for Haitian Studies health clinic and serves as program director for the Borinquen Family Residency Program, said Haiti is facing a number of challenges in its treatment of the pandemic. First there is the lack of physical infrastructure like beds, which weren’t much to begin with but were slashed last year after the country saw low hospitalization rates. The second is the doctors. “Many have no clue when it comes to managing COVID. Some of them are asking me, ‘Should we use hydroxychloroquine?’ It has been debunked [as a treatment] since last year,” Durandis said. “There’s a lack of knowledge; kind of the same thing that we faced last year here. Most people didn’t know how to react. ... Now on top of it, there’s misinformation.  “There are doctors, telling people, ‘Don’t take that vaccine; they are using you as guinea pigs, vaccines are ineffective,’ ” Durandis said, noting that he was aghast after watching a clip during a popular Port-au-Prince morning show of a woman providing misinformation about vaccines. “There’s a lot of misinformation about COVID that makes it difficult for everybody.”

Another challenge in Haiti’s battle, Durandis said, is the lack of leadership. There are no daily briefings about the pandemic and most Haitians in the capital don’t know all of the hospitals that will treat the disease. “You’re on your own,” he said. “Frankly, you don’t see anybody talking about COVID in Haiti and that’s unfortunate, especially if you’re going to need to vaccinate people. You’re going to need to motivate the people so that they know the information. If you don’t have people doing that, the conspiracy theorists are going to win that game.”  The possibility of Haiti having thousands of doses of unused vaccines because of vaccine hesitancy and distrust of the government is not lost on those trying to help. A number of partners working in Haiti have been in talks with both the Pan American Health Organization and the Biden administration about the vaccine rollout plan, and ensuring that the vaccines get into arms once they arrive.

Though vaccination and all aspects of the upcoming campaign will be led by Haiti’s Ministry of Public Health and Population, PAHO said it is currently providing support to the government in preparing the logistical aspects of the rollout. “Activities are already being organized to target healthcare professionals, civil society organizations and local media, and a risk communication plan to address vaccine hesitancy among the Haitian population is also being finalized,” said Ashley Baldwin, a spokesperson with PAHO. To prepare the plan, Baldwin said, two surveys are being conducted — the first has provided some insights on perceptions of the vaccine among Haitian health professionals. The second study, initiated by the Haitian government and conducted by Notre Dame University of Haiti with support from UNICEF, aims to improve understanding of the vaccine among the general population. The data, she said, while still only very preliminary, have provided some useful insights.