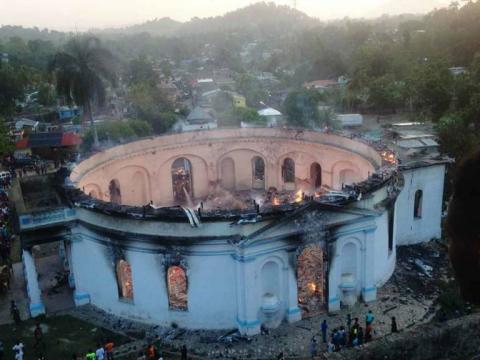 Built after the Haitian Revolution in 1809, according to its priest, Our Lady of the Immaculate Conception Church in Milot sits among three iconic structures inside the National Historic Park in northern Haiti outside the city of Cap-Haïtien. The park encompasses the Palace of Sans-Souci, which the Roman Catholic church is a part of; the fortified site of Ramiers; and the Citadelle Henri, the mountaintop fortress outfitted with hundreds of cannons. Symbolizing Haitian freedom, the monuments were built by King Henri Christophe, the self-proclaimed ruler of Haiti who governed over a divided nation following the death of founding father and revolutionary hero Jean-Jacques Dessalines. Twelve years after slaves launched a revolt against their French colonial masters in the northern hills of Haiti on Aug. 22, 1791, Dessalines declared the country free from French rule on Jan. 1, 1804.

His death on Oct. 17, 1806, however, led to a divided country. On Feb. 17, 1807, Christophe, Dessalines’ war general, became president of the State of Haiti, as he named the northern region. Alexandre Pétion, another war hero, ruled the South. In the north, Christophe sought to fortify the country’s newfound freedom through military engineering designed to protect the new nation from future French attacks. While Ramiers was to serve as bunkers, Sans-Souci was his residence and the administrative center of power after he declared himself king in 1811. Predating the city of Milot, it was effectively the capital of Christophe’s northern kingdom, and the unusual church, with a circular body and dome roof, was his.

Following the Haiti earthquake of 1842 that destroyed much of the north, the church was the only element within Sans-Souci to be rebuilt, getting a new roof almost a century later. “This church is the pride of Milot. It’s the pride of the North. It’s the pride of Haiti,” said parish priest, Father Alain Prophète. “I am in shock.” Prophète and another priest, Father Delince Exalus, who spoke to the Miami Herald, said an investigation is under way to determine the cause of the fire, which started at the back of the structure. Both said it took ill-equipped firefighters an hour to arrive from neighboring Cap-Haïtien, which at most should not have taken more than 30 minutes at that time of the day. "They didn’t arrive until 3 a.m. and by then all of the roof had already burned,” Exalus said.

Prophète said he learned about the fire when he was awakened from his sleep shortly before 2 a.m. Monday. When he arrived in front of the church’s blue and white building, he saw the blaze and the population of Milot desperately trying to put it out. “They fought, and fought; some were even injured,” Prophète said. “In the moment we are speaking, we do not have a church. ... Only the walls are standing.”

In an open letter to the Haitian government, members of the business community and historical preservationists in the north called on the government to prioritize historical sites. They noted that over the weekend, the Citadelle was also vandalized. They denounced the fact that in the very year of the 200th anniversary of the death of Christophe in 1820, the monuments he built are being quasi-abandoned. “What explains why the Palace of Sans-Souci cannot have police officers 24-7 to ensure the security of the premises,” the letter stated. “Stop this denial of our history as a people! Only these monuments remain testimonies of our history of struggles, suffering and hope.”

Patrick Delatour, a former Haiti tourism minister and architect who has been studying the church since the 1970s, said he and a team plan to inspect the structure later this week to see what’s salvageable. Following the collapse of the roof during Haiti’s 1842 earthquake, it was rebuilt by President Sténio Vincent following the end of the 19-year U.S. occupation of Haiti in 1934. “Immediately after the American occupation, there was a whole program under President Vincent for rebuilding the historical memory of the Haitian people,” Delatour said. “So there was a whole program of restoration for the Citadelle, the Palace of San Souci ... and in that framework the chapel was rebuilt by Haitian engineers using American studies.”

Recently the roof was repaired again, said Prophète, describing that when it rained during Mass, water not only seeped in but one could “look up and see the sky.” He hopes that the church, which is also a tourist attraction for the town, isn’t completely lost. Delatour, who recently was part of the group involved in selecting the next designers of the National Palace, which was destroyed in the 2010 earthquake, noted that this year is not only the bicentennial of Christophe’s death, but the 350th anniversary of the creation of the city of Cap-Haïtien. “This is a disaster,” Delatour said of the fire. “But it’s also an opportunity for the Haitian government to take the leadership in the reconstruction of the country by the process of rebuilding two major symbols of Haitian identity: the chapel of Sans-Souci and the National Palace.”

Our Heritage is Abandoned: Burning of Haitian Church Fuels Anger

Cultural leaders in Haiti have described the gutting by fire of a celebrated 200-year-old church as an avoidable tragedy that highlights the fragility of the Caribbean nation’s patrimony – and the need to preserve its historical treasures. The Our Lady of the Immaculate Conception church in the town of Milot is part of a Unesco world heritage site that includes the ruins of the Sans Souci palace and the Citadelle Laferrière, an imposing fort that looms over Haiti’s northern plains.

Fire tore through the church on Monday, causing its distinctive black wooden dome to collapse. The cause of the blaze has not been determined, but some saw it as indicative of the malaise of misrule that has long bedeviled the island – some of it locally rooted, and some imported by more powerful neighbors.

“[For years] we have been asking the state to ensure the protection of these colonial dwellings, which are important as monuments of slavery, yet nothing has been done,” said Laënnec Hurbon, a sociologist with the State University of Haiti. “But the state spends its time buying luxurious cars for ministers, functionaries and parliamentarians. It is therefore not surprising that everything concerning the national heritage is abandoned.”

The church was constructed between 1810 and 1813 by Henri Christophe, one of a cadre of revolutionary leaders including Toussaint Louverture and Jean-Jacques Dessalines who helped Haiti oust the French and end the system of slavery. Christophe went on to declare himself King Henry I and ruled in autocratic splendour over northern Haiti until his death by suicide in 1820 amid a protracted civil war.

On Christophe’s death, the church was ransacked, and its dome had collapsed following an 1842 earthquake. In the 1970s, the renowned Haitian architect Albert Mangonès led an effort to restore the complex. It was named a world heritage site in 1982. Some worry the legacy that the buildings at Milot attest to is being lost amid Haiti’s current political upheaval. “The structural inequalities in our society mean there has never been an education accessible to all that would teach the idea of the common good,” says the Haitian author Yanick Lahens.

Haiti has been shaken by often violent unrest for months, prompted in part by a long multibillion-dollar corruption scandal which has engulfed the administration of President Jovenel Moïse. Despite the political battles, however, the church seems to pierce to the heart of Haiti’s national identity, across party lines. In a letter to the government after the fire, educational and civil society figures called on the nation’s political leaders to “stop this denial of our history as a people [as] only these monuments remain, testimonies of our history of struggles, suffering and hope.”

One former president, Prosper Avril, who ruled the country from 1988 to 1990, has called for a taskforce to protect the country’s cultural heritage. In a land that often seems beset by internecine political vendettas, some hope that even in this dire moment, the church’s reconstruction might serve as a point of unity. “The royal chapel of Milot is a testimony to the history of our people,” said Erol Josué, director of Haiti’s national bureau of ethnology (BNE). “The Haitian state should engage all layers of the population in its reconstruction, because this is our heritage.”