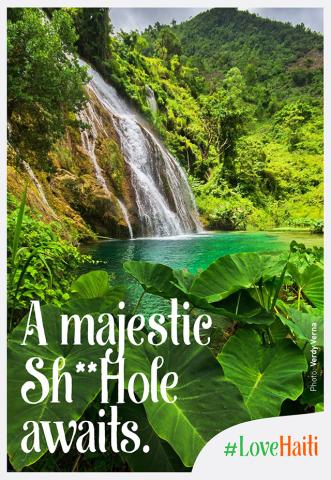 President Trump’s comments referring to certain nations, including Haiti, as “shitholes” provoked widespread anger and outrage. But one agency creative in the Caribbean nation is working on a more lighthearted response—raising money to run out-of-home and print ads in Washington, D.C., that aim to use Trump’s words against him to boost the image of Haiti. Fabien Dodard, a creative director at Parkour Studio, has started a GoFundMe campaign to raise cash to run “shithole” themed ads for Haiti in the American capital. He has set a $40,000 goal, and raised a little over $2,000 so far.

The more money he raises, the more ads he’ll be able to run. The creative has already been produced, with headlines like “A majestic sh**hole awaits,” “You bring the sunscreen. We bring the sh**hole” and “Our sh**hole beaches go on for days.” There is also a letter to Trump that could run in The New York Times.

Here are mockups of how the ads would look:

The campaign is not connected to the government of Haiti or its tourism agency.

While the official fundraising goal is $40,000, Dodard would happily take more. On the GoFundMe page, he offers this breakdown of how the funds would be used at certain levels:

AdFreak spoke with Dodard—a Haitian native who has worked at U.S. agencies Victors & Spoils, CP+B and Colle McVoy—about how the idea for the “Sh**hole” campaign came about, and his hopes for how it will proceed.

AdFreak: How did you feel when you first heard about Trump’s comments about Haiti.

Fabien Dodard: At first it felt like my country and all its citizens were being bullied. Further along, I started to realize the extent of just how damaging this could be for our country from an image/brand perspective, given the fact that this whole thing got so much press. It infuriated me.

How did you come up with the idea of countering those comments with this campaign?
The Haitian community got very active on social media when the news came out, sharing images and their experience of their country. The contrast between the word and the images being posted was quite powerful, and that was the seed of the idea. Now, in terms of making a campaign out of it, that was driven by our willingness to change the narrative around our country.

Do you think Trump is just ignorant about Haiti?  Would running these ads in D.C. help him become less ignorant?
I can’t say if he is ignorant about Haiti. That would be ignorant of me to say, since I don’t know the man personally. I do think he is very reckless with his choice of words.

To what degree is this less about Trump and more about making sure people know the beauty of a place like Haiti?
While this campaign is all about what Trump said, it does address the public at large. We’re using the stage he gave us to showcase the other side of Haiti that has never seen the spotlight. It’s about showing the positives of Haiti, from its culture to its natural beauties, and to rise above the divisive language.  We didn’t want to just make Haiti seem like a great vacation spot. This was bigger than that. We wanted to talk about the culture and people and our pride in both as well. That’s why we have executions that aren’t just about the beaches and waterfalls, but feature our native population in a positive light.

Have you been in touch at all with the Haitian government or tourism agency about this?
We’ve tried to run the campaign idea by them, to no avail. We originally had the Haiti logo on the ads and replaced it with a hashtag.

How quickly did you mock up the ads? Do you have a favorite line?
It took us two days from concept to execution. These are close to final, and in terms of a favorite line, “A majestic sh**hole awaits” is one of my personal favorites. I love the contrast between the words “majestic” and “sh**hole.”

Tell me about the letter to Trump that you hope to run in the Times. What kind of tone did you want for that letter?
Sarcastic and lighthearted. Our people are warm, humble and inviting. And I wanted that letter to reflect that.

You are looking to raise between $15,000 and $500,000. How much do you think you will actually raise? How quickly do you want to get at least one billboard up?

I don’t have a set expectation for this fundraising. I mean, I’d love it if it could reach $500,000. We could do so much with that. I think that with even $2,000 to $3,000 we’ll be able to have at least one billboard up (just not downtown D.C.). In terms of speediness, I’d love to have a billboard up by next week while the topic is hot.

Tim Nudd is creative editor of Adweek and editor of AdFreak, its daily blog. He oversees all of Adweek's creative coverage and is co-host of its weekly podcast, Yeah, That's Probably an Ad.