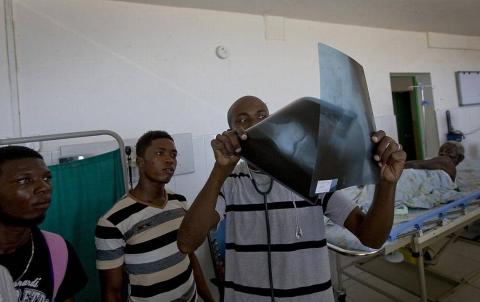 To save lives, Haiti should focus on primary care more than hospitals, report says

When Canada unveiled a new hospital in Haiti’s Artibonite Valley nearly three years ago, its ambassador described the $30 million facility as “Canada`s commitment to improving access to quality maternal, neonatal and child health care.”  But La Providence Hospital in Gonaïves would almost immediately begin to flounder. A little more than a year after its ribbon was cut, the beds lay empty first because gangs made retaining hospital staff members difficult and then due to a countrywide hospital strike.  Today, La Providence is open. But a new World Bank study released Tuesday is questioning the effectiveness and goals of that hospital and a slew of others in Haiti, where the priority, the lead author says, should be on primary and preventive healthcare and not hospitals. The study calls for Haiti’s government and donors to better coordinate health financing. It says the country, which currently devotes less than 5 percent of its budget to health, has to spend more and run a more efficient health system. “We have a lot of hospitals that do not necessarily provide care at the level they are supposed to,” said the study’s lead author, Eleonora Cavagnero, a health economist for Haiti at the World Bank, who also advocates for a moratorium on new hospital construction. “A lot of the things that Haitians suffer from could be treated at the primary health care levels in a more cost-effective way.”

While the study found that Haiti has significantly more hospitals than many countries including Burundi and Tanzania, it spends less on healthcare per capita than its closest neighbors. The Dominican Republic spends $180, Cuba $781 and the Latin American and Caribbean region, $336 dollars. Haiti spends just $13. What that means is that the poorest Haitian mothers are still far less likely to deliver in a health facility, and maternal and infant mortality rates are still four or five times higher many countries in Latin America and the Caribbean. Despite these and other pressing health care needs, Haiti has seen a sharp drop in government health expenditures in the last two decades with a consequent increase in donor-dependency, the report says. “Donor financing is itself decreasing and thus, the government urgently needs to plan for increasing domestic funding for health to avoid a spike in out-of-pocket expenditures,” the report says. It urges the country to remain focused on the poorest people, who frequently bypass the public health system due to lack of trust and cost, relying instead on consultations from traditional healers or medication from unregulated providers. "While Haitians can now expect to live longer, access to basic health services is still lacking," the report says.

Since 2004, public spending on health in Haiti has fallen from 16.6 percent of the country's approximately $2 billion budget to 4.4 percent of the latest $1.8 billion budget submitted by Haitian Prime Minister Jack Guy Lafontant, a physician, and approved this month by Haiti’s Parliament. Most of the healthcare money pays for administrative costs, rather than medical facilities. Only 32 percent of health facilities in Haiti provide essential medicines, and only 31 percent possess basic medical equipment, the report notes. The best run facilities are not government owned, but those operated by non-governmental or charitable organizations, the study found. “For example, 87 percent of the operational budget at the University Hospital of the State of Haiti is allocated towards staff payroll, which is high based on international benchmarks,” the report says. “In public facilities, administrative staff represent nearly half of the workforce, which is also high in comparison to other low-income countries.” Shortly after taking officer earlier this year, Haiti President Jovenel Moïse toured several hospitals in the Port-au-Prince metropolitan area. Moïse reached some of the same conclusions as the World Bank report. "Most of these hospitals attest to a serious human resource problem," Moïse said. Even if equipment is available, it often doesn't have technicians to operate it, and some hospitals "have been completed, but political instability has prevented them from functioning normally."

And while he’s promised to tackle the problems, another promise he made — creating a specialty hospital just for police officers — could exacerbate the situation unless the hospital is part of a network, Cavagnero said. The Haitian government and its development partners like Canada and the United States, she says, “should spend more on primary healthcare by shifting resources away from hospitals.” Haiti’s succession of natural disasters and political instability also have not helped. After last year’s Hurricane Matthew, the post-catastrophe response took the form of construction or rehabilitation of hospitals. This was done, the report says, “without planning for how running costs will be borne after the initial emergency has passed.” It was the same in the aftermath of the country’s 2010 earthquake, when France and the United States agreed to finance an $84.2 million University Hospital of the State of Haiti. The construction of the 534-bed facility is now 18 months behind, projected to be completed in June 2018. The estimated cost to run the hospital — between $12 million and $15 million a year — is far more than Haiti spends in operational costs, minus salaries, on its entire system. That amount, Cavagnero says, is $8 million.

Dr. Ronald LaRoche, who operates a network of private hospitals around the country and is a primary care advocate, said Haiti’s healthcare crisis is going to get “worse when considering the shrinking of international assistance, the lack of income coming from the government side, the inflation rate, the increase of the population and the emergence of new hazards like cholera and Zika, and the reappearance of old ones like tuberculosis.” The solution, he said, is universal health coverage where those who can pay received an insurance card, and those who cannot are covered by the government or donors. “This system will prevent the financing of inefficient healthcare facilities like the general hospital, which is always on strike and lacks the most basic items to save lives although everybody receives a salary every month,” LaRoche said. But the study isn’t optimistic that even a change in the healthcare system such as that could improve health in Haiti where more than half of the population lives on less than $1.90 a day and the unemployment rate is more than 30 percent.

AMONG THE STUDY’S FINDINGS AND RECOMMENDATIONS:

▪ Haiti’s Ministry of Public Health and Population allocates 90 percent of its operating budget to personnel costs, leaving little room for other operational costs. At the strike-prone University Hospital of the State of Haiti, 87 percent of the operational budget is allocated for staff payroll.

▪ The country should set up a licensing policy for hospitals to help determine whether hospitals can be built or expanded.

▪ In public facilities, administrative staff represent nearly half of the workforce, which is also high in comparison to other low-income countries. Decentralization of human resources would make health facilities more accountable, limit absenteeism and raise productivity.

▪ Hospitals managed by non-government organizations (NGOs) are more efficient than public hospitals. Private, for-profit hospitals are the lowest-performing, and they also spend more than facilities managed by the health ministry and NGOs.

▪ Haiti doesn’t tax cigarettes but should consider imposing one, along with raising taxes on alcohol. to raise funding for health.