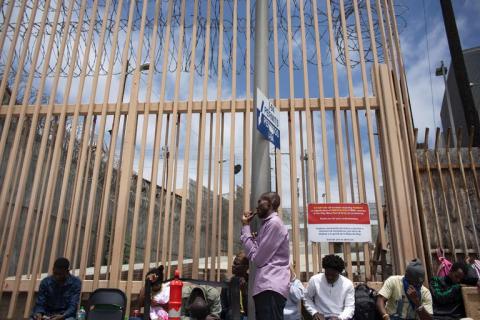 According to NBC San Diego, more than 7,000 Haitian migrants are expected to attempt crossing into Southern California in the coming months.  Immigrant groups and faith organizations in both Mexico and Southern California are doing what they can to assist.  The U.S. Customs and Border Protection (CBP) states that in the last 10 months, over 3,500 Haitians have crossed through ports of entry in San Ysidro, Otay Mesa, Tecate, Calexico East and West and Andrade.  The CBP observes hundreds have gathered at five shelters in Tijuana, waiting to cross at San Ysidro.  Jacqueline Charles of the Miami Herald writes that “In fiscal year 2015, the CBP only apprehended 339 Haitians at the San Ysidro Port of Entry, the world’s busiest border crossing…but that number jumped sharply from Oct. 1, 2015, to Sept. 4, with officials processing more than 5,000 Haitians at the California entry point, overwhelming the facility, which is undergoing construction.”

The U.S Department of Homeland Security (DHS) has issued a warning to Haitian migrants that they will be deported if they attempt to enter the United States.  As of Thursday, September 22nd, any Haitian migrants arriving at the border without visas will be subject to expedited removal proceedings. Most migrants are fleeing the absence of economic opportunities which would mean they do not have valid grounds for refugee status.  However, it is important that migrants be treated humanely and that asylum law continue to apply.  DHS reports that any migrant who feared returning to Haiti because of the threat of persecution or torture will be interviewed to determine whether that fear was credible.  If an immigration officer determined that it was, the immigrant could apply for asylum.  Another complication is the extent to which the Haitian government has the capacity and the political will to receive and assist migrants who are deported.  This is important as deportations require cooperation with the receiving government. Charles notes deportations come at a politically challenging time for Haiti as it prepares to re-do controversial first-round presidential elections on October 9th. Elections in Haiti are rarely without complications.

The full statement by the DHS Secretary can be found here.  Please share your thoughts on this policy change in the comments section below.