UN Calls on Haiti to Settle Differences and Hold Elections 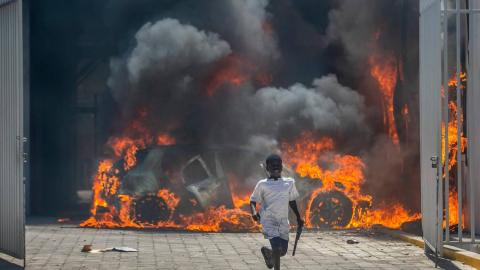 The often divided U.N. Security Council Wednesday issued a unified call for Haitian President Jovenel Moïse to tackle the country’s deepening security and institutional problems while advancing preparations to ensure that free, fair and credible legislative and presidential elections take place this year. All 15 members of the Security Council approved the call to action during a brief virtual hearing, signing off on the first statement to come from the group’s president on Haiti since 2017, in a sign of the group’s mounting concerns for the country after ending its 15-year U.N. peacekeeping mission. “The Security Council expresses its deep concern regarding the protracted political, constitutional, humanitarian, and security crises in Haiti,” noted the statement, which was drafted by the United States, whose ambassador, Linda Thomas-Greenfield, presided over the meeting and is the current council president. The group stressed that it was “the primary responsibility of the government of Haiti to address underlying drivers of instability.”

The unusual statement comes as Haiti is in the throes of a severe political, security and humanitarian crisis, with Moïse facing calls to step down from power, thousands taking to the streets in recent protests, and powerful, armed gangs wreaking havoc on ordinary Haitians who are now fearful of even sending their children to school. Observers say the U.N. statement shows that the U.S., under the Biden administration, is growing more critical of Moïse. For some it also shows that the international community is equating democracy to elections, missing other crucial good governance factors.  In a Feb. 22 meeting on Haiti, diplomats expressed concern about the situation in Haiti, where kidnappings have spiked by 200% and the U.N.-trained Haiti National Police force has taken to the streets in protests in recent days after several officers were killed during a botched raid in a Port-au-Prince gang stronghold.

During that hearing, Moïse, who has been ruling by decree for over a year, took the unusual step of personally addressing the council. He defended his administration and blamed “corrupt oligarchs” and a “radical and violent opposition” for the crisis, telling council members “a policy of chaos has meant that the government has had to take off the gloves.”  U.N. Security Council members spent weeks negotiating over the content of the statement. Some members wanted tougher language on Haiti’s continued failure to rein in armed gangs and hold human rights offenders responsible for a slew of offenses, including the high-profile assassination of the head of the Port-au-Prince Bar Association, as well as several massacres in working-class neighborhoods of the capital.

Other diplomats insisted on underscoring the need to address security, transparency and logistical issues ahead of the upcoming legislative and presidential votes.  In the statement, council members also appealed to politicians and others “to set aside their differences in the interest of the people of Haiti, to engage constructively to enable the organization of upcoming elections and to ensure elections take place in a peaceful environment, and calls on the international community to support Haiti in this endeavor.”  But critics say the push for elections in a country where all of the major institutions are in crisis — the judiciary has been on strike for five weeks and the parliament is practically nonexistent — also shows that the international community lacks a deeper understanding of what is taking place.

The country is facing a systematic collapse, with armed gangs increasingly filling a political and social vacuum, 35 years after the fall of the brutal Duvalier family dictatorship, issues unlikely to be resolved by elections alone. It also risks having armed groups shape who holds power in the country.  Lemète Zéphyr, a university professor and president of the ethics commission for the Protestant Federation, said that while he welcomes the council’s insistence that human rights must be respected and conditions must be created for credible elections, holding a vote is impossible this year.  “They know very well that the Provisional Electoral Council that is here doesn’t have any credibility and all of the sectors in Haitian society have denounced it,” he said. “They also know that, technically speaking, no election is possible in such a short window.”

Haiti was supposed to hold elections for parliament in October 2019. By failing to do so, the legislature stopped functioning, as there weren’t enough senators for a quorum. The terms of all local officials were also declared expired by Moïse, who instead has ruled the country of 11 million by decree. A slew of presidential orders, including one creating a secret intelligence office, has raised concerns both in and out of the country, with detractors accusing Moïse of becoming the region’s latest strongman.  Meanwhile, the end of his five-year presidential term continues to be a matter of dispute. The opposition claims that Moïse’s term ended last month on Feb. 7, while Moïse insists that he still has another year left.

Moïse has said he will hold elections but has pushed back on the United States’ call to hold legislative elections as quickly as technically feasible. Instead, he is planning for a constitutional referendum, now set for June 27, asking Haitians to approve a new magna carta. The government has begun running ads on local radio and put up posters all around the capital urging people to adopt the document, which still has not been finalized and hasn’t been seen by most Haitians.  A U.N.-controlled fund set up to pay for election materials has so far only raised $20 million, all of it from the Haitian government. Some nations are quietly refusing to contribute, either because they do not support the controversial referendum, or because they believe Moïse has not yet ensured the necessary concessions for a fair vote.

Bocchit Edmond, Haiti’s ambassador to the U.S., said he hopes all Haitians heed the Security Council’s call, which stresses the importance of all sides coming together.  “The statement acknowledges that Haitians are the drivers of change, through dialogue and tolerance,” he said. In response to Moïse’s referendum plan, a broad section of Haitian organizations, including Protestant pastors, human rights and bar association leaders and opposition groups, has called for a two-day protest on Sunday and Monday to mark the 34th anniversary of the adoption of the very constitution on March 29, 1987, that Moïse is seeking to do away with.