The Legacy of a Human Rights Champion 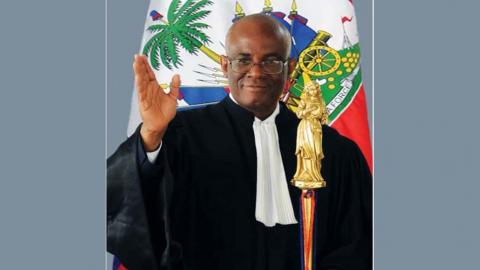 The Legacy of a Haitian Human Rights Champion and Constitutional Expert

“I do not belong to myself anymore. I belong to the country. I have sacrificed my life to serve the country. I love this country; we have a long story.”  The worldwide celebration of Human Rights Day on 10 December cannot pass without commemorating the legacy of those who lost their lives fighting for this cause. A bright light in the field of human rights and constitutional law was extinguished on August 28, 2020. Described by colleagues as a principled, humble, and independent thinker, Monferrier Dorval, an exemplary Haitian lawyer and the head of the Port-au-Prince bar association in Haiti, was shot dead at the entrance of his home.

Dorval was committed to the strengthening of democracy and the rule of law in Haiti, and his murder is an attack on these fundamental values. While he had an impressive list of accolades and accomplishments throughout his lifetime, his most lasting legacy is being a champion of human rights for Haitians, especially stateless individuals and those at risk of statelessness. In legal circles, Dorval had a reputation for being a remarkable constitutional expert and devoted professor who exceeded his reputation up until his very last day. Hours before his assassination, he called for changes to the Haitian constitution, stating live on a radio interview what is now cited as his famous last words: “I do not belong to myself anymore. I belong to the country. I have sacrificed my life to serve the country. I love this country; we have a long story.”

Of the many constitutional issues Dorval pioneered, one is of increasing importance for the people in Haiti: the reformation of the country’s nationality law. The Haitian Constitution of 1987 is the only legislation governing the issue of Haitian nationality, which can be obtained solely by descent or naturalization. “We are saddened by the sudden and violent death of Mr. Monferrier Dorval,” said Junior Remy Mauvais, UNHCR Government Liaison Officer in Haiti. “He was a vital voluntary advisor and a strong ally for UNHCR and our mandate on matters related to the reform of nationality law and analysis of gaps in the civil registry system. His legacy will live on through our collective commitment to safeguarding the human rights of all Haitian individuals, including their right to a nationality.”

From 2012 to 2017, Dorval worked closely with UNHCR, the UN Refugee Agency, to promote changes to national legislation that could potentially lead to statelessness. Together with UNHCR’s expertise, Dorval drafted a new nationality law that was presented to Haiti’s parliament for a vote. If passed, this law will provide a beacon of hope to millions of Haitian individuals. According to the Haitian National Archive, an estimated 3 million Haitians, living in and out of Haiti, are currently at risk of statelessness due to gaps in the civil registration and documentation system. Many stateless persons will grow up in extreme poverty, without basic rights, services, and access to education or health care. The lack of identity documents will additionally limit their ability to move, subjecting stateless individuals to arbitrary deportations and detentions, vulnerability to trafficking, and other unsafe situations.

“Mr. Dorval was a remarkable human rights activist who dedicated his life to protecting the Haitian people by ensuring international law instruments were incorporated within Haiti’s constitution,” said Matt Reynolds, UNHCR Representative for the United States and the Caribbean. “His prowess in analyzing the nationality law was of great importance to ensuring the rights of all Haitians, especially stateless individuals. He will be sorely missed as a strong ally to our work on matters of nationality, statelessness, and international human rights.”

The COVID-19 pandemic has proven that we are all interdependent. Society as a whole benefit when people are not left behind or excluded. The life and work of Dorval should inspire us all, including the people and Government of Haiti, to raise awareness about nationality rights, to bridge gaps, and to support efforts to pass a new nationality law that provides solutions to eliminate statelessness in the country, in accordance with the 1954 Convention relating to the Status of Stateless Persons and the 1961 Convention on the Reduction of Statelessness, both of which Haiti is a signatory to since 2018.

Statelessness and the lack of legal nationality affects more than 12 million people around the world. In November 2014, UNHCR launched the #IBelong campaign as part of the Global Action Plan to End Statelessness. The plan, which was developed in consultation with states, civil societies and international organizations, sets out a guiding framework to be taken by states and the international community as a whole to end statelessness by 2024.

On the sixth anniversary of the #IBelong campaign, Dorval’s legacy can best be memorialized through continued commitment to discussions and research on nationality issues in Haiti and to ensure that no one is indeed left behind.