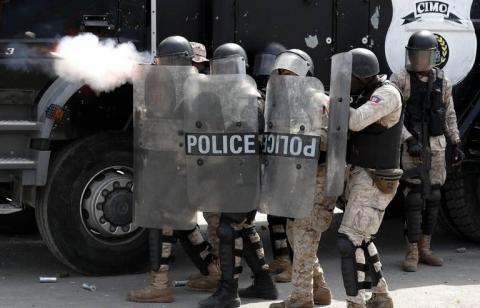 Amnesty International Verifies Evidence of Excessive Use of Force against Protesters

Amnesty International’s researchers and Digital Verification Corps have verified videos of several incidents of police using less lethal weapons indiscriminately and unlawfully, including launching tear gas out of a moving police vehicle amidst peaceful protesters, firing on protesters with less-lethal ammunition at extremely close-range, and beating a protester.   Amnesty International has also verified instances in which police, armed with semi-automatic rifles, fired live ammunition during protests, in violation of international human rights law and standards on the use of force.  Between 16 September and 17 October, the Haitian NGO, the National Human Rights Defence Network (Réseau National de Défense des Droits Humains, RNDDH), documented at least 35 deaths in the context of protests, including at least nine at the hands of the police. In the same period, they reported that more than 200 people were injured, including at least eight journalists.

Problem 1: Indiscriminate use of less-lethal weapons

According to international human rights law and standards, the use of less lethal weapons - such as tear gas, water cannon, or rubber bullets - should be limited to specific situations after careful consideration and only when it is necessary and proportionate to a legitimate police objective, as they can cause serious injury or death.

On 4 October, in the context of protests in Port-au-Prince, Haiti, law enforcement officials holding shotguns opened fire carelessly with suspected rubber bullets towards two men while they ran away and scaled a fence.

Example 3: A police officer beats a protester running away from water cannons

On 11 October, around Route de Kenscoff, Port-au-Prince, an officer beat a protester in the stomach, as he ran away from water cannons.

Problem 2:  Live ammunition used in the context of protests

International law and standards require that live ammunition is only used as a last resort and when strictly necessary to protect against an imminent threat to life or serious injury.   Firearms loaded with live ammunition are not appropriate for use during public demonstrations or other assemblies. If the use of force is required to disperse violent public assemblies, it must conform to the principles of strict necessity and proportionality.

Example 1: Security Unit of the Presidential Palace use military weapons during protests

On 16 October, at Jean-Jacques Dessalines Place, Port-au-Prince, Haiti, members of the General Security Unit of the National Palace (Unité de sécurité générale du Palais national), a specialized unit of the Haitian National Police, charged with ensuring the safety of the President and the National Palace, interrupted a funeral being held for an individual allegedly killed in the context of the protests. (According to news reports, similar funerals were held that day across the country).

Carrying modern Israeli Galil ACE rifles, a weapon appropriate for combat operations and not policing mass demonstrations, one police officer shot live ammunition into the air near the location of protesters.   Two people were injured during the incident according to RNDDH. Amnesty International was unable to verify how they were injured.

On 11 October, at least one law enforcement official fired live ammunition from a handgun towards protesters running away in Petion-Ville, when there was no evident or immediate risk to the officer, which would be the only legitimate and proportionate justification of such force. Another video from the area suggests the protests were peaceful.

Protests have been ongoing throughout the year in Haiti, principally sparked by allegations that senior officials, including President Jovenel Moïse, could be implicated in the diversion of up to US$2 billion in proceeds from oil that Venezuela provided to Haiti on favorable terms.

In February, 41 people died and 100 were injured in the context of similar protests, according to the UN Office of the High Commissioner of Human Rights.

In September, the Committee to Protect Journalists condemned the shooting of journalist Chery-Dieu-Nalio, who was injured after a senator fired a shot in the air near the senate building.

On 10 October, Néhémie Joseph, a reporter with Radio Méga, was found shot dead in his car.

For more information or to arrange an interview, contact Duncan Tucker: duncan.tucker@amnesty.org