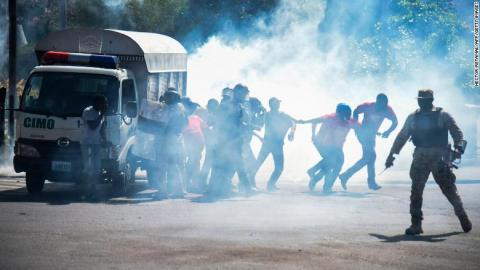 No medicines, records or equipment: Haiti hospital struggles during protests

The languid whack of a ceiling fan stirs the heat around the Intensive Care Unit. It's the only sound on the ward. Because there is none of the life-saving equipment an ICU should have.  A solitary oxygen cylinder is the only object that separates the modern scene from the medieval.  There are three ICU patients in the State University Hospital of Haiti that occupies two blocks of the capital's downtown area. The rest died, or left. "The majority of patients have fled since the troubles began (when Haiti was hit by widespread rioting). We don't have any records anymore, really. But as you can see -- there are hardly any patients," said junior doctor Wislet Andre -- one of only two still working in the facility. He specialized in emergency medicine, but the emergency room was deserted.

Violent protests and unrest have gripped Haiti since February 7, with demonstrators calling for President Jovenel Moise to resign over soaring inflation and corruption allegations. Protesters have clashed with police on the streets, cars have been set ablaze and several people have been killed. The government on Sunday called on the Haitian population to return to normal activities on Monday.  The country's capital, Port-au-Prince, has seen especially heavy violence on the second anniversary of Moise taking office.  Many more were injured. Reliable official figures don't exist because "many people have been hurt but are lying in their homes because they cannot get to the hospital for treatment," says Dr. Cadet Joseph. Nine days after the riots began a relative calm returned. Many streets were strewn with cobblestones, thrown by demonstrators demanding Moise stand down.

Hundreds gathered to stock up on petrol, cooking gas and water, which locals say is getting scarce. "The hospital has been besieged for nearly 10 days. We can't get doctors through the demonstrators and we cannot get medicines in, even if we had them. But to be honest this is normal for this hospital -- we don't have medicines, we don't have any working equipment. "So this is normal," said Dr. Andre. "Except that usually there are patients everywhere."  Over the last two years, the doctor says, patients have had to buy their own medications, dressings, all their medical supplies and come to the wards for treatment. Now many rooms are entirely empty. Broken blood pressure reading machines lined one corridor, their tubed and wires hanging to the ground.

Patients have no where else to go.  In the ICU, a 46-year-old identified only as Robenson lies inert. His legs are swollen so badly his skin has cracked. He says he's been here since December -- he's one of only three patients in an eight-bed room. "There is nowhere else for me to go," he says. "Or I would have gone." Nearby in another room Claudette, who said she did not know her age but appeared to be at least 70, sat propped up in a bed. Dr. Andre explained that like an unwanted child, Claudette had been left at the hospital by a family that could not care for her. "They said they'd be back for her -- but I don't think they will come," he sighs.s.

More protests have been called for this week by a wide range of opposition groups. Local radio stations broadcast locations where demonstrators are expected to gather.  Haiti's Prime Minister Jean-Henry Ceant stepped in last on Saturday night with a televised address to the nation, calling for calm and promising to root out the corruption -- which for many is at the root of the country's problems. Referring to the government's own auditor's report into how revenues from Venezuelan subsidized oil were siphoned off, he said: "Corruption is one of the biggest problems. We need to fight corruption" "I promise to find where the Petrocaribe money went. We need to make and example of the people who stole the Petrocaribe money," he vowed, referring to the Caribbean oil alliance. How much Haitians will accept will determine the violence and extent of protests promised for the coming days. It may mean patients can return to the hospital, but it won't solve the drugs and equipment shortages.