New to Haiti: Foster Care for the Nation's Parentless Kids 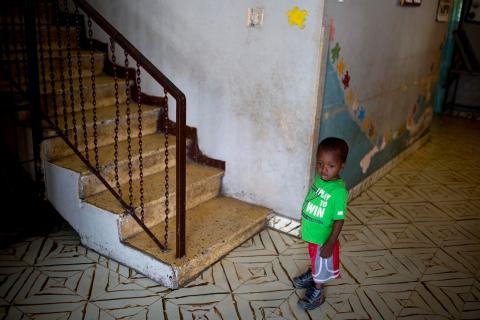 PORT-AU-PRINCE, Haiti — Like roughly a quarter of Haiti’s children, 11-year-old Franchina has spent much of her short life without parents. Her mother dead, her father in prison, Franchina was placed in a state-run orphanage as a toddler, remaining illiterate year after year and seemingly destined for a hard life in the Western Hemisphere’s poorest nation. But this year, Franchina’s fortunes took a hopeful turn. She has benefited from the newfound resolution of Haiti’s government to improve the deplorable status of the country’s children, and more specifically from a partnership between the state child welfare agency and several international child-service organizations.

In a country and region with no tradition of formal foster-care systems, they are recruiting and training Haitians who buy into the idea that being a foster parent is a noble mission. “There’s a certain satisfaction to it,” said Jeannes Pierre, 61, a Baptist pastor in Port-au-Prince who is now Franchina’s foster father. “It’s doing something extraordinary.” In her orphanage, Franchina shared a bunkroom with many other children. Now she has a bedroom to herself, small and simple but enlivened by a colorful stack of books. To her delight, her foster parents taught her how to read within weeks of her arrival. “It’s like removing the darkness from the eyes of a child,” Pierre said.

The Pierres do not know how long Franchina will be with them. “We want to keep her as long as possible,” Pierre said. And Franchina, it seems, would agree. Asked what she likes best about her new life, at first she was too shy to respond. Then she confided: “I like everything.”

Many of Haiti’s youths live on the streets; hundreds of thousands are domestic workers in other families’ homes. Franchina was among the 30,000 or so consigned to orphanage-like institutions ranging in quality from adequate to abominable. By itself, foster care won’t come close to resolving the plight of Haiti’s children. Long-term solutions are needed that for now are beyond the government’s financial reach — notably, better educational opportunities and social supports so poor families don’t feel compelled to place their children in orphanages or domestic servitude in the first place.

But the new program is cited by Haitian and foreign experts as evidence of the government’s determination to modernize and strengthen an array of child-oriented policies and practices — and lessen reliance on foreign-based charities and mission groups. “There’s no magic bullet, no one solution,” said Marc Vincent, who heads UNICEF’s operations in Haiti. “But it’s important to recognize the steps the government is taking — it is passionate about making things better.”

Some of the changes derive from the island’s devastating 2010 earthquake, which fueled a surge of international adoptions, primarily to the United States. Some Haitian children were airlifted to the U.S. even though they were not approved for adoption; an Idaho church group leader was convicted of arranging illegal travel after trying to take other children out of Haiti without government approval. Such incidents prompted Haitian authorities to sign an international convention setting ethical standards for international adoptions. Regulations were tightened and the number of international adoptions from Haiti fell sharply, from more than 1,300 a year to around 300 or 400.

The child welfare agency — known by its French initials, IBESR — also is trying to beef up oversight of Haiti’s roughly 750 orphanages. Most are privately run and financed, operating with little or no government regulation to rein in abuse and neglect. Thus far, just a few of the orphanages have been shut down, but IBESR officials say about 400 are targeted for closure unless they meet a deadline for swift improvements. Large-scale closures will increase pressure on the government to reunify affected children with their biological parents, and to find foster homes when reunification proves impossible. “We can’t go on placing kids in institutions,” said Vanel Benjamin, IBESR’s foster-care coordinator. “The answer is family.”

UNICEF estimates that 80 to 90 percent of the children in orphanages have one or two living parents. Lumos, the nonprofit founded by Harry Potter author J.K. Rowling, is among several groups seeking to reunite some of those children with their biological families, but the work is slow and the orphanage operators — often recipients of donations from well-meaning foreigners — are not always cooperative. “They don’t want to change,” said Eugene Guillaume, the Haiti program manager for Lumos. “Orphanages are their business.”

Even at competently run orphanages accredited by IBESR, heartbreak is the norm, as Dallye Telemaque Bernard, director of the Nest of Hope home in Port-au-Prince, makes all too clear. She oversees the care of about 50 children, ranging in ages from 5 months to 13 years. Some are brought in by government social workers, or by police who find them in the streets. But most are dropped off by their impoverished parents. “Some children come here very sick, from families in very bad economic situations,” said Bernard. “Ideally, there should be a program to help the children stay with their own families, but there isn’t.”

Sections of her orphanage are cheerful, including a courtyard where children take art classes around brightly colored plastic tables. But the upstairs bedrooms, with sets of four or five bunk beds lining the walls, are spartan — including one bedroom set aside for infants. Bernard said the babies generally arrive from Port-au-Prince’s largest shantytown, Cite Soleil, dropped off by heartbroken mothers. “It’s difficult for them,” she said. “But they don’t have a choice.” Over the years, the goal for most children at the orphanage has been to arrange their adoption by families in Europe or North America. On a bulletin board in the entryway, there are photos of children posing with their adoptive families in France, Canada and elsewhere.

With Haiti now cutting back on such adoptions, Bernard wishes there were ways to reunify more children with their biological families — and she’s also intrigued by the new foster-care program. One recent visitor was a 23-year-old woman from Cite Soleil who had placed her son in the orphanage six years ago, when he was 2. He was adopted by a family in France last year, and the mother, Kenia Tunis, came by to see some photographs of her son sent to Haiti by his new family.

Tunis began to cry as she told her story, glancing at the photographs. Someday, she said, she hoped she might see her son again in person. Would she have preferred him to be adopted by a Haitian family? She chose not to reply.  The foster-care program began three years ago in Port-au-Prince and the southern city of Les Cayes. This month, at a modest resort hotel, about 100 government officials and social-service providers gathered to extend the program into the northern region around the city of Cap Haitien. “Today is a day of victory,” declared Antonio Jean Louis of Children of the Promise, a Christian-oriented mission. “There’s now an option besides international adoption.” Among the attendees was IBESR’s Vanel Benjamin, who said the program will keep expanding to other regions of Haiti, with a goal of having 200 foster families accredited by the end of this year.

International adoption “should be the last resort,” he said. “Foster care is a better alternative.” In the United States, there’s a constant struggle to recruit foster parents even though they’re generally paid many hundreds of dollars a month. In Haiti, the plan is to build a foster care system exclusively with parents willing to take on the task at their own expense. One of the groups recruiting and training foster parents is Bethany Christian Services, which for decades has been a leading adoption agency in the United States. Recently, it has helped countries such as Ethiopia and Haiti develop their own foster-care systems. Bethany’s recruiting in Haiti focuses on a network of Protestant churches where pastors extol foster-parenting as a Christian act of love.

“People in the churches have responded positively even if they don’t have a lot of financial resources,” said Vijonet Demero, head of Bethany’s Haiti operations. “For them, it’s a calling, not a job.” Jeannes Pierre and his wife Nelia have an adult daughter who recently became a physician. Over the years, they have provided a temporary home to other children on an informal basis. Never had they received the type of formal training that was required to become foster parents. As the foster-care program took shape, some advocates for children expressed concerns related to Haiti’s huge population of child domestic workers. UNICEF estimates that roughly 400,000 children — called “restaveks” by many Haitians — live away from their parents in households where they’re expected to perform work on a regular basis in return for lodging and food.

Some of these children are treated well and included in the family life of the home; others suffer various forms of abuse, prompting some advocacy groups to depict such arrangements as “child slavery.” Aspiring foster parents are screened to ensure they’re psychologically and economically capable of caring for foster children without exploiting them. Demero said the foster families recruited by Bethany are visited at least every three months — and in some cases every week — by social workers from Bethany or IBESR. Terre des Hommes, a Swiss-based nonprofit also working on the foster-care program, said the lack of payment to the foster parents complicates recruitment efforts but serves as a deterrent to families who otherwise might sign up for financial gain.

Even in the absence of regular payments, foster families can be provided with emergency funds to meet medical needs or cover the costs of school uniforms and supplies. Among the earliest batch of new foster parents were Ezekial Isme, 32, and his wife, Guerna, who heard about the program at their Port-au-Prince church, where Vijonet Demero is pastor. “Our hearts were opened,” said Ezekial Isme, who teaches at a church-run school. Two and a half years ago, when the Ismes took in a girl from a troubled orphanage being closed by the government, they had no children of their own. They now have two sons, 1 and 2 years old, along with Michelene, who’s now 10. According to Isme, Michelene was 3 when her parents gave her to the orphanage. She was the youngest of her family’s nine children. When Michelene arrived in her new foster home, she was very withdrawn and had a bothersome skin disease. With attentive care, she’s healthy now, and doing well at school, although still not up to the normal grade level for her age. The Ismes would be willing to adopt Michelene, but don’t know if or when the government would allow that sometimes difficult process to begin. “She’s our girl — she feels at home with us,” Isme said. “Our hearts have already adopted her.”