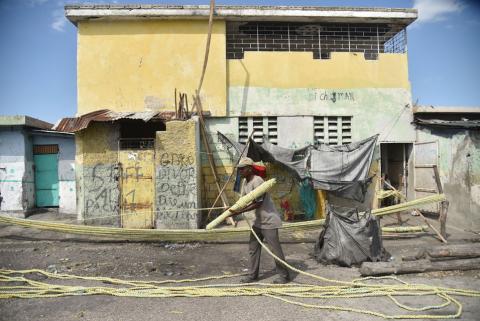 CITÉ SOLEIL.- Book by book, and with donations large and small -- some from people who are illiterate -- a library is taking shape in one of the poorest places in destitute Haiti.  Cite Soleil, a slum in the capital Port-au-Prince that is home to half a million people, used to be known for how dangerous it was as gangs fought each other in its narrow alleys for control of the neighborhood.  That violence ended about two years ago, and one of the young men living in the slum came up with the idea of building a place for people to read and learn. "The youths who were fighting each other reached an understanding. They wanted peace. So we said we needed to create a movement to get guns out of kids' hands and replace them with books," said Joseph Benson, 27.

Access to education is weak in Cite Soleil, which opens onto Port-au-Prince Bay -- it has only one public high school. Nationwide, half of all Haitians cannot read or write, according to the UN children's agency (UNICEF).  Over the years, Haiti has seen many social development projects win financing from non-governmental organizations or foreign countries but many did not make it off the drawing board. Of those that did, many fizzled out due to lack of public support.  The youths behind the library project were acutely aware of this, and went directly to the people of Cite Soleil.  "We decided we had to get everyone in Cite Soleil involved. So we took to the street and started asking for donations," said Benson.

The name of the project features the Creole word 'konbit', which recalls collective work done in the countryside in this Caribbean country, the poorest in the Americas.  Over the course of a year, the equivalent of around $74,000 and some 10,000 books have been collected.  Construction began a month ago. The library complex will include a conference room, a cafeteria and a computer lab, and the completion date is unclear.  The total budget for the project will be about $500,000 so fundraising is ongoing -- and easier as residents see the project unfold.  Everybody who donates gets their picture taken. Help is also coming in from foreigners.  The donating spirit has even hit a police station across the street from the job site: it is donating water for two months to help prepare cement.

An officer assigned to Cite Soleil has become one of its biggest champions.  "As I am directly involved in security issues, I understand the need to reach out to young people," said Ricardo Antonio Joseph, who belongs to a unit specializing in crowd control.  Joseph finagled a donation of 550 books from a publishing house where he has contacts.  More than 4,000 donors altogether have chipped in toward building the library.  "If we want calm to remain here, everyone needs to participate. It's not just the job of elected officials or residents of Cite Soleil, but it's everyone's responsibility," said Joseph.

Louino Robillard, one of the leaders of the project, said he has been moved by donations from the poorest of Haitians.  "What has really pleased me and motivated me are people who do not know how to read but who still give money and say, 'Here are my 50 gourdes. It is for my child. I want him to get a good education,'" said Robillard. That's less than a dollar. He said 80 percent of the donors are people from Cite Soleil -- students, merchants, professionals.  "This means we have a population that is willing to change its way of thinking," he added.  The team spirit of the slum has inspired hope in the foreman of the construction site, Lexy Feton.  "I have seen a lot of things in Cite Soleil but this is the first time there has been such a project. Everybody in the neighborhood helps as much as they can," the 45-year-old man in a hardhat said.