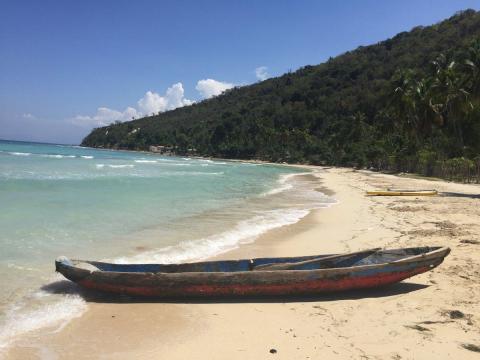 President Trump may have given Haiti an unlikely boost when he labeled the Caribbean country a “sh--hole” last month.  The comment — made during an immigration meeting in the Oval Office — has prompted a spike in Google searches and general curiosity about this much misunderstood country, spurring visits like the one filmed by late night host Conan O’Brien for a recent TBS special.  Pristine beaches, mountaintop fortresses and eclectic artist enclaves are not what spring to mind when most Americans consider Haiti. Poverty, political strife and natural disasters have long shaped the narrative around this Caribbean nation, which shares the island of Hispaniola with the Dominican Republic.  A typical daytime street scene in Port-au-Prince, a city still recovering from the effects of Haiti’s 2010 earthquake.

But, as Haiti continues to recover from the devastating earthquake of 2010, its natural assets and cultural treasures are returning into focus, and growing increasingly accessible.  Tourists have actually flocked to Haiti for centuries. The first, Christopher Columbus, landed in the port city of Cap-Haïtien in 1492. In the 1960s and ‘70s, Mick Jagger and Jacqueline Kennedy Onassis leisured in the capital, Port-au-Prince. Today, aid workers and NGO contractors outnumber vacationers. But with a growing corps of grassroots travel operators highlighting Haiti’s heritage sites and the emergence of new festivals celebrating local culture, the seeds of a tourism revival are taking shape.

Orient yourself on arrival with a visit to Musée du Panthéon National Haïtien, or MUPANAH. This compact museum, set underground in the heart of Port-au-Prince, illuminates Haiti’s complex legacy as the first republic founded by free black slaves. Among the remarkable artifacts here is the actual anchor from Columbus’ Santa Maria ship, and the pistol with which Henri Christophe, a leader of Haiti’s revolution and briefly its king, took his life in 1820. For an intro to Haiti’s natural beauty, head beyond the Port-au-Prince suburb of Petion-Ville, past the pastel shanty houses of Jalousie, to Mount Boutilliers, home of the aptly-named L’Observatoire. The panorama that unfolds from this stylish alpine bar and restaurant is awesome. Come before sunset, and let your preconceptions about Haiti wash away with a round of Rhum Barbancourt or Prestige beer.

Port-au-Prince boasts two of the Caribbean’s most intriguing hotels, each of which are attractions in their own right. Insulated from the capital’s hectic downtown by lush gardens, Hotel Oloffson (hoteloloffson.com) i s one of Haiti’s great icons. This gingerbread mansion was built in the 1890s by the Sams, a prominent family that produced two Haitian presidents. Today the Oloffson is operated by Richard Auguste Morse, leader of the band RAM, which holds court in the hotel’s enchanting lobby every Thursday night. This weekly ritual, combining traditional vodou incantations and folkloric sounds with rock, has persevered uninterrupted for 28 years.

The Marriott Port-au-Prince (marriott.com) shatters chain-hotel stereotypes. Philippe Dodard, the “Picasso of Haiti,” curated the décor, and local folk art is woven into every corner, from the bull-horn lampshades that hang above its main staircase, to the papier-mâché masks in the guestrooms. A poolside patio hosts live jazz, while the La Sirene restaurant offers delicious takes on Haitian staples griot (fried pork) and lambi creole (conch in a spicy red sauce). The intricate iron installation behind La Sirene’s bar comes from Noailles, an enclave in Port-au-Prince's northwest renowned for its metalwork. Here, you’ll find the workshops of some 60 artisans, chiseling brilliant crafts from post-industrial waste.

To visit Haiti’s premier attraction, Citadelle Laferrière, depart Port-au-Prince for the port city of Cap-Haïtien, in the north. The country’s largest cities are under 100 miles apart, but driving through the mountainous interior can take over seven hours. For $85 each way, Sunrise Airways (sunriseairways.net) will shuttle you between them in minutes. From Cap-Haïtien’s Hugo Chávez International Airport, it’s a short drive past distilleries producing clairin, a spirit made from cane sugar, to the village of Milot. There, you’ll find eager guides with horses ready to direct you up Bonnet a L’Eveque mountain to the Citadelle.  A UNESCO World Heritage site, this vast fort complex was built by Henri Christophe immediately following independence from France. Remarkably well preserved, it’s now a museum boasting one of the world’s largest collections of 19th century artillery. Below the Citadelle, in Milot, lie the ruins of Sans-Souci Palace, Christophe’s royal residence. Sans-Souci hasn’t weathered the elements as well as the Citadelle, but its wear gives it a haunted, magical beauty.

South of Port-au-Prince is Jacmel, Haiti’s “Ville créative.” This port city, with Creole architecture resembling New Orleans’ French Quarter, is liveliest during Carnaval in February, when residents flood the streets in elaborate costumes made of papier-mâché. Art permeates Jacmel’s rustic downtown. Mosaic murals color alleyways, stairwells and public spaces like Lakou New York, as the city’s newly spiffed-up waterfront promenade is known. Tours of artist workshops are available through the Jacmel tourism office.  Jacmel is a convenient launchpad for other attractions in Haiti’s south. Fortunately, it has Hotel Florita (HotelFlorita.com), a converted 19th century residence that’s resisted all modernization save electricity. Florita’s bar, renowned for its rum sours, hosts occasional events like the Clairin World Championship (TheSpiritofHaiti.com), a cocktail competition scheduled for early May. Jacmel’s Old Town, home to rustic Hotel Florita, is said to have inspired the architecture of New Orleans’ French Quarter.

Just outside Jacmel is Bassin Bleu, a cluster of emerald pools fed by waterfalls. Note the weather before making this trek: rains turn the water a chalky color that won’t make the swim any less refreshing, but will spoil your photo op.  Haiti’s best-kept secret is its beaches. Bananier Beach (BananierBeach.com), accessible only by boat, is available for private rental through the operators of Port-au-Prince’s La Lorraine Hotel (lalorrainehaiti.net). For $300 (covers up to four adults), they’ll set you up with transportation, food, drinks and a weekend’s accommodation in a spartan two-bedroom villa along this palm-lined paradise. You’ll have your own private beach area, with other people using nearby areas down the beach during the day.)

Kabic, about a 15-minute drive from Jacmel, is the only beach in Haiti where you can rent a surfboard. The sport arrived here in 2010, when an American doctor volunteering in Jacmel raised funds to import boards for local youth. Now young men, those same kids run the Surf Haiti (Surfhaiti.org) concession across from La Reference restaurant, where they can also be hired for lessons. The organization hosts July’s Surf Haiti Festival, which last year played out side by side with Kabic Fest, a Kreyol music festival. The dual events drew a mix of local music fans and international surfers, offering a glimpse into Haiti’s promising future as a niche tourism destination.

Standard rooms at the Marriott Port-au-Prince start at $144 a night; discounts are available on reservations booked 14 days or more in advance. Standard rooms at the Hotel Oloffson are $100 a night; bungalows are $125-150; suites are $200. Rooms at Hotel Florita range between $58 and $188 a night.