Haitians Get Six Months of Protection From Deportation 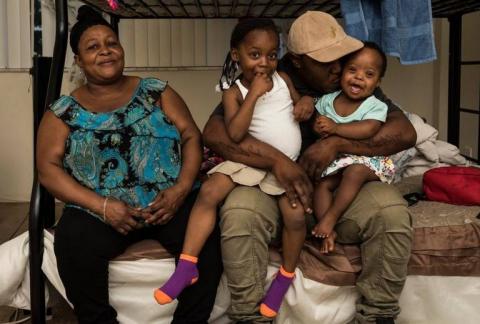 Tens of thousands of Haitians who have been protected from deportation since an earthquake hit their disaster-prone homeland won one more temporary reprieve Monday: the Department of Homeland Security is extending the benefit, which expires on July 22, for six months. But the end is coming, DHS officials warned, telling the 58,706 Haitians enrolled in the Temporary Protected Status program, or TPS, to use the time “to handle their affairs.” “This six-month extension should allow Haitian TPS recipients living in the United States time to attain travel documents and make other necessary arrangements for their ultimate departure from the United States, and should also provide the Haitian government with the time it needs to prepare for the future repatriation of all current TPS recipients,” Homeland Security Secretary John Kelly announced.

Kelly’s decision, which had become the focus of an unprecedented social media and letter-writing campaign in communities across the United States, was received with mixed emotions. While some breathed a sigh of relief at the prospect of six more months in the United States, others panicked at the new Jan. 22 deadline. “There’s just no way that in six months the nation of Haiti could absorb 60,000 of its people back,” Democratic Florida Sen. Bill Nelson said from the Senate floor Monday as he called on Haitians to be patient. “It would be like trying to swallow a bite of food that is way too big, in order to do it.” Nelson said he had spoken to Kelly — who plans to travel to Haiti to meet with Haitian government officials — and urged him to reconsider an 18-month extension. Republican Sen. Marco Rubio also promised to continue working with DHS and the White House on the issue. “Last week, I asked the White House to extend the TPS deadline for Haitians until at least Jan. 18, and I’m glad to see that the administration agreed,” Rubio said. Florida Gov. Rick Scott tweeted a similar statement.

But to many Haitian activists and others, the reprieve isn’t a victory and doesn’t ease the anxiety of TPS recipients who now have to reauthorize their work authorizations. "We are leaving people hanging. It’s cruel and inhumane. Six months, and then what?” said Marleine Bastien, a leading voice in the push to renew TPS. “The conditions in Haiti are horrible enough for them to renew TPS for 18 months to 24 months. It’s not a win to us, and certainly not to the families.” The announcement came on the same day the State Department issued an updated warning on travel to Haiti, and a day before the House Judiciary Committee is set to consider a bill, H.R. 2431, that seeks to put limits on TPS extensions. It would require congressional and presidential action. “Essentially, congressional Republicans in the House Judiciary Committee are proposing to functionally kill TPS,” said Tom Jawetz, vice president for immigration policy at the Center for American Progress. “That’s the mindset that we are beginning with in this issue, and that’s the background I have when I look at the outcome of today’s announcement and think, ‘We live to fight another day.’ ”

Haiti, which was granted TPS days after the earthquake by the Obama administration, is currently among 10 countries with the designation, senior DHS officials said Monday afternoon in a call with reporters. Others countries coming up for renewal are Sudan and South Sudan in November, and Honduras, Nicaragua and El Salvador in early 2018. The Central American nations won the designation after Hurricane Mitch barreled through Central America in 1995. While some fear that Haiti will now get caught up in a larger debate about TPS or immigration policy, Jawetz sees it as an opportunity for Haiti supporters to join with the more than 200,000 Central Americans.

DHS officials said that Kelly is re-evaluating all immigration programs and benefits. He will decide on each country individually, they said. Last month, acting U.S. Citizenship and Immigration Services Acting Director James McCament sent a memo to Kelly recommending termination of TPS for Haiti. McCament said TPS for Haitians should end in January — six months after the program’s current July 22 expiration day. For months, Haiti TPS supporters have argued that the country continues to suffer from the effects of the earthquake, a deadly cholera epidemic, a hurricane that struck in October and a food crisis prompted by a three-year drought. “There are still tent cities from the earthquake,” said Rep. Frederica Wilson, D-Miami, who wants Kelly to travel with her to Haiti to see the “unconscionable” conditions. “They will take you and you will never see the tent cities. I want someone to go with me. I will be sure to take them to the places to see, so that they will be more inclined to extend it even further.” And state Sen. Daphne Campbell called the decision “a slap in our face.”

“What is six months?” Campbell asked. “As soon as you put your head down to sleep, it’s six months. After six months, what is next? The TPS people are invested in this country. They have businesses. They have homes here. Immigrants built America.” On Monday’s conference call with reporters, DHS officials said Kelly based his decision on conversations with Haitian government officials and conditions in Haiti, which “have substantially improved since the earthquake in 2010.” The officials added that Kelly had received “commitments and statements from the Haitian government that they actually do in fact want their TPS recipients living in the United States to return to Haiti to help rebuild their country.” “They are precisely the type of people who have an entrepreneurial spirit, jobs skills... even some additional English-language skills that would help really facilitate the development of Haiti, its economy, and provide jobs and additional vital services that are needed to help bring Haiti to the next level.”

But Haiti’s ambassador to the United States Paul Altidor disputes that. He and Haiti’s Foreign Minister Antonio Rodrigue met with Kelly and McCament on May 15. DHS’ assessment of the conversation, Altidor said, contradicts the tenor of the discussions and the letter that he sent on behalf of Haiti’s government. “There was no ambiguity as to what we asked for. … At least 18 months was a key part of the conversation,” Altidor said, noting that even that amount of time would be insufficient. Both Haitian officials recognized that TPS was temporary, Altidor said. But he and Rodrigue also noted that Haiti has been plagued by other issues: Hurricane Matthew created nearly $3 billion in damage. Foreign donors failed to make good on $10 billion in pledges after the earthquake. Non-governmental organizations that flooded Haiti after the disaster allowed resources to go to waste. Despite all that, Altidor said he and Rodrigue told DHS Kelly and McCament that the new Haitian government was moving forward — but needed time.

“The idea that TPS would not be renewed... would actually create a major issues for Haiti to be able to move forward in terms of putting it back on track to rebuilding itself,” Altidor said. Kelly insisted that Haiti has made substantial progress since the quake left 300,000 dead. “The Haitian economy continues to recover and grow, and 96 percent of people displaced by the earthquake and living in internally displaced person camps have left those camps. Even more encouraging is that over 98 percent of these camps have closed,” he said in a statement Monday. He also cited Haiti’s plans “to rebuild the Haitian president’s residence at the National Palace in Port-au-Prince and the withdrawal of the United Nations Stabilization Mission in Haiti.” The World Bank is predicting that Haiti’s economy will decline by 0.6 percent this year. Haiti’s government recently raised gas prices to $3.31 a gallon in a country where most of the population lives on less than $2.42 a day.

On Monday, some TPS recipients welcomed even six months more in the U.S. Jimmy Parfait, a North Miami Beach resident who left Haiti 15 years ago with his mother, Marie, and four siblings — all TPS recipients — remained optimistic. “You never know. They will probably extend it for another six months,” he said. “Hopefully something good comes out of it.” The call for extension garnered bipartisan support among U.S. lawmakers and state officials in Florida, New York and Massachusetts. Over the weekend artists from hip hop star Wyclef Jean to several Haitian konpa musicians called on Kelly and President Donald Trump to extend TPS. Concert attendees during the two-day Haitian Compas Festival were also provided with phone numbers for DHS and the White House. And on Monday, a Tweet up was started to “#SayYestoTPS” and to “#SaveTPS.”

Before Monday’s announcement, activists had criticized reports that Homeland Security has been conducting a probe to determine if Haitian TPS holders had criminal histories, and whether they were obtaining public benefits, which they are not eligible to receive. The Associated Press published portions of leaked internal emails from USCIS policy chief Kathy Nuebel Kovarik telling staff members to look for stories about rebuilding in Haiti and reports of criminal activity by those with TPS. On Monday’s press conference in Little Haiti, members of the Haitian community said they worry that the end of deportation protection will mean breaking up homes. A 10-year-old girl, also at the press conference, who gave her name as Vanessa, said she sometimes searches facts about the humanitarian crisis in Haiti because she’s worried about her parents leaving her. I’d be scared because without my parents, I would be nothing,” she said, fighting back tears. She appealed to President Donald Trump. “I believe that you’re gonna help us because you’re a father and the president of the United States,” she said.