Look Beyond the Rubble to Haiti's Rich History and Natural Beauty 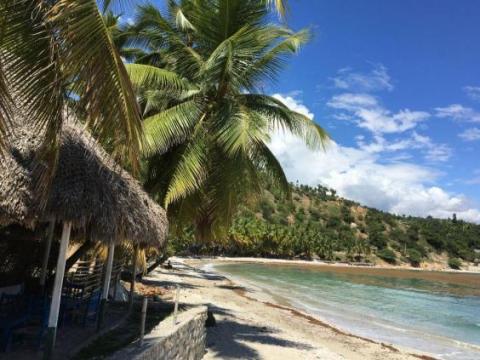 Haiti: look beyond the rubble to find its rich history and natural beauty

“Why come to Haiti? Because it is overwhelming. It’s out of your comfort zone. Because it will shake you. That’s why you should come.” Jean Cyril Pressoir, travel operator and tour guide, is right. Sipping on rum in a Cap-Haïtien beachside restaurant, the heat palpable and kompa music blaring, I’m taking stock. It’s been three days since I arrived in Haiti. In that time, I’ve travelled from the throbbing, beautifully chaotic capital, Port-au-Prince, to the more sedate but no less vibrant north.  Just say the name Haiti and newsreel images of this Caribbean nation’s recent past can’t help but come to mind. Political turmoil. Civil unrest. The devastation of 2010’s earthquake, of course. And most recently, a hurricane in the south estimated to have claimed up to 1,300 lives.

It’s a sobering juxtaposition at first for those freshly arrived, like me, solely in search of a good time. I’m in Haiti as one of those rarest of things; a tourist.  From Port-au-Prince’s international airport to the city centre takes you through a small section of the city’s slums. Goats and pigs pick at piles of burning rubbish. Teens poised at red lights wait to wash the windows of halted traffic. My first hotel meanwhile, has a lush tropical pool and armed guards. Yet to frame Haiti solely this way would be doing it an unjust disservice. Life is moving on. And Haitian’s want you here to see it.  Haiti may be little discussed as a tourism destination today, but it wasn’t always this way. Before Cuba, there was Haiti. In the 1950s and 60s, Port-au-Prince’s intoxicating mix of music, gingerbread architecture, and colourful art, inspired Hollywood greats, artists, and bohemians to flock here. Those things are still here. Many of the capital’s many great historic mansions remain earthquake bruised, but they’re no less beautiful for it.

Spend just a few days here, and Haiti’s entirely unique culture begins to seep in. The busy streets, infectious vibrancy, and at times, nonsensicalness, get under your skin. Get stuck in traffic (common) and you’ll see what I mean. It’s an excellent opportunity to tap tap spot. Haiti’s buses carry elaborate murals of anyone from Jesus, to Donald Duck; basically, whoever the owner felt like portraying. Arnie and Beyoncé are side-by-side on one. But my all-time favourite, is one I spot painted simply with the words ‘You see Dave’. In Haiti, art is everywhere.

“One of the reasons we wanted to start a tour was to put it on the radar. To help Haiti rebuild its image,” says Kelly Galaski, from adventure travel company, G Adventures.  In 2013 G was asked by the Inter-American Development Bank to assess Haiti’s tourism readiness. What Galaski found was a country of picturesque cities and staggeringly beautiful and unspoilt scenery – mountains, pristine waterfalls, and this being the Caribbean, white sand beaches. It’s a poignant irony that Haiti’s rich culture and stunningly landscapes are so intact because there’s been such little development here. G’s ten-day tour, which I’m following, visits all. But that’s not why you come.

You come because Haiti is unique. And proud of it. The first and only nation in the world born of a slave revolt (in 1804), Haiti’s African and European roots imprinted on its Creole culture in still living and breathing ways. Vodou – a fusion of African religions, Roman Catholicism and other influences, such as Freemasonry – is a vivid example. Widely practiced across Haiti, temples become easy to spot, while ornate sequin flags bearing symbols seem omnipresent. G tour takes you to meet a priest.

“Haiti’s culture is so rich,” adds Galaski. “We really felt that showing that off to the world was a great way that we could try change perceptions, and help bring-up the image of the country.” With a significant cruise port in Labadee in the north, and some beach resorts, tourism was already here, albeit behind fences and closed gates. G’s vision was different. In 2015 it began tours, working with the local expertise including Pressoir, to give travellers an immersive dose of local life.

Group tours offer the easiest way around Haiti. “We can’t do backpacking. We just don’t have the infrastructure”, says Valérie Louis, executive director of the Association Touristique d'Haïti. Tap taps – though friendly on the eye –  are not tourist suitable. And tours like G’s, where the price includes transport, hotel stays, some included meals, also help keep costs down. Haiti isn’t cheap. While a good hotel is upwards of £100 per night, budget around £20 per meal. For lobster grilled on the beach though, I have to say it feels worth it.

Beginning and ending in Port-au-Prince, G’s tour takes you to the furthest reaches of the country, from the cultural stronghold of the north, to the beaches of the south.  On the road, it’s hard not to fall for Haiti’s bucolic charm. Outside of Cap-Haïtien city is sugarcane country, where barrels of sugar syrup sit by the road. Small metal structures house distillers who make rum the same way they’ve done for hundreds of years.

But perhaps Haiti’s ‘top’ tourist site, is the nation’s ‘birthplace’, the nineteenth century, UNESCO World Heritage Site Citadelle, and Sans-Souci palace. Here at the Citadelle, high-up in the mountains the newly independent nation armed itself against any further colonial threats.  Vast, unused stacks of cannon balls and ornate cannons still sit and wait for a threat that never came. It’s a stirring place. Clouds pour in through the vast fortification’s windows. Birdsong punctuates the silence. Like many places in Haiti, you’ll likely find yourselves one of a handful of visitors. Hike up, or hire a horse to do the hard work for around USD £10.

In the South, you’ll swim in pristine bright blue waterfalls like Bassin-Bleu, near arts capital Jacmel. Recent tourism investments have added bright mosaics to the streets. And tours are now returning to the hurricane hit south, injecting much needed cash into the ocean-front communities that took the brunt of October’s hurricane.

G Adventures also specialises in travel with a socially responsible bent. Stop offs to sip rum with locals, to make traditional kasav flatbread in the countryside, or paint papier-mâché with at-risk kids cared for by the Art Creation Foundation for Children, are included in the trip. These aren’t touristy gimmicks. Haiti doesn’t have those. Yet. Instead visitors present a way to put money directly into local economies.

Increasing tourism is a key pledge of the new Haitian government, as something that can help rebuild the nation, providing vital infrastructure. Things will, and are beginning to develop. But for now, Haiti offers somewhere raw and unchanged for those that want to experience a culture, without any sugar-coating. And that’s a beautiful and overwhelming thing to experience.

“I understand that people are still a little bit worried and scared of Haiti,” says Pressoir. “But if you ask, ‘How can you help Haiti?’, come as a tourist. Help us break from away from this pre-conceived idea, this prejudice that has us defined as a place where you come to help. Don’t come to help us. Come to enjoy yourself.”