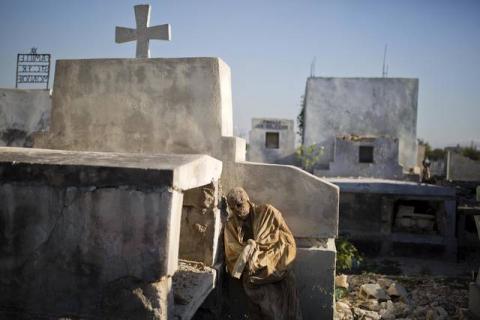 Aspasie Tanis lives hand-to-mouth on the edge of eviction in the best of times, scraping out a living selling packets of spaghetti and cookies outside her low-slung concrete shack in Haiti’s capital. Now the death of her father by stroke threatens to send her into a lifetime of debt. The distraught single mother is frantically seeking loans from friends and pastors to pay for the cheapest funeral on offer. Hospital morgue officials say her father’s body will be dumped in a pauper’s grave unless her struggling family forks over a relative fortune of just over $1,000. “I’ll never be at peace if he isn’t buried properly,” Tanis said quietly after transferring her father’s corpse to a cut-rate private morgue.  Her anxiety is shared by many in Haiti, where two out of three people live on less than $2 per day and burying the dead is a predatory business. While funerals are costly in any number of countries, Haitian undertakers get away with charging rates that exceed what most citizens earn in a year. Along the capital’s bustling Rue de l’Enterrement, established morticians and unlicensed freelancers engage in a daily bidding war for new customers while telling bereaved families that anything less than their set packages can be seen as a lack of respect for the dead.

Teams of entrepreneurs, including videographers and brass bands who lead street processions, stand ready to rack up funeral bills with families who are frequently ill-equipped to pay for any of it. There are even mourners-for-hire for those who want the social prestige of a big sendoff. “I can provide people to cry, roll on the ground, whatever you want,” chuckled Joseph Jacques Simeon, director of the General Hospital’s morgue department. He acknowledged to an Associated Press reporter that he gets a cut from the funeral packages families agree to when they arrive, shaken, at his office.  A 2012 report by the Brazil-based Igarape Institute indicated that funeral costs in Haiti average about $5,000 per household and interest rates up to 150 percent were charged by moneylenders and morticians. “In some cases we see poor families paying significantly more for mortician services than middle-class families because they are less informed about options and don’t believe they have the room to negotiate the costs,” said researcher Athena Kolbe, a co-author of the report.

The bereaved Tanis, who used what little savings she had to try and keep her father alive, appeared highly vulnerable to influence. When Simeon insisted that the cheapest package was about $1,000, Tanis and her unemployed brother passively accepted add-on services like a funeral video and didn’t press to find out how much another morgue would charge them while they sought cash for a funeral package. While many Haitians pool resources and seek funeral expenses from relatives living overseas, there’s no shortage of grief-stricken families who sell possessions or take out high-interest-rate loans, in part due to deep traditions for open-casket funerals and social pressures to bury loved ones with a splash.  “This is particularly true for poorer people and for people in rural areas where social pressure is stronger,” said Carine Roenen, director of Fonkoze Foundation, a non-profit working with Haiti’s biggest microfinance institution. Pitchmen often start hustling as soon as word gets out there’s been a death in a family. Fly-by-night hearse drivers, prying neighbors and even hospital physicians will bring bereaved families to undertakers, competing to claim a finder’s fee of 10 percent that mortuaries dole out to intermediaries.

Established funeral homes want authorities to rein in freelance morticians who cut into their business. But nothing has been accomplished by the state to tame the uncontrolled market, and licensed parlors reluctantly rent out their morgues and viewing rooms to get a piece of the barely cheaper packages offered by self-styled undertakers. “This business has gotten crazy. More unlicensed people with nothing to offer get into it every single day,” said Zenith Funeral Home and Morgue owner Marie Lamercie Louis Dorville, whose priciest package offers embalming, metal caskets, interment and other features costing over $7,000. The median cost of a funeral in the United States is $7,180, according to the most recent figures by the National Funeral Directors Association.

Haitians are largely resistant to cremation due to religious and cultural traditions. Jean Pierre Mercelien, an 18-year-old who is learning how to upholster casket linings, is one of the latest recruits to Haiti’s byzantine burial business. “It’s a good living because there will never stop being new customers,” he said matter-of-factly in a yard with men building wooden caskets and decorating them with cushions and aluminum handles.  Business is booming on Rue de l’Enterrement even though there’s little space left in the crowded capital to entomb the dead. Such is the demand in the sprawling Cemetery of Port-au-Prince that families rent out space in a mausoleum for two or three years, enough time for a body to decay to a skeleton. After that, cemetery workers say they generally dump the bones in a vault or temporarily leave them scattered in a dilapidated corner to make room for the next paying customer. Few families come to collect the remains.

A walk through the once beautiful landmark revealed ghoulish scenes of skeletons lying in opened caskets, ribs and vertebrae scattered inside sun-bleached suits with ties still knotted and dresses zipped up. A few bodies tossed on the ground by workers still had mummified skin on their skulls. On a recent afternoon, the air was thick with the emotional fallout of Haiti’s uncontrolled funeral and burial business. One mourning family was stopped at the cemetery gates and told their funeral director neglected to pay to get a casket-carrying hearse inside. “I paid the funeral home for a whole package! This is how they treat us? They embarrass us at the cemetery?” raged mourner Franky Merzier. Sucking his teeth, he then pooled together $145 to get the beat-up rented hearse carrying his late cousin Gertrude to her temporary tomb.