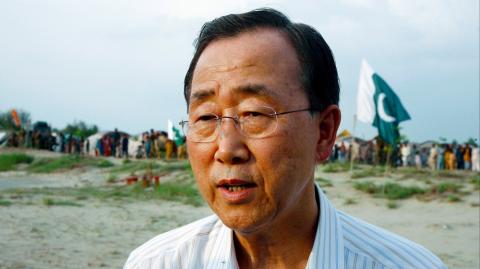 Outgoing UN Secretary-General Ban Ki-moon today apologised for the UN’s role in the spread of cholera in Haiti, but stopped short of admitting that peacekeepers brought the disease to the country in 2010. More than 800,000 Haitians have been infected and 9,100 killed in the ensuing epidemic, which was tied to the untreated sewage of Nepalese peacekeepers who arrived just prior to the outbreak in the wake of a catastrophic earthquake. In the more than six years since, the UN has never admitted responsibility. However, Ban recently began to signal a change in direction after an excoriating critique of the UN’s legal approach to the crisis was leaked this August – with just five months left in his term. The report, written by Philip Alston, a professor of law and the UN special rapporteur on extreme poverty and human rights, described the UN’s handling of the epidemic and continued denials as a “disgrace”. Alston called for compensation – rather than simply humanitarian funding – and for the organisation to acknowledge the facts of what took place. The UN responded at that time by stating that it accepted a “moral responsibility” to deal with the spread of cholera. "By admitting it has a moral responsibility, the UN showed it can admit to making mistakes"

Today was very different. Ban opened his remarks with a rare apology on behalf of the UN, spoken first in Haitian Creole, then in French, and finally in English. But it was also carefully worded. “We simply did not do enough with regard to the cholera outbreak and its spread in Haiti,” he told delegates. “We are profoundly sorry for our role.” Earlier in the day, the UN released further details of the secretary-general’s parallel cholera response plan. The outbreak, the document stated, had become “a stain on the organisation’s reputation”. The response, first outlined in October, calls for a two-track approach, with $200 million delegated for each. The first would fund sanitation and eradication projects; the second – termed “material assistance” – would be aimed more directly at those affected by the epidemic. As he fleshed out details of that second tranche, Ban said consultations with “communities, victims and their families” would continue into 2017. “This support could take many forms, including projects to alleviate the impacts of cholera and strengthen capacity to address the conditions that increase cholera risk,” the secretary-general said. “It could also include projects reflecting community needs not directly related to cholera, such as education grants, micro-finance or other initiatives.” Ban appeared sceptical of the prospect of payments made directly to the families of those who died. UN officials involved in the response have previously told IRIN that such an undertaking would be exceedingly complicated due to difficulties in establishing the identities of victims and their closest family members – something the secretary-general echoed in his remarks.

The major problem is that, effectively, no funding has been promised for that second tranche – the so-called material assistance – a problem IRIN revealed several weeks ago as pressure grew on the secretary-general to deliver on his plans for Haiti’s cholera victims or risk tarnishing his legacy. While member states have expressed a desire to assist Haitians, many are hesitant to pledge money towards track two as it is viewed as being wrapped up in intense internal UN legal wrangling over whether to admit culpability. UN officials have taken pains to not call it “compensation”, and that word appeared neither in the documentation released today or Ban’s remarks. Throughout his speech, the secretary-general appeared to steer away from the type of language that UN lawyers fear could open the UN up to additional legal claims. “For the sake of the Haitian people, but also for the sake of the United Nations itself, we have a moral responsibility to act,” said Ban. “And we have a collective responsibility to deliver.”

The secretary-general’s change of tune was noted and welcomed by Haiti’s ambassador to the UN, Jean Wesley Cazeau. “This approach, I’m happy to highlight, represents a radical change of attitude away from the morally unjustifiable approach used until now by the UN regarding its responsibility in cases where it created or contributed to a serious health crisis by finally recognising it has a fatal [role] in the outbreak and the terrible suffering by the Haitian people,” Cazeau said. “By admitting it has a moral responsibility, the UN showed it can admit to making mistakes.” In a statement, Alston also welcomed Ban’s move to act before leaving office, but he said the secretary-general’s remarks only amounted to a “half-apology”. “He apologises that the UN has not done more to eradicate cholera, but not for causing the disease in the first place,” said Alston. “It condemns UN fund-raising to make up for its misdeeds in Haiti to a charitable operation, rather than one that is required and which must be funded.   “As a result, there remains a good chance that little or no money will be raised and that the grand new approach will remain a breakthrough on paper, but one that brings little to the victims and people of Haiti.” This summer, a US court of appeals upheld the UN’s immunity in the case of 5,000 Haitian victims who sued the UN over the outbreak. Lawyers involved in the case say they are still considering whether to bring the case to the US Supreme Court.