In Defense of Vodoun 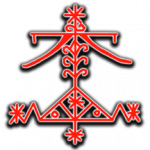 “Are you a Missionary?  What is Your Religion?”  Two common enough questions when Haitians are getting to know foreigners.  Haiti is a religious country and even the smallest villages have multiple churches if not a library or a clinic.  While every imaginable denomination has a presence in Haiti, Catholicism, Protestantism, and Vodoun form an uneasy trinity.   Haitian Vodoun is a vibrant, fascinating religion.  One need not be a Vodouisant to experience it, appreciate it, and learn from it.

What do I think of when someone mentions Haitian Vodoun?

I think of the waterfall in Saut d’Eau where pilgrims visit once a year, bathe in its waters, and purify themselves.  Hundreds of candles burn on and around the trees by the waterfall.  Even more multi-colored wish cords hang from their branches.  This is a sacred place and the pilgrimage is a celebration of life.  One goes to bed hearing the drums and one wakes up hearing them as well.

I recall how nervous I was attending my first Vodoun ceremony when I was living in the Artibonite and how much I enjoyed them after.  No one ever judged me or tried ot change how I believed.  It was enough to just be alive and aware that there is a part of every individual’s soul that is African and can be a source of strength.  It was always highly interactive with drinking, dancing, singing, and camaraderie aplenty.  During a Vodoun ceremony, you live in the moment – a sort of Caribbean zen experience.

I remember the many times I and other Peace Corps Volunteers watched RAM play at the Hotel Oloffson, infusing traditional Vodoun songs with rock music – creating innovative, exciting rhythms that appealed to Haitians and Americans alike.  I think of the RaRa bands that take over the footpaths and roads of Haiti at certain times of the year playing their manic, hypnotic music on homemade instruments – always stopping to pay their respects when they enter a crossroads.  Click here to see and hear a rara band play.

I think as well of Bois Cayman, Boukman's heartfelt prayer for freedom which sparked the Haitian revolution, and the ripple affect it had throughout the Western Hemisphere.  You can read more about Bois Cayman and Boukman's words here.

How did Haitian Vodoun come to be?  Vodoun is originally from West Africa and is  still widely practiced in countries such as Benin.  French slavers kidnapped West Africans and brought them to the island of Hispaniola.  They spoke different languages and were from different cultures.  Kreyol became the common tongue.  In time, Haiti became more valuable to the French than all thirteen American colonies were to Britain.  It was for many years the largest coffee producer in the world.  It was a lucrative economy built upon pain and suffering.

The French slavers brought Catholicism to Haiti and most would have considered themselves good Christians, as hypocritical as that strikes us today.   The one day Haitians did not have to work was on Sunday, when they would be forced to attend an obligatory Catholic mass.   Over time, the Catholic mass became a way for slaves to keep their traditional beliefs alive by drawing comparisons between Catholic saints and Vodoun spirits.

In some other French colonies, slaves had access to education.  In Haiti, greed and cruelty went hand in hand.  Haitians were treated horribly – families separated, women raped, men quite literally worked to death.  From time to time, small opportunities for revenge prevented themselves.  Slaves who knew which plants were poisonous were sometimes able to slip it into the food or water of slavers  This, and the slaveholders who keeled over dead for seemingly no reason, created a perception that slaves were capable of black magic. Perhaps this is where the seeds of stigma sorrounding Haitian Vodoun can first be found.

Other slaves tried to escape.  Those who were caught in the process were invariably tortured and killed for the attempt.  Those who did make it became an important part of the long, campaign that led to one of the greatest upsets in military history.  Haiti became the only country to have ever led a successful slave rebellion, thereby becoming the first free black republic. Haitian Vodoun has its roots in the fight against racism, slavery, and oppression.

Since Haiti’s earliest days, Catholicism and Vodoun blended together.  This is not to say that the two religions co-existed peacefully.  During the marine occupation of Haiti from 1915-1934, the longest in U.S history, the Catholic clergy collaborated with American soldiers to eliminate Vodoun.  Together, they raided peristyles (Vodoun temples) and burned drums and other artifacts.   Needless to say, the eradication campaign did not succeed.

Catholicism has since evolved and learned to live with Vodoun.  This is not to say all Catholics are completely comfortable with Vodoun.  Some are not but most accept that Vodoun is part of Haiti’s history and culture.  Any proper peristyle has images of Catholic saints, who correspond with Haitian loa (spirits).  A Catholic can attend a Vodoun ceremony without having to be less of a Catholic.  The same can’t be said of many Protestant faiths.  It was the U.S. military occupation that saw various Protestant faiths really take hold in Haiti.   It is very likely that Protestants will become the majority at some point in the future. Suffice it to say that the relationship between Protestants and Vodouisants can be tense.

Imagine a Haiti without Vodoun.  Certainly its history, and the history of the Western Hemisphere for that matter, would be much different.  Its music, art, and dance would be less vibrant.  It would be less fun.  I would miss the ceremonies, which connect one to Haiti’s past and to its African heritage. Unfortunately, a Haiti without Vodoun is the goal of many (but not all) American missionaries whose worldview does not permit them to talk to Vodouisants, attend a ceremony, or to make a good faith effort to understand.

Haitians had a strong influence on the musical and artistic culture of New Orleans.  They also brought with them Vodoun which has become a part of the city’s cultural heritage as well.   One can attend ceremonies in NYC, Boston, and Miami.  I  attended one in Silver Spring, Maryland once.  It was not the same, being indoors and rather subdued, but I appreciated that Haitians were trying to keep their traditions alive.

Members of all faiths lost homes, loved ones, and livelihoods in the earthquake.  This shared suffering brought people together for a while.  I cannot remember the last time I saw Catholic Priests, Protestant Pastors, and Vodouisants addressing an audience together the way that happened after the quake.  Now many Catholics feel they are being rhetorically attacked by Evangelicals while some Vodouisants have been literally attacked.  For example, Evangelicals attacked Voduisants during a ceremony that they were holding to honor those who died in the earthquake.  This was taken as a major offense.  The importance placed upon proper burial of the deceased for Vodouisants is akin to that by Muslims.  The Vodouisants were later able to complete their ceremony  -- under the protection of a police unit which held back the Evangelicals.   What would Jesus have done?  He wouldn’t have tried to hurt anyone, that’s for sure.

Port au Prince is a tense city right now.  Religion can be both a source of solidarity and division. Like the United States, freedom of religion is enshrined in the Haitian Constitution.  The Haitian Constitution reads “All religions and faiths shall be freely exercised. Everyone is entitled to profess his religion and practice his faith, provided the exercise of that right does not disturb law and order.”  For Haitians to not be able to practice their faith, no matter what it is, is an affront.  When an American pressures Haitians not to practice Vodoun because it does not mesh with one's religious views, it is a disservice to both the United States and to Haiti.

Why don’t Vodouisants stand up for themselves? Vodoun is decentralized to the point of being disorganized – this makes it hard to influence, advocate, and effect change.  There is no bureaucracy in place for determining who can or cannot become a Vodoun priest (Houngan) or priestess (Mambo).  Their quality varies wildly.  The clear majority serve with one hand (do only good) but there are some who serve with both hands (will do good or evil.)  But is not the Catholic priest who sleeps with a member of his congregation or a Protestant pastor that steals funds from a project not serving with both hands as well?

Vodoun has visionary leaders and also blatant charlatans. There is no Vodoun holy book, no Vodoun University and there are no Vodoun Pope or Bishops.  Catholicism and Protestantism have hierarchies but Vodoun is as grassroots as it gets.  Max Beauvoir likes to refer to himself as “Supreme Leader” of Vodoun – but who elected or appointed him?  And while I understand his frustration with the disruption of the ceremony in Port au Prince,  what right does he have to "declare war" on evangelicals in response?  Most Vodouisants I know are anti-violence.

Catholics, Protestants, and Vodouisants alike can contribute individually to the emergency response and to the long-term development of the country.  Working together, they could accomplish much more.  Imagine if every Department in Haiti had a Catholic Priest, a Protestant Pastor, and a Vodouisant working together to coordinate development activities.  As the Haitian flag states, “Unity is (makes) Strength.”  Inversely, division will weaken us and challenge our ability to overcome the massive challenges facing Haiti over the shortrt, medium, and long term.

If you would like to learn more about Vodoun, there are a number of good books and websites available.  Wade Davis provides a good introduction to Haitian Vodoun while denouncing Pat Robertson during a National Geographic interview.  Estelle Manue's Vision of Vodoun Culture Webpage is a great place to learn about prayers, songs, dances, and veves. Elizabeth Macalister has written an excellent book on RaRa called "Vodoun, Power, and Performance in Haiti and its Diaspora." Her writing on Vodoun and other topics are available here.  There is a documentary about Rara in the United States available called "The Other Side of the Water." Another way to learn about Vodoun is to hear it.  Check out a video of Azor, arguably the most famous living drummer.  RAM and Boukman Eksperyans also embrace Vodoun and their music is all the better for it.  After Carnival, Haiti XChange usually posts the best songs, much of it influenced by Vodoun.

Understanding Haiti requires knowing Vodoun as well. Experience it first person if you can.  If not, check out some of the resources available online or talk to Haitians direclty about their views and experiences.  Form your own opinions.  Please feel free to post your thoughts in the comments section below.

Note:  The photos in the blog were taken by Matt Marek.