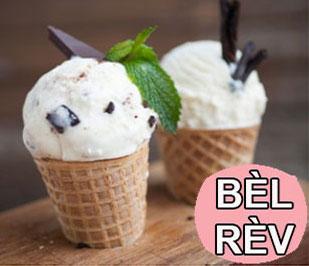 Plenty of us have dreamed about giving up corporate life to open something we love, like an ice-cream shop. Alexis Gallivan did exactly that, and after a successful run in Brooklyn, the American entrepreneur is now trying to bring her spirit of fearlessness and accomplishment to one of the most under-served populations in the world—the women of Haiti.  After working in international development for nearly a decade, Gallivan was frustrated with what she saw as a senseless divide between the private and public realms.  It seemed like a terrible waste of opportunity, one that limited the impact any one organization could actually have. In the midst of her frustration, she moved from Manhattan to Brooklyn. These were the days before the artisanal food renaissance made Brooklyn what travel blogs like to refer to as a “destination”, and the ice cream fanatic in her was disappointed to discover that there were no good scoops to be had in my her neighborhood.  She complained about it for months before deciding she should be the one to fill that hole. “I realized that filling this gap in the ice cream market was my chance to both satisfy my sweet tooth AND push for more good in the world in an entirely new and innovative way,” Gallivan said.

At a birthday party in January 2007, she was chatting about her radical ice cream business concept and caught the interest of one of her friends, Jennie Dundas.  Before long, the two women had purchased a $99 business plan template online and were on their way to launching Blue Marble Ice Cream. One week shy of nine months later, they opened the doors to their first shop and have been managing the fast and furious growth of their company ever since. One year after the opening Gallivan and Dundas launched their first ice cream social venture, Blue Marble Dreams, by partnering with a group of women in Butare, Rwanda to build Inzozi Nziza (Sweet Dreams), the town’s first-ever ice cream shop. The shop generated stable jobs for dozens of women, built demand for area farmers and stimulated commerce throughout the community. Now the two women are taking on a new challenge. They’ve moved on to Haiti, one of the poorest countries in the world, the third hungriest country on the planet and a place where the richest one percent of the population controls half of the wealth. Haiti is also a place that is notoriously difficult for foreigners to navigate, particularly when it comes to building new infrastructure and disseminating aid. We spoke with Gallivan about why they chose Haiti and how they intend to make women’s lives better through ice cream.

Jo Piazza: Why would you choose to open in Haiti? Why not somewhere a little easier?

Alexis Gallivan: Just like Rwanda, Haiti chose us.  I was leading a Q & A session, and afterwards, some women in the audience approached me.  They were originally from Haiti and explained that Port au Prince desperately needed something like what we had in Rwanda.  They recognized many parallels Rwanda’s genocide and Haiti’s earthquake.  Both were hugely traumatic events that left survivors to grapple with the daunting process of rebuilding not only the infrastructure of their countries but also the lives and spirits of their people.  They also pointed out that, like in Rwanda, there are very few jobs and training opportunities in Haiti’s formal sector, leaving many to eke out their livelihoods through subsistence farming and other hand-to-mouth occupations. The heartbreaking images from the 2010 earthquake were still fresh in our minds, and we had come to understand that the recovery process had been slow and uneven, to put it gently.  We were excited by the prospect of using an ice cream shop as a way to help nurture this process along in a modest but still meaningful way.

Piazza: How did you choose who to employe?

Gallivan: One of the factors that’s been so critical to our success in Rwanda was partnering with an established group of women who had a shared sense of purpose and built-in trust among the members.  In Rwanda, this group was the country’s first-ever all-female drumming troupe, Ingoma Nshya—which was particularly helpful because the women walked into the opportunity already disciplined, dynamic and able to work really well as a team.  The staff of Bèl Rèv is comprised largely of young women from the Fontamara neighborhood. Through their training in basic business finance, operations and culinary production, these women have been equipped to run the business proficiently, sustainably and independently. Initially, the shop will provide full-time employment to seven women, but there are plans to expand the team as the business grows. Additionally, Bèl Rèv will employ a number of supporting staff, including security guards, groundskeepers, technicians and builders.

We decided to focus primarily on women for the same reasons many other organizations do: women often have less access to opportunities in the formal sectors of the economy than men and yet are more likely to use those opportunities to advance the welfare of their families and communities.  So it was as much a moral decision as it was just plain business sense.  Also, as women business owners ourselves who have benefitted greatly from the guidance and friendship of other women entrepreneurs over the years, we felt compelled to pass this “sisterly” support along to others. Throughout our training sessions in Rwanda and Haiti, we repeatedly emphasized that we were not preparing the participants to work in an ice cream shop.  Instead, we were equipping them to run an ice cream business.  For a full year before our Haitian staff even touched the ice cream equipment, for example,  they studied the concepts and processes of business finance and operations. We wanted them to understand the intricate connections between the performance of the staff and the performance of the business, instilling in them a sense of responsibility and purpose and, hopefully, ensuring Bèl Rev’s long-term lasting success.

Piazza: How will this help women in Haiti?

Gallivan: Safe, steady jobs that pay a good wage are extremely scarce in Haiti and usually require high levels of education. This leaves most Haitians with few prospects and a lifetime of poverty.  Out of desperation, many women are drawn into relationships and occupations that jeopardize their health and safety just to meet the basic needs of their families.

Piazza: What were the challenges?

Gallivan: Where do I begin?  Haiti is an incredibly complex place.  Over the past three years of development, we experienced several lengthy project delays, most stemming from issues within the Haitian government.  In addition to the challenges of its generally serpentine and opaque bureaucracy, the country has experienced significant political instability over the last year.  On one trip, in fact, I was sequestered in my hotel because of mass demonstrations in the streets that made them impassable and unsafe.  The frequent changes in government process and personnel forced us to repeatedly build new relationships and adjust our timeline.  Further, the cost of goods and services is extremely high in Haiti in general, but the political uncertainty spurred public anxiety and inflated prices further, forcing adjustments in our initial budget.

Piazza: Did you ever want to just give up?

Gallivan: I’ll be honest. Getting Bèl Rèv off the ground has been one of the most exhausting and difficult experiences of my entire life.  With every setback (and there were MANY), I was tempted to give up and accept defeat.  But there was one story of one woman that pushed me to dig deep and keep pressing forward.  To protect her privacy, I will call her Angeline.  On the morning of January 12, 2010, Angeline was married, had two daughters and ran a small roadside stall from which she cooked and sold plantains, rice and other local staples.  Later that day, the earthquake took the life of her husband and destroyed her business and home.  Thankfully, she and her daughters survived.  Shortly after, with nowhere else to go, they were living in one of Port au Prince’s notorious “tent cities.”  With no lights, no proper sanitation, inadequate shelter, scant food and mass emotional trauma, the living conditions were dangerously unstable.  One night, Angeline was attacked by a group of men.  They sexually assaulted her, and one man stabbed her in the side of her chest. But despite the challenges, Angeline was always the first to arrive at our training sessions and the last to leave.  She struggled with some of the material, but that never stopped her from trying (and smiling).  And whatever she lacked in technical skill was more than compensated for with her leadership, her ebullience and her commitment.  Not surprisingly, she was selected as one of Bèl Rev’s starting staff line-up and is sure to be one of our stars.