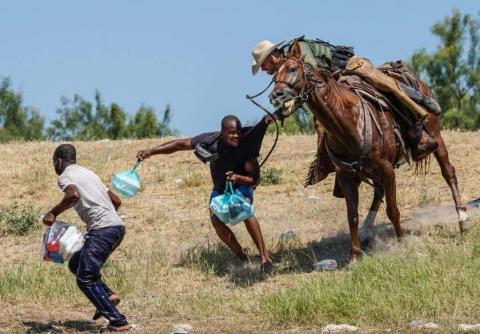 MIAMI — The viral images of border agents on horseback rounding up migrants on the Texas line over the weekend triggered disturbing memories for Marleine Bastien. As an immigrant from Haiti in the early 1980s, she had watched similar encounters with law enforcement at the Miami federal detention center, where she protested fellow Haitian immigrants being locked up or deported while Cuban refugees were released. Miami police would show up “on big horses trying to trample” demonstrators to break up the crowds. Now, 40 years later, “history is repeating itself,” she said.

Uproar over treatment of thousands of Haitian immigrants who have encamped at the U.S.-Mexico border is echoing from the streets of U.S. cities to the halls of the Capitol as people mobilize over what they believe is a racist and unequal U.S. immigration system. While the outcry was sparked by the current border crisis, it is a culmination of years of frustration over what is perceived as harsher treatment and extra hurdles faced by Black immigrants coming to the United States vs. lighter-skinned counterparts.  “This is cruel, un-American and inarticulable,” said Bastien, executive director of the Miami-based Family Action Network Movement, which advocates for immigrant causes. “I am getting so many calls from people asking why? What have Haitians ever done to America? All we have done is try to help America, and we are treated like this?”

Why are there thousands of Haitian migrants at the Texas border?  On Tuesday, about 200 Haitian Americans shut down a major thoroughfare in Miami as they demonstrated in front of a U.S. Citizenship and Immigration Services field office. Demonstrators held signs that read “End Racism at the Border” and “Treat All the People the Same” while chanting “Let them breathe,” an effort to link the squalid conditions migrants are facing to George Floyd’s infamous final words before he was killed by a Minneapolis police officer last year. Nana Gyamfi, the daughter of Ghanaian immigrants and executive director of Black Alliance for Just Immigration (BAJI), has long spoken out about what she called “two levels of discrimination” — for being immigrants, and for being Black.  “Black migrants are disproportionately being criminalized just as African Americans are because of their Blackness,” Gyamfi said. “Our Blackness leads us to be racially profiled and puts us in the police-to-deportation pipeline.” She said the proof that the handling of the Haitian asylum seekers — from being charged at by Border Patrol agents on horseback to their mass deportations, many in shackles — is a product of anti-Black racism is clear in the comparison with how Afghan refugees have been received in recent weeks.  “One group is being met with food, cheers, places to live, etc. — which is what welcoming looks like. And the other group is being met with cowboys with leather straps or ropes and detention by force,” Gyamfi said.

For decades, many Haitian Americans say, they have felt that Black asylum seekers have not been granted the same chance as other groups, a feeling that has only intensified in recent weeks amid bipartisan calls for the United States to admit more refugees from Afghanistan. Many in the Haitian American community also blame U.S. foreign policy for spurring Haiti’s humanitarian crisis, saying successive administrations have failed to nurture stable Haitian governments willing to embrace human rights and fight corruption, poverty and criminal gangs.

Civil rights leaders said they are appalled — not only by the rough treatment of Haitian migrants by U.S. border agents, which they say harks back to dark times in U.S. history, but by the administration's continued efforts to use a public health order to deport them during a pandemic. In a sign of the sensitivities surrounding race, a trio of White House officials — all of whom are Black — met with nine members of the Congressional Black Caucus on Wednesday to talk about the situation in Del Rio, Tex., where the migrants have gathered.

In an interview after the White House meeting, Rep. Barbara Lee (D-Calif.) said she urged the officials to halt deportations of Haitian migrants. “We know the administration heard us and, in fact, they understand these issues very well,” she said. In addition to protests, Bastien and other activists say the level of anger within the Haitian American community is so intense that some residents have been marching into county offices to sever their affiliation with affiliation with the Democratic Party and registering as independents. Bastien said her own brother, who also lives in Miami, told her Tuesday that he plans to leave the Democratic Party this week. “The betrayal is deep, and this week has shown that the Democratic Party, and its leader Joe Biden, does not care about Black people,” said Leonie Hermantin, an activist who works with the Haitian Neighborhood Center in Miami, where many refugees initially go for services when they arrive in South Florida. “Black lives do matter, even at the border.”

Fewer than 5,000 migrants remained in the Del Rio camp Wednesday, down from a peak of more than 15,000, according to Department of Homeland Security officials. DHS Secretary Alejandro Mayorkas said Monday the that camp would be emptied within 10 days, but department officials have not said how many migrants they plan to send back to Haiti and how many are likely to be released into the United States and afforded a chance to seek humanitarian protection under U.S. law. Authorities sent three more planeloads of returnees to Haiti on Wednesday and have sent 12 since the Biden administration announced it would ramp up the return flights, part of an effort to deter more border-crossers from coming.

Haitians make up one of the largest Caribbean immigrant populations in the United States, after Cubans, Dominicans and Jamaicans, according to census data. And roughly two-thirds of the Haitian immigrant community is concentrated in Florida — where a neighborhood of Miami has long been known as Little Haiti — and in New York. Nearly a quarter-million live in the Miami-Fort Lauderdale metro area. The Haitian immigrant community in the United States grew in just under four decades from 92,000 in 1980 to 687,000 in 2018, according to an analysis of census data by the Migration Policy Institute, a pro-immigration think tank. Immigration experts say the current flow represents one of the largest waves of Haitian migrants to the United States since the 1990s, fueled by a mix of desperate circumstances, economic pressures and U.S. policy.

Haiti has been plagued by decades of political upheaval, exacerbated by natural disasters and epidemics. And remittances sent home by the Haitian diaspora makes up more than a third of the country’s gross domestic product. The brutal, three-decade-long dictatorship of the Duvaliers fueled some of the first major waves of Haitian refugees and migrants to the United States. The 2010 earthquake also devastated the island nation, killing hundreds of thousands of people and displacing 1.5 million, and prompted the U.S. government to extend temporary protected status (TPS) to Haitians, thereby temporarily shielding undocumented Haitian immigrants from deportation. Earlier this month, the Biden administration extended TPS benefits by 15 months to Haitians, Nicaraguans and Hondurans in the United States, which immigration analysts say might have also spurred false hopes among newly arriving migrants they would be granted leniency to stay.

BAJI, which was formed to address the intersection of racial justice and immigration rights, has sent a letter to the Biden administration with other Black leaders demanding that the Haitians be granted humanitarian parole or asylum. Gyamfi, the BAJI executive director, said they’re also demanding that the administration incorporate the racial equity executive order it signed on Biden’s first day in office into immigration policy. “There’s this tendency to marginalize those people who don’t have big numbers,” she said of the Black immigrant population. “But as the experience of African Americans teach us, you don’t have to have big numbers to have big impact, and you don’t have to have big numbers to deserve to be free.”

In Miami, Haitian Americans say they have felt especially marginalized compared with Cuban Americans, who for generations have been had a faster path to American residency. Haitian Americans say that disparate treatment has allowed Cuban Americans in South Florida to more quickly accumulate wealth and political power.  “In the ’70s and ’80s, there were both Cubans and Haitians arriving [in Florida] at the same time by boat, and they were treated very differently,” said Muzaffar Chishti, director of the Migration Policy Institute’s office at New York University School of Law. “Haitians were denied asylum, while Cubans were granted green cards. . . . The fact Cubans were not Black made it stark.”

The policy affected a “huge decline” in the number of Haitians reaching the United States, he said. In 1981, there were about 1,000 Haitians arriving per month, he said. By 1982, the monthly arrivals had dropped to below 200. “All we are asking for is due process,” said Santra Denis, 36, founder of Avanse Ansam, a Miami-based group of millennial South Florida Haitian Americans. “We know that is the case for some, but for us, that has never felt like the case.”

Nick Miroff and Abigail Hauslohner contributed to this report.