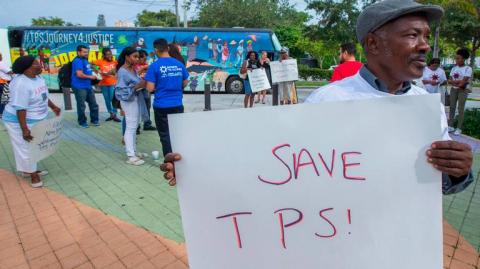 The Biden administration is granting a new 18-month designation of Temporary Protected Status to Haiti, a significant move that alleviates the threat of deportation for thousands of Haitians and recognizes that conditions are so dire in their turmoil plagued homeland, they cannot safely return. Department of Homeland Security Secretary Alejandro Mayorkas announced the decision Saturday amid Haiti’s deepening political and constitutional crisis and a spike in COVID-19 cases. The temporary humanitarian protections, he said, will be extended to eligible Haitians living in the United States as of Friday. This includes upwards of 60,000 Haitians who were already benefiting from the protected status, but had been living under fear of deportation amid an attempt by the Trump administration to terminate the program, and thousands of recently arrived Haitian immigrants who lacked the protected status. “Haiti is currently experiencing serious security concerns, social unrest, an increase in human rights abuses, crippling poverty, and lack of basic resources, which are exacerbated by the COVID-19 pandemic,” said Mayorkas. “After careful consideration, we determined that we must do what we can to support Haitian nationals in the United States until conditions in Haiti improve so they may safely return home.”

Under TPS, foreign nationals are allowed to temporarily live and work in the United States if U.S. authorities determine that conditions in their country of origin are too dangerous to a return. Human rights and immigration activists have been calling on the Biden administration to continue with the protected status for Haiti and to recognize Haiti’s worsening conditions by redesignating the country to allow a broader group of people from being sent back. The Biden administration’s decision could benefit more than 100,000 Haitians, immigration activists say. The decision was welcomed by Haitian community leaders, immigration rights activist and U.S. lawmakers, who have written letters, staged rallies and called on the president to issue the new designation. Haiti’s current TPS status, they told the administration, was endangered by lawsuits filed against the Trump administration after it tried to terminate the program and Haitians lived in fear of being sent back to their homeland.

The decision brings a great deal of relief to Haitians in communities across the U.S. who have built families, businesses and new lives. "This is what we have been asking for and fighting for, and now the recognition is there,” said U.S. Rep. Frederica Wilson, D-Florida, who hand-delivered a letter to President Joe Biden with the re-designation request during a recent meeting. She and other Haiti supporters in Congress have called on the administration for a change in U.S.-Haiti policy, and tougher stance against the country’s unpopular president, Jovenel Moïse, who has been ruling by decree and is pushing a controversial June 27 referendum on a new Haitian constitution.

Wilson noted that the decision comes at a time when Haiti is overwhelmed by multiple crises, “and every bit of financial and other assistance that TPS recipients can send to their families who are fighting to survive during this tumultuous period is sorely needed.”  “It is my sincere hope that the extension will ultimately lead to a more permanent solution and will continue to push for the passage of legislation introduced by a bipartisan group of lawmakers and me to provide a pathway for certain nationals who received TPS before January 13, 2011, to adjust their status to Legal Permanent Resident,” Wilson said. “In addition, I am calling for President Biden to appoint a special envoy to Haiti to address the nation’s political turmoil and bolster Haitian-led solutions to help charter a path back to democratic rule.”

U.S. Sen. Bob Menendez, D-N.J., who wrote to Biden along with Florida Republican Sen. Marco Rubio requesting a new TPS designation, also welcomed the news. "The last thing our country should be doing is forcing an entire community in the U.S. to decide between packing up their lives and tearing their families apart by self-deporting, or becoming undocumented and forced into the shadows of our society,” Menendez said. “All one needs to do is take a look at the conditions on the ground in Haiti to understand why today’s announcement to issue a new TPS designation will avoid destabilizing the island’s fragile recovery efforts and keep approximately 150,000 individuals from harm’s way.”

For months, Haitian and community activists have been mounting pressure on Biden, who during the campaign promised to halt deportations to Haiti for 100 days. Instead, what has unfolded is the deportation of thousands of Haitians under the public health law known as Title 42. Invoked by the Trump administration, it’s been used as grounds to expel Haitians and other migrants arriving at the U.S.-Mexico border during the COVID-19 pandemic.

Haitian community activist Marleine Bastien said she is elated about the TPS news. She was among a crowd of Haitians who marched in Washington on May 18, Haitian Flag Day, demanding that the Biden administration stop supporting Moïse and redesignate TPS for Haiti. Bastien’s Family Action Network Movement separately sponsored a protest outside of the Broward Transitional Center, an immigration facility, in Pompano Beach that same day, calling on the administration to protect Haitians from deportations.“I am glad that he heeded the voices of a strong bi-partisan group of lawmakers in the House and the U.S Senate , in addition to thousands who took to the streets throughout the U.S. on May 18 to decry the grave human rights violations in Haiti today, his apparent support for the government of Haiti and an illegal referendum, and his inaction on TPS redesignation,” Bastien said, referring to Biden. “Over 100,000 families and their children will finally have a good night’s sleep tonight and this is priceless.”

The Obama administration first granted the protected status to Haiti in 2010 to shield Haitians from deportation after a massive earthquake devastated their homeland on Jan. 12 of that year, killing more than 300,000 people and leaving 1.5 million homeless. In 2011, Haiti’s designation was extended, and the country was also redesignated for TPS. Haiti’s designation was subsequently extended again for 18 months in 2013 and 2015, and for an additional six months in 2017. In January 2018, a Federal Register notice announced termination of Haiti’s TPS designation as of July 22, 2019, by the Trump administration as part of its effort to tighten immigration restrictions. The decision, the administration said at the time, was based on improved conditions in Haiti, a determination that activists and human rights lawyers challenged in several federal lawsuits.

Those lawsuits are ongoing, with two judges issuing injunctions to protect Haitians from being deported. Immigration lawyer Ira Kurzban, who is defending TPS in one of the lawsuits, believes Saturday’s decision will resolve the TPS litigation. “It’s an extraordinarily positive step by the administration for the Haitian community. It means Biden has lived up to his promises to the Haitian community. The administration should be applauded for taking this correct initiative given the conditions in Haiti,” Kurzban said.

Homeland Security said the decision on Haiti’s redesignation was taken after consultation with the State Department and reflects extraordinary temporary conditions in Haiti that prevent nationals from returning safely --a political crisis and human rights abuses, serious security concerns and the COVID-19 pandemic’s exacerbation of a dire economic situation that includes lack of access to food, water and healthcare. The persistent effects of the 2010 earthquake have also exacerbated conditions in Haiti. A country may be designated for TPS based on one or more of the three statutory grounds for designation: ongoing armed conflict, environmental disasters, or extraordinary and temporary conditions. DHS warned that Haitians who attempt to travel to the United States after Saturday’s announcement will not be eligible for TPS and may be repatriated.