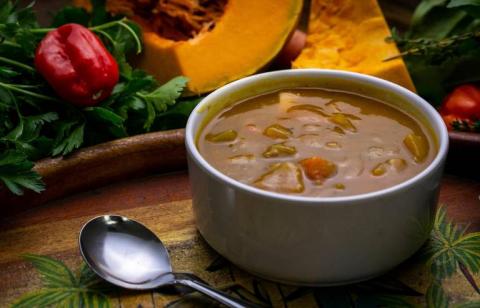 Soup joumou, or pumpkin soup, is typically eaten on Jan. 1 or Sundays. But Haiti’s ambassador to UNESCO says it should be recognized as a cultural contribution to humanity. BY JOSÉ A. IGLESIAS  Few things unite Haitians more than savoring a bowl of soup joumou, the pumpkin-heavy dish hailed as a symbol of national identity and freedom.vNow it may also achieve distinction on the international stage as UNESCO weighs whether to add it to a list of traditions considered intangible cultural heritage of humanity.vSteeped in history, the Scotch bonnet chili pepper and thyme-fused soup is held up by Haitians as a reminder of the bloody revolt their ancestors, enslaved Africans, staged against French colonizers, making Haiti the first Black-led republic in the world.v“It is the first meal shared between the first Black people of the world,” said Dominique Dupuy, Haiti’s new ambassador to the world’s leading cultural organization. “The added value to this list is undeniable.”

Dominique Dupuy, Haiti’s ambassador to UNESCO, signing the candidacy of soup joumou on Thursday, March 25 in Paris, France for inclusion on the list of Intangible Cultural Heritage of Humanity. Courtesy of Dominique Dupuy
The application — Haiti’s first-ever submission —was submitted Thursday at a moment when the nation finds itself in the midst of deep political and social turmoil, and as Haitians, struggling with questions about their destiny as a people, find themselves grasping for good news. While Haiti does have a UNESCO-recognized World Heritage site — the National History Park in the northern city of Milot comprised of several 19th century ruins and buildings, including the mountaintop Citadelle fortress — most were unaware there was an intangible cultural heritage list until world spread that couscous had been added. That sparked a lively debate, with Haitians speculating online over which of their own national dishes should be included, with many advocating for soup joumou.

For Dupuy, the dialogue brought a moment of deep introspection. “Soup joumou bridges Haitians within Haiti, it bridges us with Africa, it bridges us with a future where we can have hope,” said Dupuy, who while watching the debate unfold said she had the urge to scream, “Hold on, this is coming.” With its eclectic mix of African, Taino, European and Arab influences, Haiti could have proposed any number of cultural traditions to showcase its contributions to humanity. But making UNESCO’s list isn’t about having the best or most unique item. It’s about showing that your cultural tradition is part of a dialogue among humanity. For Haitians, consuming soup joumou more than any other dish is an assertion of what unites them. “I wager you to find any other element that can harness so much consensus,” Dupuy said about the one pot dish that combines West African and New World ingredients, as well as elements of French cooking. “Everyone has a different opinion on every cultural element in Haiti. But soup joumou unites all Haitians.”

Grown across the Caribbean, the squash known as calabaza in Latin America, and used to make soup joumou, is not your typical pumpkin. It was cultivated by slaves, but they were forbidden from eating it. After defeating Napolean Bonaparte’s army, Jean-Jacques Dessalines, a former slave-turned founding father, declared the Africans of Saint-Domingue free on January 1, 1804. “Finding the absolute truth on the origin of the soup is not essential,” said Dupuy, who credits Dessalines’ wife, Marie Claire Heureuse Felicite Bonheur Dessalines, with encouraging Haitians to celebrate their independence by drinking the soup once only reserved for their French masters. “What’s important is acknowledgment of the fact that it’s part of the national psyche and that this mystical element creates this identity fiber throughout Haiti.”

Few things unite Haitians more than savoring a bowl of soup joumou. The pumpkin-heavy stew is hailed as a symbol of national identity pride​ and freedom. Thyme is one of the ingredients that help five the soup flavor. To show this, the Haiti delegation, is providing hand-written and typed notes from over 50 farmers, women’s groups and cultural organizations explaining why the celebratory dish is a quintessential cultural element of their national identity. They also provided a video, with footage from communities enjoying the soup, and other documentation about the soup’s history, preparation and consumption handed down over generations.

Teams of trained university students fanned out across Haiti’s 10 regions speaking with Haitians about why they eat the soup. During the visits, they conducted interviews with those who harvest the calabaza, to those who sell and cook it. They also made observations about how the soup is prepared and consumed in communities across Haiti. In the Grand Anse, for example, students found that people like their soup with yams, a vegetable native to Africa. In the grain growing Artibonite Valley, they add rice and in Port-au-Prince, the capital, they like to stick to tradition by serving the soup every Sunday, not just on Jan. 1.

The same can be observed in the Haitian diaspora, where the dish not only symbolizes equality, but the evolution of a people. While some prefer the traditional recipes, where every ingredient is distinguishable and garlic and parsley are still crushed in a wooden mortar, others have taken to blending everything together. “When people come here and I tell them I have soup joumou, they say ‘It’s not Sunday. It’s not January 1,’” said chef Jerry Dominique, who serves up a vegetarian version at his KC Healthy Cooking in North Miami. “I tell them, ‘For me, I need to celebrate my independence day, everyday. It’s a reminder of where I am from and how far we’ve fought.’”

Chef Creole restaurant owner Wilkinson ‘‘Ken’‘ Sejour also has his own spin on the soup, which he reserves for Jan. 1 and catering menus. Along with his secret sauce, which provides even more of a kick, Sejour is known for replacing hearty portions of beef with crab, shrimp, lobster and conch. “More so than the flavor, it’s saying to people, ‘Hey remember us, our legacy,’ ” he said. “It is literally an education piece in history.” The soup is not an everyday meal, nor one to be enjoyed alone. It is something to be shared, the knowledge of how it is made usually passed down from mother to daughter, without any written instructions. Though a culinary item, the soup’s taste has no value for UNESCO, which cares more about the dish’s societal resonance.

After being nominated as Haiti’s UNESCO ambassador, Dupuy began thinking about the soup, long before the debate erupted in December, deciding that one of her goals would be to submit something from Haiti to the cultural heritage list. She settled on soup joumou after coming to the realization that when asked, “How do you feel Haitian?” the answer is usually, “When eating soup.” The animated debate in Haiti after couscous was added to the heritage list reinforced her decision. “It was like getting a free poll, nationwide and internationally, to say ‘We made the right choice,’” she said.

Soon after, the Ministry of Culture recognized soup joumou as part of Haiti’s national heritage, a step that was required in order for UNESCO to consider adding it to their list. Other ideas have followed, including a petition to have Konpa Direct, the country’s national dance music, which until recently was not on Haiti’s cultural registry, recognized as well. But that process is more complex.

Since arriving in Paris in January, Dupuy has been lobbying diplomats involved in what is, by all accounts, a highly political selection, where some ambassadors frown on contributions with religious connotations and steer clear of commercial goods. The organization will only receive 55 applications a year and countries aren’t told when that number has been reached. Winners aren’t announced until December.If the intensive process has taught her anything, Dupuy said, it’s to step out of her comfort zone when it comes to the soup, and try it in different settings. Like many Haitians, her relationship with the soup and its meaning has evolved, especially after she became a mother nearly three years ago. “At six months, she started having her first soup joumou,” Dupuy said. “Every Sunday for the first year of her life. I have 52 pictures of her eating her soup joumou.

“It’s one of the strongest things that unites me to any Haitian where I may find them,” she added. “Just like as Haitians we can’t trace back how this became so huge, I can only say that from birth, this was important for my family, this was something that was crucial and my parents and I always had soup together as a family.” Wherever it originated from, there is one indisputable fact: The symbolic value of the soup can be seen every Jan. 1 as Haitians, whether at home or abroad, welcome a new year, going from one house to another, enjoying the soup and celebrating the birth of Haiti as a sovereign and free nation. “With the social-political turmoil, we are building walls around each other, and I think that soup can be a very powerful way to break down these walls,” Dupuy said. “The fact you have this ode to freedom, this unwavering faith in a better tomorrow, togetherness and the fact that it tastes good, is to me the trifecta.”