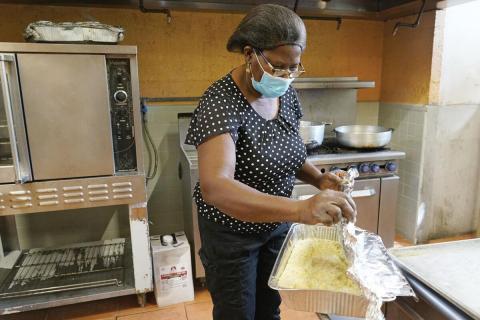 Doramise Moreau toils long past midnight in her tiny kitchen every Friday – boiling lemon peels, crushing fragrant garlic and onion into a spice blend she rubs onto chicken and turkey, and cooking the dried beans that accompany the yellow rice she’ll deliver to a Miami church. She’s single-handedly cooked 1,000 meals a week since the pandemic’s start, an act of love she’s content to perform with little compensation. Moreau, a 60-year-old widow who lives with her children, nephew and three grandchildren, cooks in the kitchen of a home built by Habitat for Humanity in 2017. Her days are arduous. She works part-time as a janitor at a technical school, walking or taking the bus. But the work of her heart, the reason she rises each morning, is feeding the hungry.

As a little girl in Haiti, she often pilfered food from her parents’ pantry – some dried rice and beans, maybe an onion or an ear of corn – to give to someone who needed it. “Sometimes when you’re looking at people in their face, they don’t need to ask you,” she explained. “You can see they need something.”  Moreau’s mother would get furious, constantly scolding and threatening her daughter, even telling the priest to refuse to give her communion. But Moreau was not deterred.  I told her, ‘You can whup me today, you can whup me tomorrow, but I’m going to continue to do it,’” she said.

Decades later, Moreau is still feeding the hungry. She borrows the church truck to buy groceries on Thursday and Friday and cooks into the wee hours of the night for Saturday’s meals. Notre Dame d’Haiti Catholic Church pays for the food, relying on donations to do so. Moreau prepares the meals on her own while church volunteers serve or deliver them to shut-ins. “Americans, Spanish, Haitian, they come here,” Moreau said. “Even when I’m closing, they say, ‘Please, can I have some,’ and I give it to them, because if they go home and have nothing it hurts my feelings.” She also feeds people back in her little village north of Port-au-Prince. Despite a meager salary, Moreau sends food pallets monthly to her sisters and brother, nieces, nephews and neighbors, telling her sister over the phone to make sure this person gets a bag of rice and that person gets the sardines.

Every morning before work, for the church’s staff, police and local community leaders, Moreau prepares a table with a special Haitian hot tea to ward off colds. She lays out vapors to inhale and other remedies from her homeland believed to strengthen the immune system. “She takes care of everybody from A to Z,” said Reginald Jean-Mary, pastor at the church. “She’s a true servant. She goes beyond the scope of work to be a presence of hope and compassion for others.” A few years ago when the church couldn’t afford to hire a cleaning crew, Moreau offered to do it for a negligible sum. She does it with a cheerful heart.

And until recently, she’s done it all without a car. But last month, Moreau was surprised with a new Toyota Corolla topped with a big red bow. As part of a local anti-poverty initiative, community leaders nominate residents known for community service to receive a vehicle. The Martin Luther King Economic Development Corporation purchases the cars wholesale through a grant, and recipients like Moreau pay $125 a month for three years and then they own it.

With her janitorial job and all her work at the church, people often ask her if she’s exhausted. But she says she is fueled by her faith. “I can keep all the money for myself and never give anyone a penny,” Moreau said. “But if you give from your heart and never think about yourself, God will provide for you every day. The refrigerator will never be without food.”