US Steps Up Deportation Flights to Haiti 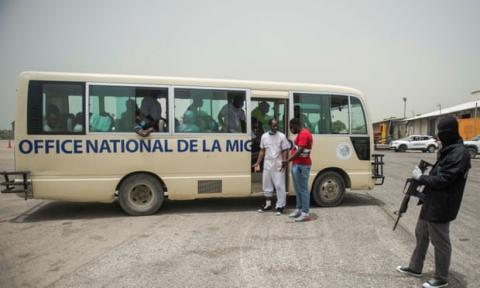 US steps up deportation of Haitians ahead of election, raising Covid fears

US immigration authorities have radically stepped up deportation flights to Haiti in the weeks before the election, raising concerns over returned migrants’ safety on their return home and the risks of spreading coronavirus in the impoverished Caribbean state.  Twelve flights to Haiti have been recorded so far in October, marking a steep increase from previous months when there were on average between one and two flights every four weeks. Most of the Haitian migrants have been summarily expelled under a 1944 public health law, which lawyers and refugee rights advocates say is being abused by the Trump administration to sidestep its legal obligations to give migrants the opportunity to apply for asylum and other internationally guaranteed rights.

Some of the Haitians deported in recent weeks have been asylum seekers who had been taken from detention centres in what administration critics say is a rush to expel Black immigrants from Africa and the Caribbean ahead of the election. The Haitian flights coincide with the forced repatriation of scores of Cameroonian, Congolese and other African asylum – seekers, many of whom were flown out while they had legal cases pending. “I believe that they are trying to deport as many people as possible prior to the elections,” said Guerline Jozef, the president of the Haitian Bridge Alliance (HBA), an immigrant advocacy and support group. “Once they arrive back in Haiti, they are just left to fend for themselves.”

Jozef said some of the deported migrants had been fleeing the political and gang violence that has become widespread across Haiti in recent years, and would be risking their lives to return to their homes.  The deportation flights also raise the potential for the spread of coronavirus in Haiti. Under government guidelines, illegal immigrants are supposed to be detained in ways that keep them socially distanced and tested before being put on flights. “Since the start of the pandemic, US Immigration and Customs Enforcement (Ice) has taken significant measures to mitigate the spread of Covid-19, including screening for symptoms and increased testing for many of those scheduled for removal,” an Ice statement said. “The health, welfare and safety of Ice detainees is one of the agency’s highest priorities.”

Jozef said social distancing had been abandoned because of a recent flood of Haitian immigrants and it was unclear whether Covid-19 tests had been actually been carried out. “Many of the people upon arrival in country ended up having coronavirus and bringing it with them,” she said. “And the majority of them are families with babies, and children that are a few months old, two years old, three years old, eight years old. It’s just absolutely unbelievable.” “There’s so much chaos and disorder in Haiti right now that there’s no infrastructure, economically or socially for reintegration of these families that are coming back in,” Nicole Phillips, HBA’s legal director and adjunct professor at University of California Hastings College of the Law.

Phillips cited the case of a recent returnee who had been driven out of her village by political violence and since deportation had been forced to go into hiding. The collapse of the Haitian economy following a devastating 2010 earthquake has led to the crumbling of democratic governance, the disintegration of law and order and the rise of politically affiliated gangs. Haitians fleeing the violence have typically flown to Brazil or Chile and then made the arduous and highly dangerous trek through South and Central America which can take months. Several thousands have camped in Mexico since the procedures for applying for asylum were suspended because of the pandemic.

In October there appears to have been a surge of illegal crossings by Haitians of the Rio Grande. The US border patrol in Del Rio has reported that since the beginning of the month 450 Haitians had been apprehended in their sector. They have been deported under Title 42, a previously obscure clause of the 1944 Public Health Services Law which has been used by the Trump administration since March this year to expel more than 200,000 migrants. The law, which gives the government the power to take emergency action to prevent “introduction of communicable diseases” was officially authorised by the Centers for Disease Control and Prevention (CDC).

It is reported to have been enforced on the insistence of the White House over the objections of CDC health experts who said there was no public health reason to use it. Stephen Miller, a close aide to Donald Trump, and the administration’s most fervent anti-immigration advocated, is said to have insisted on it. It has been used to expel “certain persons” who are defined as traveling by land from Mexico and Canada, without valid travel documents. The only justification on health grounds for the use of Title 42 is that those targeted would have been crowded into “congregate settings”, and therefore were prone to the spread of disease.

But legal critics of the procedure have pointed out that the migrants have been packed together by the US border patrol and Ice agents, making Title 42 a self-fulfilling means of deporting targeted immigrants and sidestepping the provisions of the 1980 Refugee Act, the Convention Against Torture and the Immigration and Nationality Act, which give the right to apply for asylum, protection against torture and against repatriation to countries where a migrant’s life could be in danger. “What is clear is that Trump has used Covid-19 to do what courts had previously denied him: blocking asylum, even for people already on US soil,” said Tom Ricker, a programme associate at the Quixote Center, a social justice pressure group.