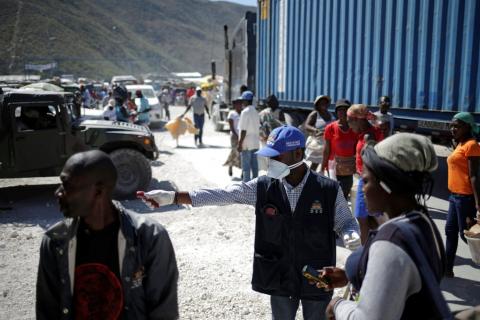 As the coronavirus spreads across Latin America and the Caribbean, public health officials are flagging outbreaks cropping up in several border regions, particularly the one between Haiti and the Dominican Republic.  The Pan American Health Organization said on Tuesday that it was focusing its efforts in these rural frontier areas, where populations are on the move and medical facilities are lacking. Indigenous people and migrants, vulnerable under normal circumstances, face even greater risks now.  “The increase of transmission in these areas is cause for serious concern and immediate action,” Dr. Carissa F. Etienne, the director of the P.A.H.O., said.

In addition to the Haiti and the Dominican Republic, Dr. Etienne cited spikes in other border areas, including the one between Costa Rica and Nicaragua and the Amazon region that Brazil shares with its neighbors.  The Dominican Republic has seen a large outbreak of the coronavirus with 23,686 total cases, according to a New York Times database, and 615 deaths. Haiti has reported 4,441 cases and 76 deaths. Many Haitians live and work in the Dominican Republic, but after the outbreak there, thousands lost their jobs and moved back to Haiti. Some may have brought the virus with them.

According to the International Organization of Migration, there were more than 278,000 border crossings from March 17 to June 7, with a total of 51,000 going to Haiti, an unusually high number, according to Giuseppe Loprete, the I.O.M.’s chief of mission in Haiti. He added that the weekly average of 4,000 crossings is about double the normal figure. Dr. Etienne said that many migrants are day laborers or work in the so-called informal economy, without access to housing or protections against losing their jobs. She said they were not only among the most vulnerable, but also the least likely to have access to health care. The overall number of cases in the Americas has risen to 3.8 million with almost 204,000 deaths, Dr. Etienne said. Fifty-four percent of those cases were reported in the United States and 21 percent in Brazil. Dr. Etienne said the P.A.H.O. has worked to put in effect more robust safety and surveillance measures in these frontier areas.

The P.A.H.O. has established screening and quarantine centers at border crossings in the region; the organization also provides training, equipment and staff to supplement local medical services that can often be overwhelmed in the small border towns. She noted that these remote areas often lack adequate medical facilities and struggle to provide essential tools in the fight against the coronavirus, like testing and surveillance. For many migrants, the stigma associated with the disease has made some of those safeguards, like contact tracing, even more difficult. Mr. Loprete said that many people returning to Haiti leave inaccurate contact numbers because they do not want community members to treat them as sick.

“The stigma is high,” he said. Dr. Jean William Pape, who is a co-head of a presidential commission to fight the virus in Haiti, said there were 269 points of entry into Haiti from the Dominican Republic and only four formal border check points, making screening, quarantines and treatment especially difficult. He said that in Haiti, 80 percent of the initial reported cases were in the West of the country, but now they are seeing cases all over. He is heartened that there have not been as many deaths as might have been expected. But he thinks the number could be even lower. He said that misinformation spread on social media has dissuaded infected people with symptoms from seeking health, fearful that they will be injected with a fictitious vaccine that could kill them. “It is very disturbing,” Dr. Pape said. “There are young people waiting six days with severe breathing problems before they come in. If these people come to in sooner, we can save them.”