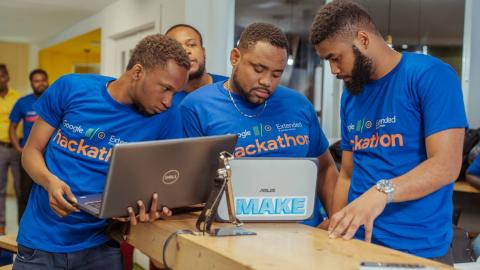 Local web coders in Haiti participate in a hackathon at Banj, a tech startup in Port-au-Prince, in April.  When Google developers gather in Silicon Valley on Tuesday to hear about the company’s latest projects, thousands of miles away in Haiti hundreds of budding software developers will be tuning in.  For the first time, digital marketers, web coders and entrepreneurs in Haiti’s small but emerging tech community will get a chance to follow the Google I/O Developers conference, which is being live-streamed to them at the Karibe hotel in Port-au-Prince. About 600 local developers and entrepreneurs have signed up for Google I/O Extended Port-au-Prince, which will be followed by workshops and training sessions on web development and artificial intelligence. And all of it will be conducted in Creole.

The one-day event is being organized by a group of Google employees of Haitian descent, said Naisha Silva, Google program manager for emerging markets and one of the organizers, who spent her early childhood in Haiti. “We are over 50 Haitians and friends of Haiti around the world who have created a community within the company, and are working toward building a bridge between the company’s resources and Haiti’s startup ecosystem,” Silva said. “Haiti is a part of our identity, and we’d like to engage in its development while working for one of the most resourced and innovative companies in the world.”  The initiative is part of a growing trend in Haiti, where internet penetration, now at 19 percent according to data by Hootsuite, is on the rise. Digicel, a leading telecommunications company in the Caribbean, says it counts about 2 million smartphone users among its clientele. Last year, Haitian President Jovenel Moïse announced the first national incubator for entrepreneurs, Alpha Haiti, in downtown Port-au-Prince.

Haiti, with its 11 million residents and young population, very much remains a pen-and-paper society, with lawmakers for years refusing to adopt an electronic signature law to reduce the time it takes to create a company out of fear of technology. And while the country recently joined the growing Airbnb community, Haitian consumers and those who would benefit from employment outside of the country, for example, still have no way to receive money or make purchases through online payment sites like Paypal because banks have not made the switch.  But such realities don’t seem to be stopping tech-savvy Haitians from trying to come up with the next tech outfit in the country, or from taking advantage of the growing number of technology conferences every year, like Haïti Numérique, DevXpo and Haiti Tech Summit.

While Haïti Numérique showcases different technologies with its annual digital forum, the tech summit has focused on giving Haitians a chance to hear from global social entrepreneurs and startup innovators like Twitter co-founder and CEO Jack Dorsey and venture capitalist Ben Horowitz. An investor in Airbnb and Facebook, Horowitz spoke at the first tech summit in 2017 and will be back when the summit takes place June 20-22. “It is incredibly inspiring to see the commitment of the Haitian diaspora... leveraging technology to build opportunities for the next generation back home and partnering with locals to do it,” said Marc Alain Boucicault the founder of tech-based hub Banj in Haiti.

Boucicault , who organized the DevXpo conference with support from Facebook’s global Developer Circles program, has also collaborated with Haiti Tech Summit and the Google team. In the walk-up to Tuesday, the team hosted a hackathon at Banj, where Haitian entrepreneurs were challenged to create a job-creating app. The winner will be announced on Tuesday during the Google I/O event in Port-au-Prince and will receive $5,000 to implement the idea with the support of a local incubator. The prize money, Silva said, is being sponsored by Hope for Haiti, a nonprofit that focuses on seed funding for entrepreneurs in the south of Haiti. “I know its an uphill battle,” she said. “But for the few it really impacts it’s worth it to see where they might take it.”