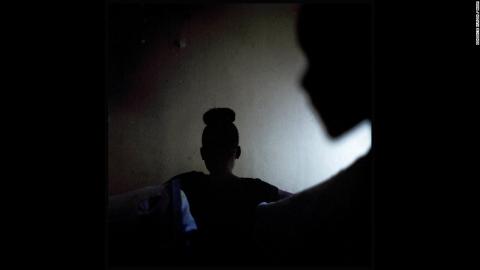 Gisele stands behind a tall plant with vibrant pink flowers. Her face is hidden, her hands are raised toward the sky. Marie sits in a riverbed while her white dress floats in the water. You can see the goosebumps on her skin. Viviane lies in a patch of sun with a journal resting on her face. Each portrait exhibits a quiet beauty. They're intimate and serene. But the elements that make up these portraits are derived from a dark source: Each woman lived through sexual assault. Photojournalist Benedicte Kurzen traveled to Port-au-Prince, Haiti, to document the largely unseen crisis of sexual assault in the country. While working in Nigeria, Kurzen went to a camp where a woman had just been freed after eight months in Boko Haram captivity. The woman was heavily traumatized and Kurzen chose not to take pictures, but she knew it was an issue she wanted to explore. Soon after, an opportunity arose with the nonprofit group Médecins Sans Frontières, also known as Doctors Without Borders, to work with rape survivors in Haiti. "This work is the result in collaboration with MSF," Kurzen said. "They were very helpful. They identified women and young girls who had been raped a year ago. It wasn't fresh. It was important not to victimize them a second time." The earthquake in 2010 displaced 1.5 million people who were forced to move into post-quake camps that offer little safety. As of March 2015, more than 60,000 people still live in these camps. These precarious living conditions and lack of protections leave women and children especially vulnerable to sexual assault. MSF runs the Pran Men'm clinic in Port-au-Prince, which provides emergency medical assistance in the critical 72 hours after an assault, as well as long-term medical and psychological care. According to the organization's 2015 International Activity Report, more than a third of the clinic's 258 patients were under 18 years old. Kurzen spent three weeks in Port-au-Prince getting to know her subjects. "Every photograph was taken after a very long interview," she said. "I spent a really long time explaining to them what it was about and why we wanted to do this. My position was, 'We need your help to keep awareness about what happened to you.' International funding was drying out."

A psychologist was present for each interview as the women and girls told the story of their rape. "We talked about how they wanted to be pictured," Kurzen said. "It was very collaborative. All the pictures are inspired by elements of their story that they shared with me or by their own desire." Kurzen paid careful attention to detail in order to keep the women and girls she was photographing comfortable. She shot the portraits on a medium format camera because she felt it was more discreet, less noisy and allowed her subjects to see her face at all times. The face of each survivor is obscured and their names were changed for their protection. There is a heavy stigma for women who have been raped in Haiti, she said, and resources are scarce. Abortion is illegal, further limiting their options. "It puts women in a terrible position," Kurzen said. Kurzen's portraits allow each woman to define herself as separate from her assault. "(The portraits are) more an homage to their resilience than about rape itself," she said. "In general when we speak about rape I usually have this feeling that we as media have a tendency to portray women as rape survivors and that's all they are. We put them in a box and reinforce some kind of stigma. We don't explore their imagination." Marie, for example, wanted to be photographed as someone doing laundry while in traditional dress. She told Kurzen there are things she wants to do with her life -- study, write and become a journalist. This was a chance for her to wash away her assault and move on.

Benedicte Kurzen is a French photographer based in Johannesburg. She is represented by Noor.