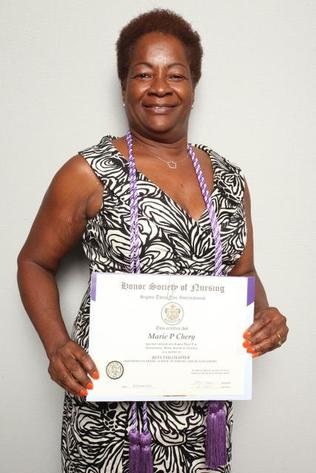 The road to better quality of life and improved healthcare in Haiti’s Central Plateau is a long, arduous one. And no one knew it better than humanitarian activist and research nurse Marie Elia Chery.  When Chery first started organizing and setting up mobile clinics for Haiti’s poorest of the poor as part of the University of Miami’s Project Medishare initiative, she had to frequently make the six-hour trip from Port-Au-Prince to Thomonde, Medishare’s headquarters, to stock up on medical supplies and equipment. In one of the handful of vans the organization had at its disposal, Chery crossed two mountain ranges and a river valley, dodging boulders and mud holes, on a dirt road that Project Medishare co-founder Arthur Fournier called “arguably the world’s worst road.”

But Chery knew the treacherous trip was only a small price to pay for the chance to make a difference in her compatriots’ lives. “It was like we had our own Mother Theresa — but probably more organized,” said Fournier, a retired professor at the University of Miami Miller School of Medicine. Chery, who had devoted 11 years of her life to helping Haitians fight sickness and illness, died suddenly March 4 in Miami after an “extremely brief illness.” She was 59. The desire to aid and educate others was engrained in her family’s fabric. “Her mother was actually the director of nursing at the state nursing school in Port-Au-Prince,” Fournier said.

Chery followed in her mother’s footsteps and left her hometown to attend the City College of New York where she earned her bachelor’s degree in science in 1977. Chery then moved to Miami to work at the University of Miami as a research nurse, and eventually taught as an adjunct professor at the School of Nursing. Her work with Project Medishare began in 2000 when she volunteered and took a trip to Central Plateau with Fournier. “The Central Plateau is the most isolated part of Haiti and that’s where her heart was,” said Project Medishare president and co-founder Dr. Barth Green. Chery and other volunteers would go to churches and schools to set up mobile clinics. “You can’t expect people to travel,” Fournier said. “You have to bring medical care to them.”

And so Cherry organized medical care centers, staffing them with a Haitian workforce and continually educating helpers and patients alike. Often times working without running water, and until recently, without electricity, Chery’s dedication was tireless and, in time, paid off. Prenatal visits went from zero to an average of three per pregnancy, Fournier said. Much of it thanks to Chery’s efforts. “Miss Marie,” as she was affectionately called by her patients, grew the workforce of nurses, pharmacists and community health workers to more than 100 employees who now deliver healthcare to over 100,000 Haitians in three isolated rural communities.

In 2010, when a devastating earthquake rocked the Caribbean nation and destroyed her house, Chery evacuated a team of nursing students who were marooned in the Central Plateau and then assisted in setting up a field hospital near the airport. Later that year when a Cholera outbreak erupted in the Artibonite Valley, Chery set up treatment units and organized the distribution of chlorine. She also educated the native population about cholera prevention. “She was a fierce defender of the Haitian people,” Green said. “Marie was all about empowering the people.” When Project Medishare treated people for free after the earthquake, Chery approached Green and told him that they had to charge patients at least a few gourdes to prevent native doctors and nurses from leaving the country and avoid a collapse of the local healthcare system. She became the organization’s country director that same year. “We became the good guys over there because of her,” Green said. “She was our teacher.” Both Green and Fournier agreed that with all Chery did, she did it without fanfare. “She didn’t ever want recognition,” Green said, adding that Chery was honored by UM’s School of Nursing in December when she was inducted into Sigma Theta Tau, the International Honor Society of Nursing. “She was a giant of a person even though she was only 5-4,” Green said.

Chery is survived by her son and daughter-in-law, her sister, and her two grandchildren. A viewing will be held from 6 to 10 p.m. Friday at Fred Hunter’s University Drive Home at 2401 S. University Dr., Davie. The family asks that in lieu of flowers, donations can be made to Project Medishare at www.projectmedishare.org.