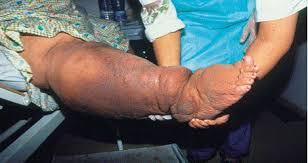 Simple and direct as that is, the Division of Parasitic Diseases and Malaria’s Dr. Pat Lammie is convinced it’s the key to eliminating lymphatic filariasis (LF) in Haiti.  Like any good CDC expert, Lammie has data to support his position. Years of collaboration among CDC, USAID, RTI, IMA World Health, the University of Notre Dame, and the Bill and Melinda Gates Foundation (BMGF), along with country partners, have led to legitimate optimism that this devastating but persistent parasitic infection can be eliminated. CDC has provided key technical assistance while USAID and BMGF provided critical funding. Lammie emphasized that the focus on research, testing, surveillance, and mass drug administration (MDA) have been key in eliminating LF in Haiti.

Haiti is one of only four countries in the Americas where people suffering from LF can still be found. It’s a mosquito-borne parasitic infection commonly called "elephantiasis" that prevents people from living full and productive lives. You don’t have to be a doctor to recognize why. The disease lives up to that description, causing legs, arm, feet and genitalia to swell, and in some cases, to enormous, painful dimensions. There is a clear link between poverty and LF, and Haiti has the highest poverty rate, poorest health indicators, and greatest burden of LF in the Western Hemisphere.

The LF program in Haiti has faced many challenges, including chronic political instability, hurricanes, the ongoing recovery from the devastating earthquake in 2010, and a deadly cholera outbreak following the earthquake. Despite these challenges, CDC and its partners have remained determined and dedicated to eliminating LF in Haiti.  CDC has spent more than 15 years developing treatment strategies and diagnostic tools for LF before the global MDA program even started. Using these in the field gave numerous staff an opportunity to learn first-hand about treatment, surveillance, and MDA. Haiti was the base for CDC’s years of research, and it was a logical choice to have LF elimination efforts targeted there. The strategy to eliminate LF is based on annual MDA with a combination of two drugs, both donated to support the global effort.

Research has been, and remains, the key to eliminating LF in Haiti.  A rapid diagnostic test was developed to determine who was infected with LF. Prior to this test being available, testing had to be done at night to get an accurate measure of the infection level in the blood. The healthcare workers who came to collect the blood samples were called ‘loup garous’ (werewolves). Although CDC didn’t develop the rapid diagnostic test, it has used it extensively throughout Haiti to test individuals to determine their infection levels. (Much better than having a ‘loup garou’ at your door at night.) Before the MDA started, up to 50% of children were infected in some areas of the country. Following the earthquake, CDC partnered with the Ministry of Health and the University of Notre Dame to begin MDA to treat LF in Port-au-Prince in 2011 and 2012, and more than 2.5 million people were treated in the first round.

As with much of CDC’s work, providing the medication involved much more than simply finding patients and offering treatment. The MDA strategy included informing communities, collecting information from sentinel sites, training volunteers for MDA, mobilizing sufficient numbers of people to participate in MDA to prevent transmission, maintaining MDA for four to six years, and, finally, determining when MDA can be stopped.

CDC funding was key to ensuring that all areas of Haiti were under treatment. An effective delivery strategy was established and more than eight million people were treated each year. To scale down MDA, CDC provided support to the Ministry and partners to conduct surveys to gather data on transmission after MDA. Success was measured as the absence of infection in children. The WHO-recommended transmission assessment survey that CDC helped to develop uses a pass/fail method after MDA to indicate whether there was infection in children and whether MDA can be stopped. By 2017, MDA treatments will have decreased to about two million people as more areas of the country achieve a successful stopping point. As an added benefit of the LF MDA, hookworm infection has also decreased by 90%.

"The key challenge," Lammie said, "is how do you know where it’s safe to stop?"’ He reiterated that research has played a key role in developing guidelines for countries to determine where to stop, and that maintaining LF elimination is a big challenge. Validation of newly developed diagnostic tools and methodologies for using these tools will help to provide the rigor needed to demonstrate the success of the program. As the Haiti LF elimination program enters the last mile, continuing research into new interventions will culminate in better tools and continuing advances in eliminating LF worldwide. "Commitment equals success" means the finish line is in sight for LF elimination in Haiti.