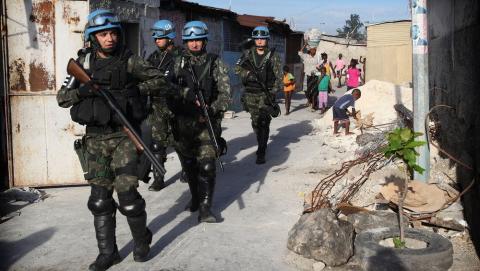 A landmark legal decision has been made in a Haitian court, ordering a former UN peacekeeper from Uruguay to pay child support to a woman he impregnated in 2011.  The court in the coastal town of Jacmel recently announced the decision after its judgement in late December, Sandra Wisner, a senior attorney for the Boston-based Institute for Justice and Democracy in Haiti, told The New Humanitarian.   The group has been working with the Haitian-based Bureau des Avocats Internationaux (BAI) to represent several Haitian women who were impregnated and abandoned by UN peacekeepers. The BAI initiated claims on behalf of 10 Haitian women in 2017.   “The BAI child support cases against UN peacekeepers are among the first of their kind worldwide, and to our knowledge this was the first ruling like this in Haiti,” Wisner said.   “The verdict marks an important first step towards justice for our client and the many other women and children affected by exploitation and abuse,” the lawyer said, noting that the case may help other courts around the world push such claims forward.

The UN confirmed the paternity in this case in 2014, Wisner said. It wasn’t immediately clear whether the man was still serving with the UN.  Hundreds of children are thought to have been fathered by UN peacekeepers during the UN’s stabilisation mission, known as MINUSTAH, according to a study that interviewed some 2,500 people in Haiti – the poorest country in the western hemisphere. The mission, which began after President Jean-Bertrand Aristide was ousted from power in 2004, and was extended until 2017 due to waves of political instability and natural disasters, was mired in controversy.

A deadly cholera outbreak linked to UN peacekeepers from Nepal killed 10,000 people shortly after the 2010 earthquake that killed between 100,000 and 300,000. Peacekeepers were also accused in a number of sex abuse scandals, including a child sex ring that forced a contingent of Sri Lankan peacekeepers home.    Justice has been slow for the women. Paternity claims have stalled in Haitian courts because the UN has failed to “certify the non-applicability of functional immunity in violation of the UN/Haiti Status of Forces Agreement” – essentially maintaining that the troops’ behaviour fell outside their duties – Wisner said. “Our team now looks ahead to international enforcement while also continuing efforts on the other cases currently in local courts,” Wisner said, noting that enforcement of the child support order would take the cooperation of the Haitian government, as well as Uruguay and the UN.

UN peacekeepers have been accused of fathering children worldwide, often leaving women to fend for themselves and facing stigma from their communities. Some of the children have been allegedly born out of rape to underage girls.  Many member states have refused to take DNA from troops, making it even more difficult to file paternity claims once peacekeepers leave their missions.    The UN has maintained that it has a “zero tolerance policy” on sexual abuse and exploitation, but such paternity cases – as well as sex abuse – persist. It took former UN secretary-general Ban Ki-Moon six years to apologise for the cholera outbreak, noting the UN’s role but not admitting culpability. Much like the paternity cases, families of cholera victims are still waiting for the UN to consider damages claims.