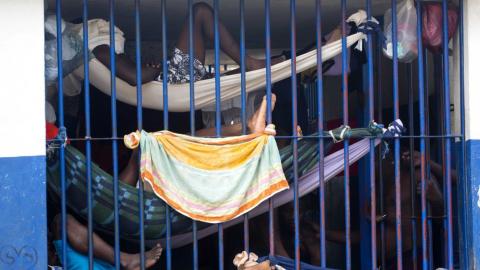 By EVENS SANON and DÁNICA COTO

PORT-AU-PRINCE, Haiti -- A warning from a well-known judge in Haiti crackled recently over the radio: “Don’t let them arrest you, because you don’t know when you will be released from prison.” Haiti’s justice system has long been dysfunctional. But in recent years delayed judicial appointments, a spike in violence and protests by judges and court clerks demanding higher salaries and better working conditions have overwhelmed a system in which some 80% of inmates are being held with no trial amid a rise in what activists say are illegal and arbitrary preventive detentions. “These conditions are so unacceptable that they constitute a violation of the prohibition of cruel, inhumane and degrading treatment,” the United Nations Integrated Office in Haiti said in a statement this week.

Overall, some 11,000 inmates are being held in prisons across Haiti, including the National Penitentiary in the capital of Port-au-Prince, which was built for 800 prisoners but holds an estimated 3,800. “The system is on its knees,” said Marie-Yolène Gilles, executive director of the human rights group Fondasyon Je Klere. “It has been crippled for a year now.” Those concerns were echoed by Judge Jean Wilner Morin last month during a radio news program in which he warned that people should avoid being arrested as he talked about Haiti's problems, including the troubles in the justice system.

On a recent afternoon, more than a dozen people stood outside the National Penitentiary, colorful plastic bags lying at their feet holding food for their loved ones inside. Lina André had traveled for more than an hour to see her boyfriend, who has been incarcerated for 10 years but hasn’t seen a judge since he was arrested on suspicion of killing a man. “I hope the system will work one day and people won’t have to suffer,” she said. Haiti is among the top 10 countries in the world most affected by prolonged pretrial detention, with people often imprisoned for more than a decade as they await a judicial hearing, according to the U.N.

Activists expect the situation to worsen, given the increase in violence and protests and a decree that President Jovenel Moïse recently approved that classifies certain crimes as terrorism, including robbery, arson and blocking public roads, common events during protests. During a hearing last month held by the Inter-American Commission on Human Rights of the Organization of American States, attorney Sonel Jean-François said Haiti’s Court of First Instance and Court of Appeals have not functioned properly for the past two years because proceedings are often interrupted by a powerful armed gang that operates in the area around the courthouse. “This constitutes a violation of the victims’ right to justice and of the detainees’ right to be tried within a reasonable time,” he said.

It’s not uncommon to hear shootings in the courthouse area that force government employees to go home early, said Magistrate Yvenne Tibeau, a deputy government prosecutor. He said there has been no security at the courts for a year. Tibeau joined a group of judges who went on strike last year after Monferrier Dorval, a well-respected lawyer and head of the bar association in Port-au-Prince, was fatally shot at his home. While the case remains unsolved and Tibeau has since returned to work, he still worries about his safety and said the government has not responded to his repeated requests for a police escort. Court proceedings also have been interrupted by strikes as court clerks demand better conditions and higher pay. The majority of them earn roughly $270 a month. “Whenever we have a strike, we know it hurts the inmates that have to come to court,” said Elysée Cadet, leader of a clerks union. “Not just the inmates; it damages the process of the system. But this is the only way for authorities to hear our voice.” The strikes are consequential, Judge Bernard Saint-Vil said. “The minute a clerk is absent, the whole system fails.”

The lack of judges also contributes to a backlog in cases, he said, noting that some 40 judges once worked at Haiti’s main courthouse, compared with the 25 there now. Brian Concannon, an adviser for the Institute for Justice and Democracy in Haiti, said not appointing judges results in fewer voices ruling against the government and sends a message to current judges that their terms won't be renewed unless they fall in line with Moïse's administration.

It also has the effect of politicizing the judiciary, with well-known cases involving crimes against humanity and high-ranking officials being stalled while those of few resources and power await trial in detention, said Alexandra Filippova, a senior attorney at the institute. Proposed solutions have ranged from freeing inmates held beyond the time prescribed by law to increasing the justice system’s limited budget. Jean-François, the lawyer, said more money for judges would translate into less corruption and fewer strikes. In mid-January, the U.N. met with USAID and Haitian authorities to relaunch certain initiatives and agree on ways to reboot the judicial system and limit the number of people taken into custody. In its statement, the U.N. noted that similar efforts previously ended in “resounding failures.”