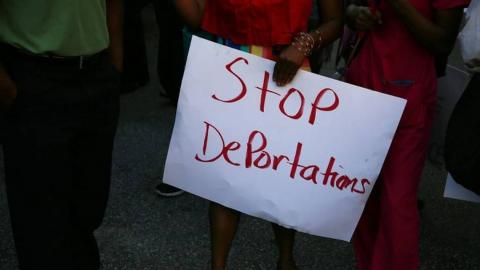 They are as young as one, two, and three years old, the children who are scheduled to be deported, along with their families, to Haiti on Monday. Their names are on a May 11 U.S. Immigration and Customs Enforcement deportation flight manifest -- ICE AIR -- that also includes death squad leader Emmanuel “Toto” Constant, who once admitted on “60 Minutes” that he was working for the CIA while running a brutal paramilitary organization, which was responsible for the torture and murders of thousands of Haitians. After it was revealed that Constant’s name was on the manifest, he was removed from the flight, according to a report by the Miami Herald.  Constant’s attempted deportation, along with the increased frequency of these flights, during a global pandemic, of which the United States is the epicenter, shows how, under the guise of immigration enforcement, the United States can further destabilize Haiti, both by inserting new players into its current political powder keg and by increasing the chances that COVID-19 could ravage a country that is scarcely prepared for it.

Whether or not Constant will be deported at a later date remains unclear. However, for those who are still on this flight, including families with very young children, these deportations are cruel, reckless, unconscionable and despicable, as was recently expressed by the editorial boards of the Miami Herald, The Boston Globe and The Washington Post, in response to other deportation flights last month. Three out of the 61 men, women and children who were deported to Haiti on an April 7 flight tested positive for COVID-19, at a time when the country had only 25 laboratory-confirmed cases. The Ministry of Public Health is currently reporting 151 confirmed cases and 12 deaths; however, given the country’s limited testing capacity, the numbers could be higher.  Coming from overcrowded U.S. detention centers, where social distancing is impossible and where detainees’ health often is neglected, many of those who are being deported have had multiple exposures at various facilities with known cases, according to their lawyers, and family members. While ICE has announced that it would increase testing, particularly before deportations, the wife of one COVID-19 positive man -- who is one of five on the May 11 manifest who have tested positive for the virus -- told me that her husband was only tested after showing symptoms, which is consistent with what other lawyers and family members have said.

Asymptomatic deportees could also be spreading the virus to others on these flights or upon their return to Haiti, where the Haitian government quarantines deportees in a few hotels, which had been set aside for locals. With each deportation flight, the U.S. government is denying already limited quarantine space to COVID-19 positive Haitians who, like the majority of the population, cannot self isolate or socially distance at home. With these deportation flights, the United States is also exporting the coronavirus to a country whose overall infrastructure and already minimal public-health system have barely recovered from the earthquake of Jan. 12, 2010, that nearly destroyed the capital and killed more than 300,000 people and from the cholera epidemic, introduced by U.N. peacekeepers, that killed 10,000 and infected close to a million Haitians.  At the same time that it’s contributing to the spread of the virus to Haiti and elsewhere, the Trump administration has instituted travel bans and has stopped issuing green cards, essentially closing its borders in order to “slow the spread.” The administration has also threatened to impose visa sanctions on countries that refuse to accept deportees or that delay deportations during the pandemic.

More than 100 Immigrants’ rights organizations, faith-based groups, academic institutions across the United States and Haiti, have sent a letter to the Trump administration, the Department of Homeland Security and ICE, urging them to stop the deportations and find community-based alternatives to detention that are consistent with current public-health protocols on COVID-19. The administration should heed their call. The medical humanitarian organization, Doctors Without Borders, has also sounded the alarm in a recent statement, warning that the deportations are “moving people from the epicenter of the COVID-19 pandemic to countries with lower rates of transmission and will exacerbate a public-health crisis in the region.” Even with this administration’s expressed “America First” focus, it’s hard to imagine how an escalating health crisis involving the spread of a highly communicable and deadly virus, and the potential of tens of thousands of deaths in America’s “back yard” could ultimately shield Americans from the virus.

The Pan American Health Organization cautioned that a large-scale outbreak of the global pandemic could lead to a medical as well as a humanitarian crisis in Haiti. With these ongoing deportations, The Trump administration, the Department of Homeland Security and ICE, are not just endangering the lives of the men, women and children on these flights, they are also potentially condemning entire communities to death.

Edwidge Danticat is a Haitian-American writer living in Miami.