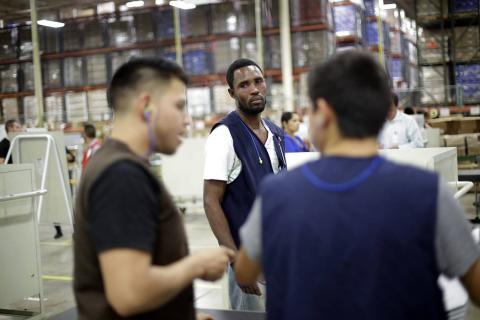 TIJUANA, Mexico — Jose Luis Millan found a new crop of star employees at an upscale Tijuana car wash where customers cross the border from the U.S. to pay up to $950 to have their prized possessions steamed and scrubbed for hours. They’re never late, always hustle and come in on days off to learn new skills, traits that he says make them a model for their Mexican counterparts. They are among several thousand Haitians who came to Mexico’s northwest corner hoping to cross the border before the U.S. abruptly closed its doors last year. The Mexican government has welcomed them with visas that help them fill the need for labor in Tijuana’s growing economy. In a country whose population is 1 percent black, Tijuana’s Haitians stand out. They share tight living quarters, sending much of their meager wages to support family in Haiti. Haitians earn far less than they would in the United States but enough to forsake the risk of getting deported by heading north. Two new Haitian restaurants downtown serve dishes with mangoes and mashed plantains. Dozens of Haitian children attend public schools. Factories that export to the U.S. recruit Haitians, who can also be found waiting tables and worshipping at congregations that added services in Creole. “It’s the Mexican dream for many of them, a sense that they belong,” Millan said. “Mexico has given them opportunity. Mexico has opened up and let them achieve their dreams.”

Millan, who lived in the Los Angeles area for two decades until he was forced to leave last year for employing dozens of people illegally at his party planning company, sees parallels to Mexicans in the U.S. Their teamwork sets an example. Some customers ask for them. Haitians, he says, “fight hard, fight strong, and they don’t stop.” The Haitians took an accidental route from their impoverished Caribbean homeland to Tijuana, a city of about 2 million that borders San Diego and also has large pockets of Chinese and Korean immigrants. Brazil and its neighbors took in the Haitians after that country’s 2010 earthquake. As construction jobs for the 2016 Summer Olympics ended and Brazil descended into political turmoil, they crossed 10 countries by plane, boat, bus and on foot to San Diego, where U.S. authorities let them in on humanitarian grounds.

Then President Barack Obama shifted course in September and started deporting Haitian arrivals. Many decided to call Mexico home. After struggling as a schoolteacher in Haiti, Abelson Etienne moved to Brazil in 2014 to work at a factory that made cable for lighting products. He arrived in Tijuana in December after a harrowing journey with his wife who, despite the U.S. policy shift, was allowed in on humanitarian grounds, presumably because she was seven months’ pregnant. Etienne, a 27-year-old who studied chemistry in college in Haiti, settled into a routine of six-day weeks and three double shifts, earning him 1,900 pesos (a little over $100), mostly for his wife in New York City and the infant son he hasn’t seen. On Sundays, he sleeps until the afternoon and goes to church. “There’s so much work in Tijuana,” he said while a pot of fish stew with mangoes and tomatoes simmered on an electric burner in the two-room apartment that he rents with three other Haitians. “I’ve been treated very well in Mexico.”

Like its neighbor to the north and many other places in Latin America, Mexico has a complicated history with race. Mexico’s elites tend to be white-skinned, and black people are sometimes casually demeaned, even in everyday phrases such as “trabaja como un negro,” meaning “to work like a black,” or work hard. The Mexican government is giving Haitians one-year, renewable visas that allow them to work but not bring family. Rodulfo Figueroa, the region’s top immigration official, says Mexico is practicing what it asks of the U.S. and other countries. “We believe that there’s a humanitarian case to be made for these people to find better lives in Mexico,” said Figueroa, the National Migration Institute’s delegate in Baja California state, which includes Tijuana. “Our policy is to have the Haitian population do what they need to do to have status in Mexico.”

The new arrivals, currently numbering around 3,000, are manageable in a country of 122 million. Central Americans, who come illegally in much larger numbers, are typically deported, although Mexico is granting asylum more often. Rodin St. Surin, 36, is among hundreds of Haitians who found work at Tijuana’s export-oriented factories. CCL Industries Inc., a Toronto-based company that makes Avery office products for retailers including Staples, Wal-Mart, Target and others, needed help after moving manufacturing from Meridian, Mississippi, last year. The plant hired St. Surin and 15 other Haitians in May for its workforce of 1,700 during peak back-to-school season. They inspected and packaged binders at the back of a giant, spotless floor where machines also churn out labels, folders and markers around the clock. Plant managers overcame language barriers by having St. Surin translate their directives to Creole. Some Haitians have quickly learned Spanish in Tijuana, while others got a head start from time spent in Spanish-speaking parts of the Caribbean and South America.

“I’m very comfortable with these people,” said Mario Aguirre, the plant’s operations director and a 43-year industry veteran. “They have given us very good results. They don’t miss work, they always arrive on time. We’d like to see the same attitude in everyone.” The factory offered 1,500 pesos (about $85) for a six-day week, with health coverage, paid vacation and a free shuttle to work. St. Surin, who left Brazil with hopes of joining a cousin in Miami, sends earnings to a caretaker for his three children in Haiti, whom he hopes to bring to Tijuana. “Mexico could become my home,” he said outside a crowded, graffiti-covered building where a nun allows about 50 Haitians to live rent-free on a street shared by cars and stray dogs. They tap a neighbor’s hose for water to bathe, and cook meals on a campfire under a large canopy.

The Ambassadors of Jesus Church, which sits on a rugged dirt road lined by agave and used tires, housed up to 500 Haitians last year on floors strewn with mattresses, making it perhaps the largest religious or civic aid group. Its pastor, Jeccene Thimote, wants to build a “Little Haiti” of 100 houses nearby at the bottom of a canyon where the sound of peacocks and roosters and smell of pigs permeate the air. He built three houses before the city halted construction for lack of flood controls. Thimote, 32, survives on two hours’ sleep, rising to pray at 5 a.m., serving as foreman for a crew of 10 Haitians building a house in one of Tijuana’s wealthiest neighborhoods, and working the night shift at RSI Home Products Inc., a California-based company that makes cabinetry for The Home Depot and Lowe’s.

Thimote, who was among 160 Haitians still living rent-free at the church this summer, sends his earnings to Haiti to settle family debts and support a 3-year-old daughter. He hoped to join a cousin in New York when he left Ecuador last year, but considers Mexico better than Haiti, saying, “There’s more poverty there than here.” The church has adapted. Every Wednesday night, Haitians gather for a rousing sermon in Creole. Mexicans attend a Sunday service in Spanish. A Haitian and Mexican recently announced plans to marry at the church.