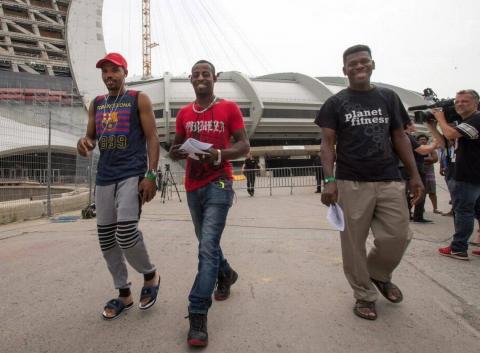 Haitians are increasingly seeking asylum in Canada for fear of being deported when a six month Temporary Protected Status extension concludes on January 22nd .  According to the Miami Herald copied below, the Montreal City Council estimates that half of the 6,500 asylum seekers arriving since January are Haitian.  In the United States, civil society groups continue to advocate for another extension. The uncertainty is difficult for individuals and families who know that their opportunites to work and study will be extremely limited if they are deported.  The Candadian response has been both competent and compassionate.  Asylum seekers are being housed, their basic needs met, and they are safe.  For more information on the response from a Canadian perspective, take a look this Global and Mail op-ed by Ratna Omdivar as well.

BY JACQUELINE CHARLES AND HAROLD ISAAC

Worried that the door to freedom is closing in the United States under President Donald Trump, Haitians are flocking to Canada to seek asylum. “According to my sources: 2,500 new arrivals in July (U.S. border refugees),” Montreal Mayor Denis Coderre tweeted in French on Wednesday. Canadian immigration officials weren’t able to say how many of the refugees making the border crossing from northern New York into Quebec are Haitian. But Frantz Benjamin, the Haiti-born chairman of the Montreal City Council, believes at least half of the estimated 6,500 asylum seekers that have arrived since January are Haitians prompted by Trump’s hardline on immigration. The number also includes individuals from several Muslim-majority nations banned by Trump. “It’s clear for us that the new politic of Donald Trump, the new president of the United States, has created a panic that today has a lot of people believing that their future isn’t in the United States and by ‘any means necessary,’ they will get to Canada,” Benjamin said. “But we want to make it clear, Canadian law hasn’t changed.”

Observers say the surge in Haitian asylum seekers coincides with the Trump administration’s decision in May to grant Haitians only a six-month extension of Temporary Protected Status, or TPS, when it expired on July 22. The special immigration status, given to Haiti after its devastating Jan. 12, 2010 earthquake, has allowed 58,000 Haitians to legally work and live in the United States without fear of deportation. In announcing the decision, John Kelly — then secretary of the Department of Homeland Security, now White House chief of staff — said he would revisit Haiti’s TPS designation ahead of the new Jan. 22 expiration date to determine if another extension is warranted, but Haitians should prepare to return home.

David Lapan, a spokesman for the Department of Homeland Security, said the agency “has not made any decision about the future status of TPS for Haiti.” Haiti's president and foreign minister have said in separate statements that they received assurances from U.S. officials that TPS will be renewed. But Lapan said Thursday, “There is no deal.” That uncertainty has fueled a panic among Haitians, who are choosing to pack their bags and cross the U.S.-Canada border, said Marleine Bastien, a Miami Haitian rights activist. “Haitian families are in an impossible situation,” she said. “On the one hand, they’ve been living here, they made a life here, they are part of the American society. And yet when they apply for TPS extension, they are receiving this letter asking them to basically pack their bags. … They know that Haiti is still recovering and it’s impossible for them to return. They are panicking and making this decision not to wait to be deported like criminals.” Still, Bastien doesn’t condone the move — at least those with TPS. She said they have now traded in their legal status for one of undocumented refugee. “Even if they obtain political asylum, it’s a long process at which time they will remain undocumented,” Bastien said. “Here, they are legal at least until January 2018 … We are still fighting for an extension. The administration has not said they will not renew. They should stay and fight.” A coalition of immigrant support organizations launched a national campaign in Miami Monday to call for the temporary immigration protection of the Haitian and Central American community, known as TPS, to be maintained.

Benjamin, the Canadian official, said he believes Haitian asylum seekers are also being misled by false information on social media networks and unscrupulous individuals telling them that Canada is offering residency and will legalize those who lack permanent legal resident status in the U.S. “There is a way to enter Canada,” he said, adding that about half of the Haitians who sought refuge in Canada after the 2010 earthquake have since been returned to Haiti. Still, for TPS holders, Canada is worth the risk. “Haiti has nothing to offer,” said a beneficiary who declined to give his name, fearing it would jeopardize his chances of remaining in Canada. “It’s the last place we would want to go.”

Alva Pierre, a 31-year-old Haitian mother who crossed the border from New York with her young son on July 27, said the reception in Canada has been as different as day and night compared to the United States. Coderre, an immigration official before being elected as mayor of Montreal, welcomed the new arrivals in French and Creole. On Thursday, Pierre said, another official visited migrants at the stadium. “They welcome you,” she said of Canadian officials. “In the U.S., you aren’t working and no one ever asks you anything. Here, it’s something totally different. Once you arrive the people know that you have to live, you have to function and they try to find a way to make that happen.”

Pierre, who didn’t have TPS, said she arrived in the U.S. in January from Brazil, which opened its doors to Haitians after the earthquake. She made the dangerous 7,000-mile journey across South and Central America to get to the U.S. in hopes of a better life. But after arriving in California, she was detained by U.S. immigration officials, then temporarily released and moved to New York. With no legal status and facing deportation back to Haiti, she decided to take her chances in Canada, traveling by bus seven hours from New York with her son. “Everyone knows how things are in the United States with Trump,” she said, “so everyone is looking for a place to put themselves. I think this is the reason why we all have come here.” Asked why she would not return to Haiti, she shook her head. “Oh my God,” Pierre said, “the only thing we are hearing about Haiti at this moment is bad news. … I don’t see any reason for anyone to return to Haiti now because the people who are in Haiti are complaining. We are already here and we’re here to stay.”

Pierre said Haitians are ending up in Montreal after hearing reports from people who made the trip successfully. Canadian immigration officials and a spokeswoman for PRAIDA, a government-funded immigrant-support program in Quebec, say they cannot say how many of the refugees seeking asylum are Haitian. But they’ve been “observing this situation for months and working on different scenarios,” said Emmanuelle Pacullo, the PRAIDA spokeswoman. One scenario involved opening a network of 10 shelters in the province of Quebec, including setting up cots inside Montreal’s gigantic Olympic Stadium. “There is no crisis per se,” Pacullo insisted, adding, however, that the daily arrivals have created “an extra amount of work. But we are doing well.”

On Thursday, as more migrants began to arrive, officials who had already set up 150 cots in the stadium’s vast corridors where soccer and baseball fans usually walk to their seats, were told to make room for more. “We are right now looking at the possibility of doing so for 600,” said Cedric Essiminy, stadium spokesman. “It’s the first time there are people using the stadium as a shelter in 40 years of existence.” Essiminy said stadium officials received the request to use it as a makeshift shelter on Friday. Within 24 hours, they had identified a place to set up the 150 cots. And while the refugees don’t have private rooms, he said, they have everything they need. “They have water, they have shelter, they have bedsheets. Showers available to them. WiFi because they make research, they call their relatives,” he said. “They have food and they have people who take care of them, asking them if they are OK. There is a also a nurse who comes to see who is OK and who needs special service. It’s rudimentary but it’s functional.”