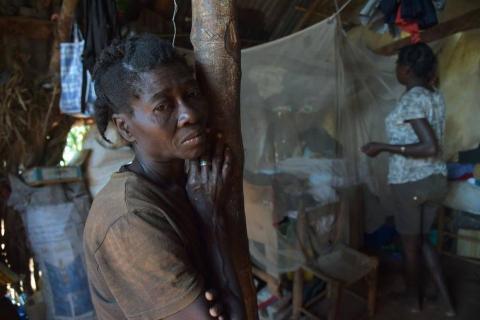 Six months after Hurricane Matthew tore through Haiti’s southern peninsula, shelter and food remain scarce especially in remote, difficult-to-reach areas. El-Mostafa Benlamlih, the United Nations’ humanitarian coordinator and head of the U.N. Development Program for Haiti, said he would not describe the situation as a famine but “it could get close to that” if nothing is done and the hurricane-ravaged areas miss another planting season. “If now we miss this one, this season, which is the main season for agriculture ... then we will be in deep trouble in May, June and July,” Benlamlih said in a Miami Herald interview. “There are pockets of food insecurity particularly in remote areas...[People] don’t eat enough. They have to use coping strategies like drop one meal or send the kids to the uncle or family in Port-au-Prince. That’s what they are trying to do to survive.”

Benlamlih had just gotten back from four days in the southwest and Grand’ Anse regions where Matthew’s 145 mph winds struck the hardest, flooding streets, destroying homes and uprooting fruit-bearing trees. He went there shortly after South Florida-based charity Food For The Poor sounded the alarm on what it said was a food shortage in the regions so severe “that families have turned in desperation to fruits and foliage known to be poisonous, if consumed uncooked, in an attempt to quell their hunger and save their lives.” At least 13 people had died over the span of 10 days in the Grand’ Anse, the charity said last month after reporting that one of its teams had come across 240 people, including 84 women and 62 children, living in a mountain cave in Fonds Rouge Dahere, a rural village in the outskirts of Jeremie, the capital of the Grand’ Anse. Also in March, Haiti’s agriculture agency reported that more than 180,000 people in the Grand’ Anse were living in an “emergency situation.” In response to the crisis, charities such as Food For The Poor and Pompano Beach Cross International, rushed container loads of food to the region for distribution to families.

With the international spotlight on the Haitians living in caves, Haitian President Jovenel Moïse and newly appointed Prime Minister Jack Guy Lafontant immediately arranged a trip to the area. There, Moïse — who later called a meeting with foreign diplomats representing Haiti’s major donor countries to ask for better coordination of humanitarian aid — announced that the government was taking charge of the situation. It would build houses for the cave dwellers, and start a community restaurant to feed villagers, the president announced. “We came to see with our eyes, and to tell you,” Moïse said standing in front of a cave in Fonds Rouge, “I don’t agree with anyone on this earth using your misery for political gain.” Nearly two weeks after that visit, despite a tweet by the presidency that the community restaurant had been operational since April 1, a local priest and a community leader told the Herald that housing and food are still difficult to find. The restaurant, they said, isn’t functioning.

“On the promise of the president, everyone left the cave,” said Jean-Berlin Depeine, a father of two and leader of the group in the cave who said he sought refuge there after Matthew destroyed his home. “Up until now, the people haven’t found any housing.” Father Edison Barthelemy Feuille, a local priest who worked with Food For The Poor, said even the charity has stopped distributions after the president’s visits. “In Fonds Rouge, the situation remains complicated,” Feuille said. “The people need some kind of humanitarian intervention in order for them to survive.” Feuille and Depeine both said they saw a truck come through Fonds Rouge on Tuesday with cooked rice and beans and “some kind of meat.” “But it wasn’t even enough — maybe it could have fed 40 people,” Feuille said.

A presidential spokesman and adviser did not respond to a Herald inquiry about the current situation in Fonds Rouge. The storm created $2.8 million in damages, which is one-third of Haiti’s gross domestic product, or “the equivalent of what the diaspora is sending to Haiti in a year,” Benlamlih, the U.N. humanitarian chief said. “It didn’t just affect the income of the people, but also their capacity to produce,” he added. While the humanitarian response provided water, food distributions and temporary shelter in schools to many of the 2 million people who were impacted by the storm, Benlamlih, who only recently arrived in Haiti, said there wasn’t enough focus on recovery in the early days after the storm. “Not enough attention was paid to putting those people back on their feet for them to be able to produce what they have lost. They have lost their trees like mango and breadfruit... They must be able to produce this year,” he said. Meanwhile, interest in the recovery process has waned just when Haitians need it the most.

After Matthew, the United Nations issued a $139 million emergency appeal for humanitarian aid of which only $86 million was funded, according to the report on its website. For this year, the global body is seeking $250.3 million for Haiti to meet the needs of Matthew victims and also other humanitarian assistance. “We still have 1 million people who receive aid, still in need of help," Benlamlih said. “All sectors are affected. Fisheries, agriculture, infrastructure is affected. “A lot has been done but more needs to be done,” he added. “We still need humanitarian assistance and to help this country have more options.”