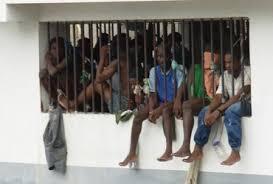 Haiti announced a new government commission on Friday to probe the country's prisons and other overcrowded lockups and make recommendations to improve desperate conditions for inmates.  President Jovenel Moise, who was sworn in earlier this month as Haiti's leader for the next five years, announced the creation of the nine-member commission on Friday. The panel will have a month to finish its review and submit a report.  "Under my presidency, the Haitian nation will by no means ignore what seems to be a flagrant violation, even a contempt for the right to life that every individual should have, regardless of where he lives," Moise said in a late Friday statement.  The presidential announcement came a few days after The Associated Press published an exclusive report on an upsurge of inmate deaths, including 21 last month at the country's biggest prison, due in large part to malnutrition-related illnesses and other preventable diseases. An AP team saw a corpse and emaciated men with sunken cheeks and protruding ribs at the infirmary at Haiti's severely overcrowded National Penitentiary, which houses some 40 percent of the country's inmates in squalid conditions.

Prisoners were crammed shoulder-to-shoulder in cellblocks so overcrowded they are forced to sleep in makeshift hammocks suspended from the ceiling or squeeze four to a bunk. New arrivals jostle for space on filthy floors where inmates on lockdown 22 hours a day must defecate into plastic bags in the absence of latrines. Conditions are also appalling at other Haitian lockups, including severely overcrowded and unsanitary pens at several police stations. Most of those incarcerated in Haiti have not been convicted of a crime but are held in prolonged pretrial detention, often for years, waiting for a chance to see a judge. Haiti's penal system is by far the globe's most congested, with a staggering 454 percent occupancy level, according to the most recent ranking by the University of London's Institute for Criminal Policy Research.

Prison authorities told the AP that they try their best to meet inmates' needs, but repeatedly receive insufficient funds from the state to buy food and cooking fuel, leading to deadly cases of malnutrition-related ailments such as beriberi and anemia.  U.N. Special Representative Sandra Honore said this week that 42 detainee deaths so far this year are linked to "the worsening of cruel, inhuman and degrading" conditions.