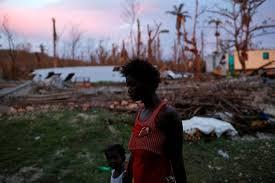 (Reuters) Haitian police have arrested nine people in connection with sex trafficking, involving girls as young as 13, highlighting the dangers facing children in the Caribbean nation where human trafficking is rife and the crime often goes unpunished. The sting raid by police on Sunday at a resort hotel, Kaliko Beach Club, near the Haitian capital, Port-au-Prince, led to the rescue of at least 31 women and girls, police authorities said. "These people are suspected of trafficking in minors and of sexual exploitation," said Gary Desrosiers, national police deputy spokesman, in an interview with local media. The victims were rescued following a two-month investigation, he said.

During the operation, police seized Haitian and U.S. cash, a computer containing pornographic images of children, and drugs including cocaine, the authorities said. Hotel owner Fritz Paret said the hotel does not tolerate the sexual exploitation of children and had no knowledge about what was going on. "We were not aware because they were just like our regular guests coming in," Paret told the Thomson Reuters Foundation in a telephone interview on Tuesday. He said a group of American and Canadian tourists checked into the hotel and booked 22 rooms and paid for day passes for the children to use. "The children came in dribs and drabs under a day pass," Paret said.

According to the U.S. State Department's 2016 Trafficking in Persons Report, Haiti is a source, transit, and destination country for men, women, and children sold into forced labor, domestic servitude and prostitution. Traffickers are known to sell children into the sex trade in Haiti and across the porous border into the Dominican Republic. In 2016, the U.S. State Department downgraded Haiti to its lowest grade - tier 3 - for human trafficking centres, meaning Haiti is not making significant efforts to meet the minimum standards to combat trafficking and prosecute perpetrators. Under Haiti's 2014 anti-trafficking law, those convicted of human trafficking can face from seven years up to life imprisonment.