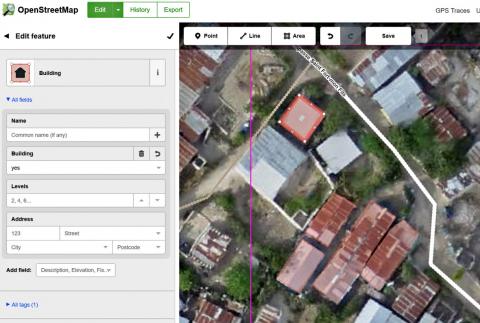 Imagine the frustration that organizations face when they have the resources to respond to vulnerable communities, but lack the technology to navigate to them? Haiti’s capital, Port-au-Prince, is one urban area with “off the map” locations that prevent humanitarian aid from reaching those in need. In September 2016, we embarked on a crowdsourced initiative to fill the gaps in digital maps. Remember how complicated it used to be to find your way around before Google maps? While many towns and cities across the globe are now easily navigable via digital maps, there are still many parts of the world that are a mystery — even to the little blue dot!

That’s where the innovative Missing Maps project comes in — using volunteers to fill gaps in maps that would otherwise keep humanitarian workers from accessing certain communities. Late last year, Concern got involved in this important crowd-sourced effort, and you can get in on the action, too. According to MissingMaps.org, disasters around the world kill nearly 100,000 and affect or displace 200 million people each year. The initiative was created to tackle the lack the information that first responders need in order to make valuable decisions regarding relief efforts. Missing Maps is a collaborative project that invites anyone and everyone to use freely-available satellite imagery and location data to enhancing digital maps. These volunteer-created maps can then be used by humanitarian organizations to plan community projects and development programs, as well as respond to emergency situations.

Haiti’s capital, Port-au-Prince, has been a focal point of Concern’s mapping efforts so far. For over 20 years, we’ve been working with communities in Haiti to make sustainable improvements in poverty levels and strengthen resilience to disasters, and much of that work has been in the neighborhoods of Port-au-Prince. However, until recently many of these densely-populated areas were only partially mapped, with many areas still missing basic information, such as buildings and roads. The lack of reliable location data made planning and implementing projects much more difficult. Improved maps are hugely helpful to Concern’s response to emergency situations like Hurricane Matthew.

This past summer, ESRI Ireland kindly offered to help Concern add details to the open source maps of the areas where our beneficiary communities live and work. Together we planned a series of “mapathon” events — an increasingly popular way for people to gather, help each other learn mapping software, and map in groups. In late September, Concern was thrilled to join up with more than 35 volunteer staff members from ESRI Ireland for our first mapathon. The target areas of this first session were Bois Neuf and Cité Gerard — two densely populated Haitian neighborhoods near the coast in Port-au-Prince. After an introduction to our programs in Haiti, volunteers began carefully tracing buildings and roads in Bois Neuf and Cité Gerard using drone imagery from 2014. Our mapathon tool was the easy-to-use Humanitarian Open Street Maps (HOT) task manager, which looks like this:  The team started by highlighting a grid of 106 tiles, which made up the area to be mapped. By lunch, we had mapped all the tiles, and by the end of the day all 106 tiles were validated in green. Our calculations indicate that the mapathon added 1,448 buildings and almost 6 miles of road that day — a great result and a solid start to improving the city’s digital maps!

Hurricane Matthew hit Haiti just two weeks after our first mapathon event. The category 4 storm caused great damage and left 1.6 million people in need of humanitarian assistance. Three months later, Concern is still helping communities recover and protect themselves against future flooding and water-borne diseases like cholera. To support Concern and other humanitarian organizations working in Haiti, new HOT tasks have been set up, and the response has been fantastic: “the generosity of volunteers and large organizations who support Missing Maps is great to see,” said Ellen Ward, GIS Project Lead at Concern. “The community meets regularly to share updates on events and discuss the mobilization of volunteers in order to create maps that can be used now and in the future. It’s really good to work with the HOT and Missing Maps communities who understand both innovative technologies and the challenges that organizations face when working with people in hard-to-reach locations.”

In early December, Concern’s headquarters in Dublin was the site of a second mapping event that focused on three districts in Cité Soleil, Haiti, to support new programming over the next five years. The project will continue in 2017, with the hope that university students in Belfast and Dublin will join in. Remember, anyone can contribute to Missing Maps projects by visiting MissingMaps.org. If you would like to get involved with the Concern project please email ellen.ward@concern.net and follow @TheMissingMaps on Twitter.