Lessons From the Storm: What Haiti Can Teach Us 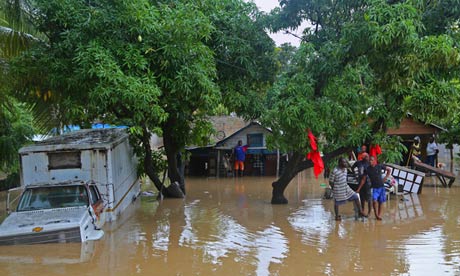 The superstorm blasting its way through the most densely populated region of the United States is leaving its predicted trail of destruction. Floodwaters have inundated city blocks, and storm tides are pulsing up rivers and canals. Understandably nervous people in the path of the ex-tropical menace are beginning to speculate about what might come next. On Monday, the Drudge Report issued its siren warning: “Gangs Plan Hurricane Looting Spree Via Twitter.” Business Insider intoned: Prepare For a Wave of Looting After Hurricane Sandy. “If police reports following Hurricanes Katrina and Irene are any indication, the East Coast is in for a crime wave,” writer Abby Rodgers warned.  While I can’t offer much solace about the storm surge, I do have good news about the impending social meltdown: it’s a myth. Fears of wanton lawlessness, panic, and doom follow most every natural disaster, but they almost never come true. In fact, the myth itself is potentially a greater danger—prone to impeding efforts when help is needed most. I know this, because I lived though one of the worst disasters imaginable.

On Jan. 12, 2010, I was inside my house in the hills above Haiti’s capital when the floor dropped and the walls began to crumble. In less than a minute, the deadliest earthquake ever recorded in the Western Hemisphere tore through a metropolitan area of three million, destroying infrastructure, knocking out an already feeble power grid, impaired an already fragile food supply, and killed an estimated 316,000 people. Countless more were injured or made homeless. As people around the world rallied to Haiti’s aid, they brought the same fears that Drudge and Rodgers are stirring now: that survivors—especially, as the myth often has it, poor, black survivors—are bound to panic, loot, or react with violence. This fear over looming anarchy is part of what prompts authorities to favor a military-led response. At home, that means mobilizing thousands of National Guard units. In Haiti nearly three years ago, that concern is much of the reason that the U.S. military was the leading presence in the quake zone for months after the aftershocks subsided—22,000 soldiers, sailors, airmen, and Marines deployed at the height. A panic over impending chaos also fueled the civilian response, with aid groups pleading for donations on exaggerated descriptions of a disaster zone with “no food” and “no water,” prompting kind-hearted donors to flood the zone with an uncoordinated barrage of bottled water, latex gloves, and in one weird case, wooden hand puppets.

Yet for those of us who called the quake zone home, it was a very different experience. The sense of community in Port-au-Prince didn’t just unravel, but became stronger in those weeks after the quake, with people across Haiti putting aside vicious political squabbles and deep-rooted differences of race and class to focus on the immediate challenges of survival and coping with tremendous loss. Though authorities and many of my colleagues in the media fixated and exaggerated isolated pockets of presumed looting, lawlessness was isolated. Inexperienced journalists spread reports of “rioting”—often little more than pushing and shoving—at aid distributions made far more chaotic by pepper-spraying U.N. soldiers than malice. Many of the most widely reported events involved people just trying to dig food out of fallen buildings. I don’t mean to make the situation in Haiti sound benign. Life in the quake zone was hard, and got harder as time went on. But that had far more to do with Haiti’s chronic want and the unnerving drumbeat of constant aftershocks than any lack of social cohesion. Yes, there were gangs in Port-au-Prince fighting low-intensity turf wars in the slums. And one bright morning, I ran across a pair of young men bleeding in the street, freshly executed with a shot to the back of their heads—by whom, no one would say. But such crimes were, if anything, more rare than they had been before the quake. And those two men killed? Witnesses said they had been caught stealing.

As those of us in Haiti found after the earthquake, when survival is on the line, the people around you are all you’ve got. ndeed, law-and-order authorities found themselves with little to do. Most of the U.S. troops, sent to contain a societal meltdown, never left their ships. Hard-hatted foreign rescuers got the headlines, but due to inflated security concerns concentrated on a few high-profile sites and rescued only a handful of people. Haitian neighbors helping one another carried out the vast majority of rescues, ad hoc. And while the relief effort did fill crucial supply gaps and provided some lifesaving aid, the price of panic was an uncoordinated, uneven, sometimes paranoid response. The top-down “command-and-control” structure overcentralized the effort, leaving whole cities unattended for days while panicking responders duplicated efforts and wasted resources. The groundwork for a long-term recovery was botched. In Haiti, where there are still no federal or local agencies competent to deal with that magnitude of a catastrophe, the result has been more suffering. This month in Haiti alone, Hurricane Sandy's floods and winds, though merely sideswiping the island nation as the storm headed north, killed at least 52 people.

This disconnect, between what we expect from disasters and what is likely to occur, is common. “When people think of disasters, the common image is one of social breakdown,” Erik Auf der Heide, a disaster-management expert, has written (PDF). “In contrast, researchers have found—at least in the immediate aftermath of disasters—that community resilience and unity, strengthening of social ties, self-help, heightened initiative, altruism, and pro-social behavior more often prevail. In short, when things are at their worst, disaster-stricken communities tend to rise to the occasion.” A terrific 2009 book by Rebecca Solnit, A Paradise Built in Hell, recounts the way people in disasters from Katrina to the 1985 Mexico City earthquake to a 1917 ship explosion in Halifax, Nova Scotia, showed their best qualities in the wake of disasters, even when authorities came expecting the worst. The “looting” article Drudge shared with his million daily readers is laughable at best, conflating obvious jokes (“I’m looting today in preparation for the hurricane,” reads one quoted tweet) with persistent legends from the past. A constant theme is a return to the supposed war zone–like nature of New Orleans after Hurricane Katrina, even though studies and journalistic investigations after the fact have consistently shown that widely held perception was false. In one famous case, apoplexy over an imagined rash of sniper shootings provided cover for a group of police who in fact shot a group of unarmed people crossing a bridge, killing two. It was only later, after most of the public stopped paying attention, that the murdered victims were exonerated in the media, and the police convicted in court.

Panic mongering serves no one. The mistaken presumption that only “strong, central, paramilitary-like leadership can overcome the problems posed by a dysfunctional public suffering from the effects of a disaster” is counterproductive, Auf der Heide writes. “Authorities may develop elaborate plans outlining how they will direct disaster response, only to find that members of the public, unaware of these plans, have taken actions on their own.” Because we are most often our own families’ and neighborhoods’ first responders, positioned to help long before authorities can arrive, those authorities’ essential efforts are most effective when they follow the lead of the affected population. State resources should maximize, and not supplant or suppress, their efforts. Jokes about an impending apocalypse are good for breaking the tension (“Wondering when we should start eating people?” a friend in Brooklyn asked on Facebook ahead of the storm), but those living in the disaster zone have to face a more banal reality: most of us will survive and should be prepared for a long, often inconvenient, aftermath. In the time between disasters meanwhile, knowing as we do that climate change and growing populations are making cities from New York to Shanghai more vulnerable than ever, we should patiently but determinedly support efforts to prepare everyone.

Most important, the expectation that a society challenged will break down should go out the door. It doesn’t happen. If senseless looting and killing is unthinkable to you, it’s probably unthinkable to most everyone around you. It’s our suspicion—the supposition that some group of people, some element of society, is a monster waiting to be unleashed by the wrath of the earth—that poses a greater threat when help comes calling. As those of us in Haiti found after the earthquake, when survival is on the line, the people around you are all you’ve got. It’s a shame that it often takes living through a disaster to learn that.